'We Con the World' — Banned by YouTube, Now in HD on PJTV

While its ultimate impact on ending African hunger may have been dubious, the childlike melody and sanctimony of “We Are the World” has made it one of the most parodied songs of the last 25 years. Everybody from In Living Color in 1991 to Saturday Night Live in 2010 have parodied it. (Al Gore’s “Live Earth” concert in 2006 may have been the most extreme parody of all.)

So when the satirical Israeli website Latma TV created “We Con the World” earlier this month, and after it received over three million views on YouTube, it came as quite a surprise when YouTube caved to censorious interference from Warner/Chappell Music Inc. and pulled the original video. 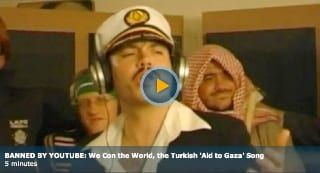 As Caroline Glick, the editor-in-chief of Latma and a senior contributing editor of the Jerusalem Post, said yesterday,  “It’s not as if a clip that has been seen by 3.5 million viewers is just going to disappear.”

It’s true we make a better day just you and me, so let’s start clicking.