Everyone who has ever been born has had a mother; most women have been mothers; women have been mothering children since the dawn of time. Historically, most women have spent up to twenty to forty years of their lives being pregnant, giving birth, breastfeeding, and tending children and grandchildren. Until recently — and still today — this meant facing an agonizing labor, potential death, or lifelong injury for the sake of perpetuating the human race. 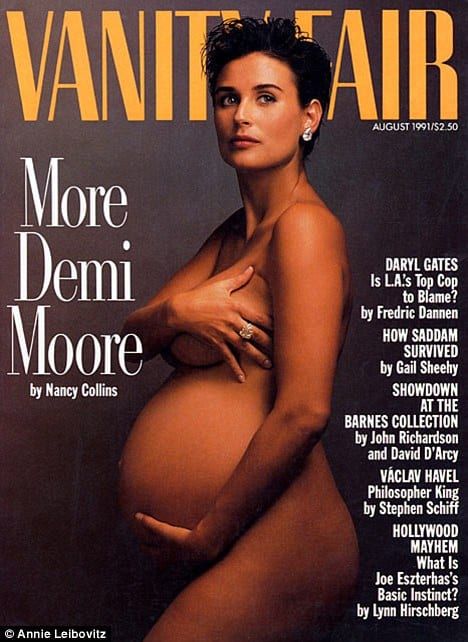 A rare sight to see on the cover of Vanity Fair.

Where, then, are all our MOMs — our Museums of Motherhood? Until last month, there were no such museums, at least not on planet earth. But on Sept 1, 2011, the visionary and energized Joy Rose, a mother of four, a rock musician, the founder of “Housewives on Prozac” (1997-2007,) and an organizer of countless conferences, fairs, and festivals for mothers all over the country, opened the first such museum. It is located not far from where I live on the Upper East Side.

Visiting it is a redemptive experience. In non-motherhood museums, in marble silence, women are hanging, beautifully clothed and beautifully naked, painted by great artists who loved the female body. Strange how few of them are pregnant. A hint, a swelling, a critical interpretation is all we have to represent the most common female experience in history. Similarly, there are few high fashion models who are shown while pregnant. Imagine the demoralizing psychological effect this has on women who understand that pregnancy and motherhood, or at least pregnancy and womanhood, go together. Those women who want children desperately and who love being mothers do not see themselves and their choices valorized or even depicted in High Culture.

Here at MOM, the Museum of Motherhood, pregnant women, women in labor, and mothers with children are cherished and displayed throughout the museum as brave champions. The subject is not hidden because it is sacred. It is honored for precisely this reason. The cheerful, brightly colored space is filled with artfully painted plaster casts of real women’s pregnant torsos — like so many modern-day versions of ancient fertility goddesses, like so many Venuses of Willendorf.

An increasing number of contemporary women are casting themselves while pregnant. Here, at MOM, they can have an artist paint it to their specifications. The museum also displays and sells a “pregnancy vest” that weighs 40-60 pounds, the amount of weight that many women gain while they are pregnant.

The pregnant woman has also become a source of inspiration for many photographers, painters, and sculptors. The works of Alexia Nye Jackson (who created the installation “Mother: The Job”), Deborah Putnoi, Ella Dreyfus,  Jo Jayson,  Elizabeth Coe Sheehan and Joy Rose, Paula Rendino Zaentz and Ronnie Komarow are on display. Artist April Bey has been acquiring and painting the mannequins that dressmakers once used to fashion dresses for pregnant women. Bey’s mannequins are vividly striking and boldly colored. They are the kind of work that may soon go on display at the MOM. 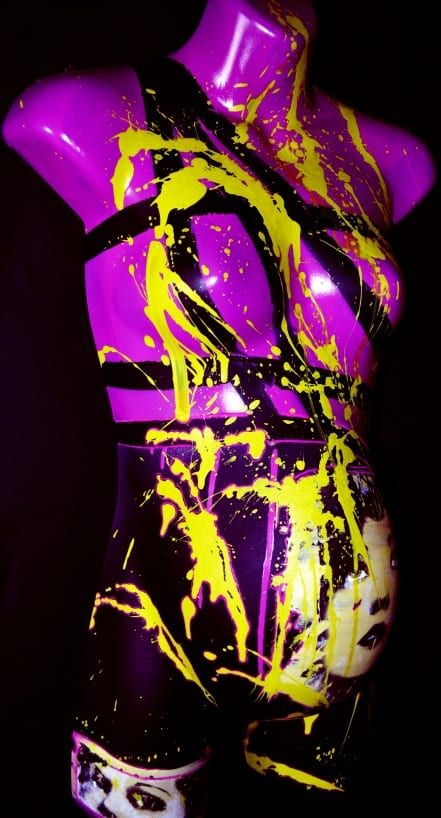 I’ve described visiting MOM as a “redemptive” experience. Here’s why.

Before I became a mother, my ego knew no bounds. I thought I could overcome all obstacles through force of will, not by bending to circumstance, or trusting in forces larger than myself. For me, motherhood was something of a reverse Zen experience. Having a child was a passage from detachment to attachment.

Becoming a new-born mother changed my life. It humbled me, slowed me down, made me kinder, and infinitely more vulnerable to cruelty. I learned that life does not stand still, that it is always changing, growing, dying, being renewed. For years, when I had looked in the mirror, I always looked the “same” to myself. Time became real for me when I began to measure it by my beloved son’s obvious, visible growth. Time became more finite.

I comprehended, in my body, that one day I would die. I quickly came to understand that pregnancy and newborn motherhood was one of the greatest human rites of passage. I needed to read books — even one book — with this perspective as I was going through this experience. It was 1977, and there were no such books to be found. I decided to write the kind of book that I needed to read.

I could not easily find a publisher. One female editor literally said: “What is this bulls***? You can write a ‘real’ book, why waste your time on this non-subject?” A male editor at another publishing house, whom I’d never met, told my agent: “What could she possibly write about pregnancy or motherhood? She’s a feminist, a career woman, she’s not a ‘normal’ woman and she can’t be a ‘normal’ mother.” A third publisher said that the subject had already been “done.” Ah, by whom I asked: Homer, Dante, Shakespeare, Cervantes? Proust, Hemingway?

And so I came to study and write about the experience of motherhood for the next thirty three years. I published With Child. A Diary of Motherhood, (1979); Mothers on Trial: The Battle for Children and Custody (1986), and Sacred Bond: The Legacy of Baby M (1988); I have just published an updated twenty fifth anniversary edition of Mothers on Trial with eight new chapters. This work documents motherhood under siege, what “good enough” mothers must endure when their custodial right to mother is unjustly challenged, often by violent fathers, sometimes by “good enough” fathers.

I did not expect to see a museum such as this in my lifetime.

But, then came Joy with her infectious optimism, passion, and deeply spiritual nature, an essence coupled with a very American “take charge, can do” attitude. Joy is tall and blonde and beautiful but she is also incredibly maternal, protective towards other women. She wears a lot of “magic” jewelry (amulets, etc.) and sometimes frosts her hair bright pink.

Joy describes MOM as a “pop-up exhibit,” one which will last for four precious months in a 2,500 square feet space. 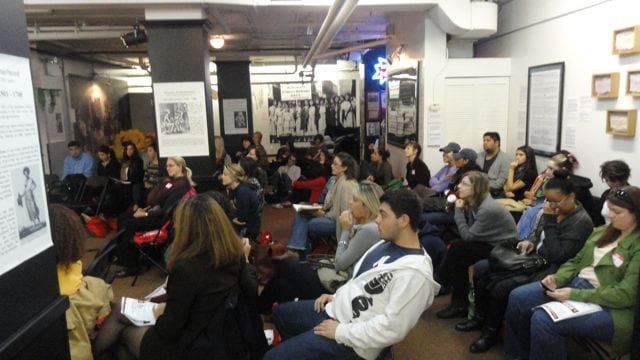 The Museum of Motherhood smells good. The air is perfumed. The ambience is a cross between Gymboree (from whom she is renting the space), and a fantasy country fair. It has many different “areas” including a “Greif-fitti” wall, where “stories of grief and loss can create a path to healing.” MOM has visual displays, historical photos of and information about suffragists,  information about ancient and medieval birth practices, films, rotating photography and art exhibits, and an arresting list of the tasks which every mother performs and what purchasing those tasks would cost on the open market. Joy Rose and her team (of both men and women) also co-ordinate writing and art workshops, poetry “slams,” musical performances, all-day conferences, and events for children. 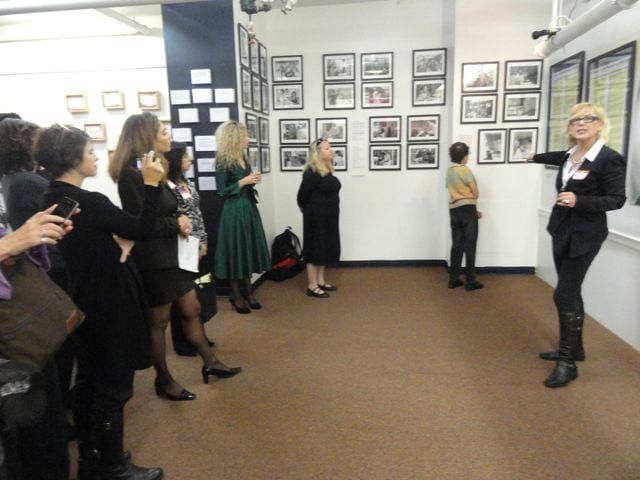 I recently took a quick, private tour and was charmed by the mother-friendly, child-friendly, atmosphere and by the sweetness of Joy’s right hand man, Paul White, who helped Joy show me around. Then, I interviewed Joy:

Q: What motivated you to establish the Museum of Motherhood?

A: We have mustard museums, marble museums, car museums, but until now, there have been no museums dedicated to this all important job of creating the next generation of human beings. This museum will give all of us an opportunity to study and understand this most important job of “mother.”

Q: When did you start this work?

A: This has been a project of a lifetime. It has been years in the making and there has been, at any given time, a small group of dedicated individuals who have given generously of their time to make this museum happen. This first exhibit, as part of our Pop-Up museum, brings home to New York City the fruit of conferences, exhibits and festivals around the world.

Q: When did you become interested in motherhood as a subject?

A: The obvious answer is: after I became a mother.

Some things have not changed. For example, quality child care is still beyond the economic reach of most families. Upon divorce, child support payments are minimal or non-existent especially among families where one or even both earners make only minimal income.

But here’s what has changed in the last forty years. In the past career women were often asked to choose between their jobs and motherhood, and were given no time off, certainly not with paid maternity leaves. Now, some are — and there are some paternity leaves, too. In the recent past, universities did not offer courses about motherhood. Now some do. There were never any conferences, academic or otherwise, which focused on this life-changing and life-bringing event. Now there are some. Joy herself organizes many and I have had the privilege of speaking for her. Where once there were few books about pregnancy, labor, newborn motherhood, lifelong motherhood, motherhood under siege — there are now many such books.