(UPDATED) On the Scene in Joplin

UPDATE: The Joplin Globe is now reporting 116 dead. More than 1,000 people have been transported to area hospitals and there is every indication the death toll could go still higher. Hampering the search and rescue efforts is the continuing severe weather. The Joplin area has been under severe thunderstorm warnings several times today and the entire Four States region is under a flash flood warning.

Even more frightening, I talked to the National Weather Service this morning after I submitted the story and meteorologists are calling for an elevated risk for tornadoes Tuesday. Joplin is by no means out of the woods and the severe weather is expected to continue until at least Wednesday or Thursday.

Adding insult to injury, the flash flooding will impact both the corn and wheat crops adversely. This is a farming area and with the loss of jobs due to the tornado, the economic impact of a bad crop or two will be a difficult burden to bear for the communities in the metro area.

I heard the news that a tornado had struck Joplin, Missouri, at about 6:15 p.m. on Sunday.

This was devastating news, as Joplin is only about 20 minutes from the small southeast Kansas town where I live.

As a journalist my job was clear — I had to climb in my car and go get photos. It is in some ways a ghoulish way to make a living. We don’t always like parts of our job, but we do what we must. 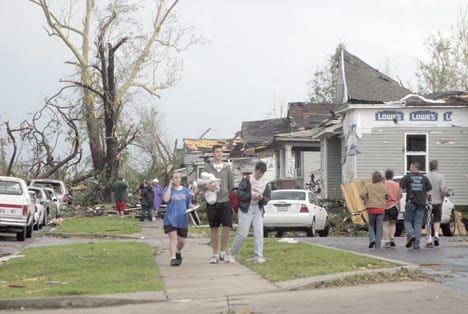 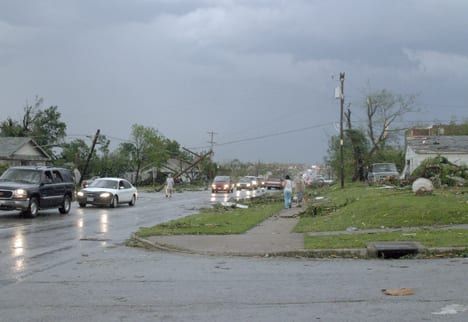 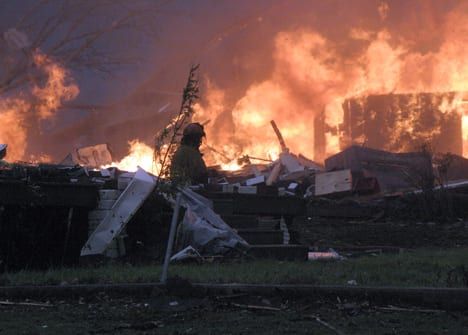 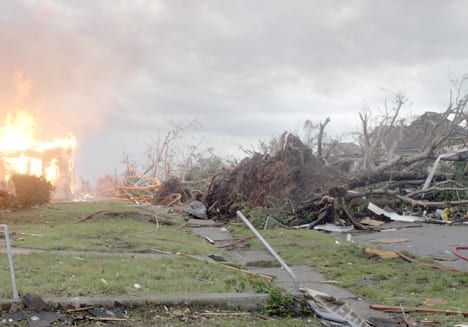 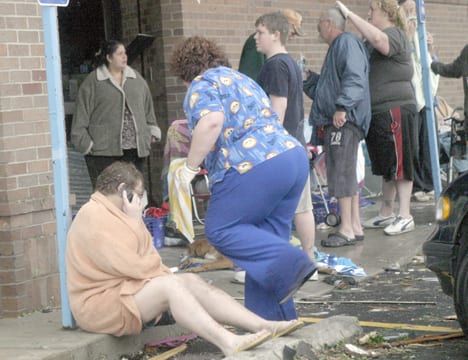 What I saw was utterly impossible to describe. National Weather Service Meteorologist Doug Cramer told me on Monday the twister was an EF-4 or possibly EF-5, but the damage was so extensive it may be days before a final determination can be made. Ninety people are dead as of this writing.

As a human being I found it impossible to leave without helping, and stopped to give what little aid I could.

There was a Walgreens on the corner of 20th and Main that I had to walk past to get back to my vehicle. The windows were blown out and much of the roof was gone, but the sturdy brick building was still standing. The workers had simply come out with medical supplies, towels, blankets, whatever they could find and started helping people.

I stopped there to both take a couple of pictures and help. I spent the next couple of hours giving first aid.

It was like a scene from a disaster movie. I must have bandaged a dozen bleeding scalp wounds. As I was putting a blanket around an elderly woman who was cold, wet, and in shock, I said to her: “Here’s a nice warm fleece blanket.” My heart broke as she replied in a shaky voice: “I’d rather have my nice warm house.”

I watched a house burn, as frustrated firefighters stood by helplessly — they had trucks and hoses, but no water.

As I was walking away from the fire I saw a couple walk up. They said they thought it was their neighbor’s house on fire. As I told them it was gone and the firefighters had no water, the woman’s hands suddenly flew to her mouth as she wailed: “Oh, my God that’s our home.”

Words cannot begin to describe the total destruction of the thriving community. Most people in the surrounding area both work and shop there. The tornado devastated the shopping district. One of the two Wal-Mart stores in the city was hit, as was Home Depot.

Thousands of homes are simply gone. As of this writing cellular and land line phone service are both spotty, the Internet is down over most of the town, and electricity is still out for almost all of the city.

Emergency personnel from all the surrounding towns simply hatted up and went over. Normally they wait for a request to come in, but there was no way to contact anyone in the command structure in Joplin, so first responders simply went looking for road blocks to ask where they could be of help.

While there has been some looting, and there always is in a disaster like this, for the most part Joplinites have responded the way Midwesterners always do — they dug themselves out of the rubble, brushed themselves off, got their sense of humor in place, and went looking for someone in worse shape than they were to help.

I don’t know what the future holds for Joplin; it takes years to bounce back from something like this. I do know the town will be back, better than ever.

Please pray for Joplin and its people. That can’t hurt either.

Patrick Richardson has been a journalist for almost 15 years and an inveterate geek all his life. He blogs regularly at www.otherwheregazette.com, which aims to be like another SF magazine, just not so serious.
Read more by Patrick Richardson
SHOW COMMENTS