On Monday evening the bodies of Naftali Frenkel, Gilad Shear, and Eyal Ifrach, the three Israeli teenage boys kidnapped on their way home from school on June 12, were found by Israeli forces and volunteers in a field northwest of the West Bank town of Hebron, very close to where they were kidnapped.

Trying to hitch a ride home on the evening of the 12th, they were shot dead, it turns out, very soon after entering the car of the Hamas kidnappers—either because one of the three boys, Gilad, managed briefly to phone the police or because that was the terrorists’ intention in any case. If it was not their intention, then they likely aimed to sequester Naftali, Gilad, and Eyal somewhere and try to extort a prisoner swap from Israel.

That detail is still not known because the two Hamas operatives the Israeli authorities have fingered as the kidnappers, Hebron residents Marwan Kawasmeh and Amar Abu-Isa, are still at large. Meanwhile, on Tuesday afternoon, the three Israeli boys were buried together in the Israeli town of Modi’in even though they lived in separate communities. The joint funeral was attended by tens of thousands, with eulogies by, among others, Prime Minister Binyamin Netanyahu and President Shimon Peres.

So ended 19 days of tension and hope, marked by an upsurge of the extraordinary solidarity that lies at the deepest stratum of Israeli Jewish society, despite often bitter fractiousness. They were also 19 days of intensive activity by the Israeli security forces, who, in addition to searching for Naftali, Gilad, and Eyal, arrested hundreds of Hamas operatives, confiscating the terror organization’s funds and closing its institutions and media outlets.

And since, in the Middle East, one does not get the luxury of fighting only on one front, these have also been ongoing days of rocket fire from Gaza. Though the launchings were attributed to small groups acting in defiance of Hamas, on Monday morning Hamas itself fired a large volley at Israel. On Monday night Israeli planes hit 34 Hamas and Islamic Jihad targets in Gaza.

During the funeral itself, the Middle East continued its assault on fundamental human norms as Gaza terrorists fired a salvo of mortar shells into Israel.

On Tuesday evening the Israeli dynamic of solidarity and fractiousness continued as the Israeli cabinet convened amid reports of sharply differing views on how, and at what level of intensity, to keep waging the fight against Hamas.

But while it was too early to know what course Israel would take, it is not too early to cite some points that emerge from this latest episode of Israel’s long battle for life amid a culture of death. 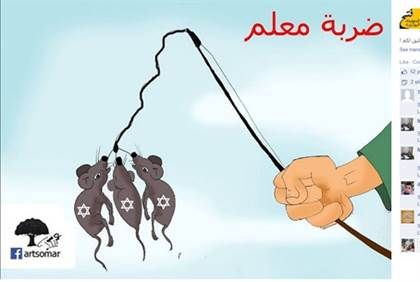 First, though it is more congenial for many people to put Hamas in the villain’s role among the Palestinians, the kidnapping of the three boys actually proved so popular in the Palestinian street at large that notions of Israeli-Palestinian “peace”—not as a possible pragmatic situation but as some sort of grand denouement—need to be shelved indefinitely. A single condemnation of the kidnapping in Arabic by Palestinian Authority president Mahmoud Abbas, six days after it occurred, is hardly enough to offset a Palestinian social media campaign celebrating the abduction, repulsive iconography on the official PA Facebook page and elsewhere, and now the misrepresentation of the murdered boys—two of whom were 16—as “soldiers” by, once again, Abbas’s own party.

Second, on the other side of the political spectrum, calls for Israel to annex the West Bank and incorporate the two million—or it may be somewhat fewer—Palestinians living there need to take reality into account. Apart from the sickening display of enthusiasm for the abduction these past weeks, a poll last month found 60% of Palestinians saying their goal is “reclaiming all of historic Palestine, from the river to the sea” and nearly two-thirds saying “resistance should continue until all of historic Palestine is liberated.” While the annexationists speak of offering Israeli citizenship to this population, they do not seem cut out to be good Israeli citizens or partners in the Zionist enterprise.

And third, while the kidnapping and murder of the three boys is horrific and rightly evokes outrage, Israel is not suffering a terror epidemic. The number of Israelis killed by Palestinian terror so far this year—Naftali, Gilad, and Eyal along with Baruch Mizrahi—is four. In 2013 there were six, in 2012 eight, in 2011 fourteen, in 2010 eight; these are among the lowest totals in Israeli history. Netanyahu, though denounced by some as a contemptible wimp, actually seems—as in his previous two terms as prime minister—to be doing a good job of keeping things relatively quiet. Israel is facing another escalation of rocket fire and will have to deal with it, just as it has to keep cracking down on Hamas.

As always, being a Jewish state in the midst of the predominantly Arab and Muslim Middle East is not a picnic. It requires perseverance, solidarity, and often difficult decision-making. Friends of Israel need to keep this complexity in mind and not demand that Israel “make peace” with cruel enemies or blast like Rambo through all its problems.