A Review of David Solway's The Boxthorn Tree 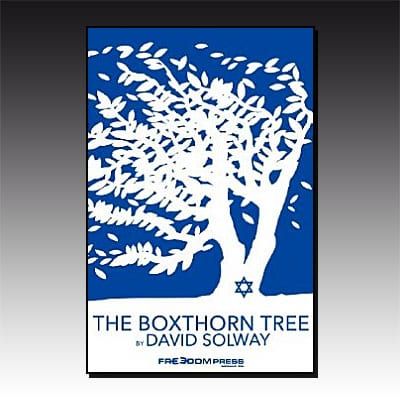 Some of the most eloquent and impassioned pro-Israeli essays in existence are to be found in The Boxthorn Tree, David Solway’s new collection. Solway — who somehow also manages to write erudite essays on a wide variety of other topics, as well as poetry — shows a masterful conversance with Israel’s history and current dilemmas, along with a sweeping command of the issues facing the Jewish people in general in a world that retains much of its age-old inimicality toward them.

This collection, which along with polemical essays offers book reviews, accounts-settlings with individual intellectual opponents, parodies, and fables, is written throughout in a dazzlingly urbane, virtuosic, sparkling prose that harks back to earlier literary tradition while remaining firmly attuned to our own morally compromised era. Much of the book is, indeed, a searing indictment of the West’s often cynical and defamatory treatment of Israel, even as it stands on the “frontline…in the war against militant Islam” and “raises…the torch of both dignity and survival.”

One by one Solway takes on the standing calumnies that pervade most of today’s media coverage of the Jewish state: that it is an “occupier” building “illegal settlements” (handily demolished with a historical and juridical overview in “Occupied Israel”); that its security fence is a cruel monstrosity (playfully and brilliantly refuted in “Loving the Wall” and “A Short Meditation on Walls”); that it is the party responsible for derailing the peace process (summarily dispatched in “Is Peace Possible in the Middle East?”); and — most absurd of all — that it is the Middle Eastern country that mistreats Christians (a brazen inversion of the truth definitively trounced in “Israel’s Oppressive Treatment of Christians?”).

And yet, with that mountain of mendacity to confront, Israel’s situation would still be relatively easier if the obloquies came only from without and not, also, from within — that is, from within the Jewish people itself. Or as Solway puts it in “The Beginning of the Night,” what is “perhaps even more disconcerting is the comparable attitude of many in the Jewish community today, mainly of the Left, who have made common cause with their enemies, defamers and traducers.” In that disreputable number Solway counts the likes of Noam Chomsky, Naomi Klein, Richard Falk, Ilan Pappe, Avraham Burg, and others, noting that “to defame an entire country with whose inhabitants one shares a cultural or genealogical relation…to support its enemies and to question its right to existence is surely a unique phenomenon.”

Unique, yes — but so are the magnitude and tenacity of anti-Semitism (or, in today’s guise, “anti-Zionism”), and it appears inevitable that some individuals among a specially beleaguered people — usually individuals most distant from its traditions and most eager for the approbation of a transnational “elite” — opt for the shameful egress of betrayal. It is that persistence of anti-Semitism — sadly trumping earlier dreams and expectations that the “normalization” of the Jewish people through the establishment of a state would put an end to the phenomenon — that forms the core conundrum of Solway’s intellectual quest in this collection.

He addresses it in the book’s longest essay, “Living in a House of Words,” a profound meditation on how, for a contemporary Jew whose life is experientially distant from the catastrophe, the immense and seemingly destructive implications of the Holocaust “may be transmuted into significance, courage and the will to survive.” The single most unique feature of the Shoah, in Solway’s view, is that “it can happen again to the same group of chosen victims.” Indeed, “The Jew remains perpetually vulnerable to the unthinkable….”

In the book’s closing essay, “Why Are Jews Different from History’s Other Victims?,” Solway further pursues that theme in the Israeli context. Jews today, he asserts — and most of all the state of Israel — are in an unenviable position as “perhaps the only people in the world who live in the crosshairs of two implacable enemies” — namely the radically secular left and radically theological Islam. The sinister upshot, visions of the remedial powers of Zionism notwithstanding, appears to be that anti-Semitism “is not a singular event but a perpetual sentence of condemnation” (italics in original).

It is a somber view of the matter, but this book also celebrates the Jewish state’s unbounded resilience, creativity in a multitude of fields, and outsize contribution to the world (“Anti-Semites and Israel-haters may boycott Israeli strawberries, but they will not put away their cell phones or mothball their computers”).  That there is work to be done — rebutting lies, insisting on affirmative, productive existence — is implicit in this book itself, a superb testament to unflagging effort and unshakable loyalty.