A sphinxlike Russian newscaster named Tatiana Limanova flipped the “bird” while pronouncing Barack Obama’s name on Russia’s REN TV – the country’s largest privately owned channel. The video of this exotic event is spreading like wildfire over the Internet as if it were a UFO sighting, causing Americans to question the algorithm of Hillary’s “reset” button. As a Russian speaker, I have received quite a few emails asking for the translation of the lovely anchorwoman’s segment. 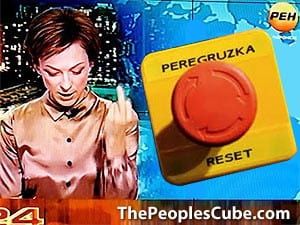 Responses to the Russian video in the American blogosphere range from marriage proposals and offers to get Tatiana on Fox News to reporting her to the White House website AttackWatch.com. Not to discourage America’s newly found respect for the Russians, it is my sad duty to inform all that the reality is less poetic, for the Russian anchor’s middle finger is not what it’s being made out to be. In case you’re wondering, this is not a parody or yet another progressive truth adjustment. Sometimes you win; not this time.

This is what Tatiana Limanova says in Russian:”Dmitriy Medvedev has become the chairman of Asia-Pacific Economic Cooperation (APEC) today.” She stutters while pronouncing the name of the summit and continues: “Previously this position was held by Barack Obama.” That’s when she flips the bird and dispassionately goes on to describe the APEC press conference in Honolulu, with Medvedev talking about the Russian-American missile treaty.

Apparently Tatiana’s gentle finger was directed at her filming crew, who probably had made comments about her stuttering in the first sentence. She heard it in her earpiece and flipped the bird in response, thinking she was speaking off camera over the footage of the conference. Reading Obama’s name as she did was a mere coincidence.

Tatiana Limanova has a reputation to uphold — after all, she is a winner of the prestigious TEFI award, presented to her by the Russian Academy of Television for being the best newscaster in 2010. Flipping the bird at another country’s leader doesn’t agree with that status, nor does it agree with the unwritten ethics of “edgy” journalism that require attacking one’s own ruling elites first. Given that REN TV is considered the last bastion of free media in Russia, an “edgy” newscaster there would sooner flip a bird to her own president, Medvedev, than to the U.S. president.

In addition, Russians typically don’t make the same distinction between the president and the country as we do; Obama for them personifies America. So if the “bird” were intentional, it would be directed at the United States as a whole rather than at Obama personally. And that is unlikely since the rest of REN TV programming is mostly made of the following American shows in Russian translation:

Furthermore, in Russia the middle finger itself is a very recent appropriation borrowed via Hollywood movies and other popular culture vehicles along with some American slang expressions, curse words, political correctness, and Che Guevara T-shirts.

The traditional Russian equivalent of the middle finger used to be “the fig” — a fist with a thumb placed between the index and the middle fingers. Since there is no significance to this gesture in the American culture, it’s easy to imagine a U.S. official, e.g., Hillary Clinton, accidentally placing her fingers in that manner over the table while dining with a Russian counterpart. That would be impolite because every Russian knows that polite people show “the fig” only with the hand hidden deep in the pocket. The televised act of supplanting it with the middle finger symbolizes not hostility, but rather a new era of Russian-American friendship, cultural exchange, and deepened mutual understanding.

A brief search of the Russian online media confirms my theory:

Tatiana claims to not have any feelings towards Obama one way or another; the finger was aimed at the camera crew while she didn’t realize she was still on.

Initially, REN TV declined comments on the blooper, while trying to pull the videos of it from popular websites. Only two days ago, Komsomolskaya Pravda reported that her network wasn’t going to punish Tatiana, who had already been shaken up enough. But that changed today with the announcement of Tatiana Limanova being fired. Apparently the world’s desire to see Obama being flipped off by a Russian TV anchorwoman had made it too big an issue for the network to handle without attempting damage control – and so it overreacted.

Consistent with the Russians’ lack of distinction between the government and the people, many headlines in today’s Russian media covering this story contain words “insult to the West.” Apparently the Russians are misreading America’s reaction just as much as the Americans misread the anchorwoman’s gesture.

Herein lies an important lesson: a random silly gesture minus cultural and linguistic context, multiplied by wishful thinking on both sides, can result in a serious international “overcharge.”

Fortunately, Americans aren’t prone to taking to the streets to riot and break things due to a perceived insult. So let’s be grateful that the newscaster’s finger went up as she pronounced “Barack Obama” and not some other random combination of words that might sound like, let’s say, “Prophet Mohammed.” That turn of events would have been much scarier, accompanied by serious material damage and loss of life — as has happened before in some other similar cases.