A previously unknown document, extracted from the Party archives in Moscow and dealing with Trotsky’s departure from Stalin’s inner circle, has made news today because it accurately mirrors Monday morning’s news story about Rahm Emanuel’s planned departure from Obama’s inner circle. Except for the names of the government officials and locations, the verbiage in the Soviet article seems to be identical to that in today’s New York Post:

MOSCOW — 1925 Kremlin Chief of Staff Leon Trotsky is expected to quit as soon as this year because he’s fed up with the “idealism” of Joseph Stalin’s inner circle, a British newspaper reported early today.

“I would bet he will go after the midterms,” a Kremlin apparatchik told the Telegraph. “Nobody thinks it’s working, but they can’t get rid of him — that would look awful.”

The apparatchik added that Trotsky is trying to line up the right job offer to explain his departure, but “the consensus is he’ll go.”

Speculation in Moscow has been building for months about divisions between Trotsky and other Stalin confidantes.

Trotsky, who has more experience in the Kremlin, has embraced tough tactics balanced by realistic compromise. But others in the Politburo have urged the use of Stalin’s soaring oratory to break through the gridlock to win major victories in their agenda. Both strategies have largely failed, leaving Stalin with only half the collectivization initiative he wanted, ballooning debt, and record-low approval ratings.

Trotsky, whose bare-knuckled politics earned him the nickname “Demon of the Revolution” when he worked in Lenin’s Politburo, is expected to step down in six to eight months, the paper said.

Despite his good relationship with Stalin, Trotsky and the Great Leader have come to an understanding that their starkly different styles don’t work together, sources said. Their closest advisers are known to have clashed — including butting heads over health-care reform — and Trotsky’s rough style has caused friction.

“The Russian people have not stood behind Stalin in the way they did for the czars and that was meant to be Trotsky’s job,” the apparatchik told the Telegraph.

In response to the report, a senior Politburo official told bourgeois news agencies the “ludicrous” story was “not worth looking into.”

Baffled by the eerie resemblance of the two documents, some experts predict that the uncanny parallel may indeed develop, with historical inevitability, into Rahm Emanuel becoming a “fall guy” for the administration, with a subsequent demonization in the media. Emanuel is then expected to publish a book titled Obama’s Gangsters, followed by an untimely death under mysterious circumstances while vacationing in Mexico. 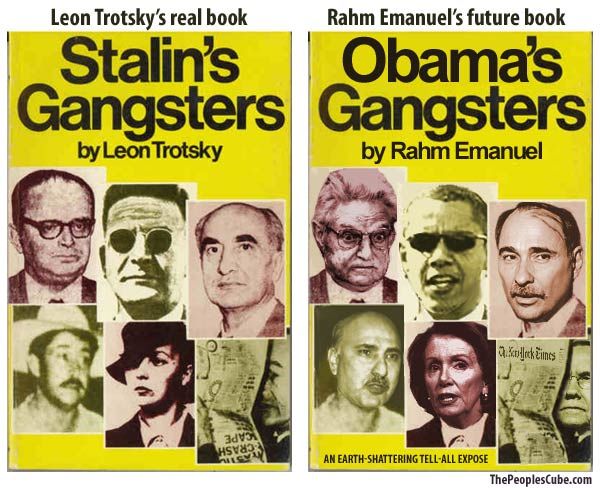