It appears that many of the 75,000 “Obama worshipers” in Portland last weekend really turned up to see a free concert by an uber-hip Portland band, the Decemberists (see photo below). Of course, the MSM didn’t report this fact because it might dampen the story of the new and wonderful miracle of the Obamessiah. 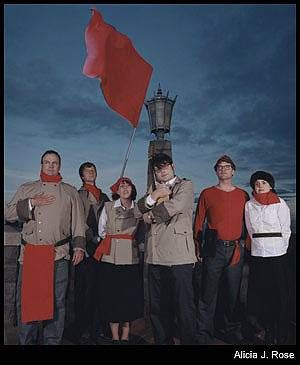 Most media reports were reminiscent of the style the Soviet poets used to glorify public appearances of the great Stalin. For example, Obama’s home paper, the Chicago Tribune, reported it this way:

They waited for hours under a warm sun, the line snaking for blocks and blocks through downtown. They packed onto the park lawn, from the makeshift stage to the waterfront and up to the street. They watched from a bridge overhead and from pleasure boats on the river, bikini-clad. They brought their parents and their infants. Some skipped work. Some wilted in the heat. A few jammed the streets afterward, hoping for a final motorcade glimpse. Fire department officials counted 75,000 in all, a record for the main attraction, Sen. Barack Obama (D-Ill.).

Not a word about the popular Obama-supporting band — which is a shame, because it’s the most interesting development in this whole episode.

Not only do the band members love Obama’s message, but they also write lyrics that sound as if Michelle Obama wrote them — except, of course, for the lyrics of the most musically competent piece in the entire set, the Soviet anthem. Those lyrics were written by Sergei Mikhalkov, Stalin’s most trusted poet.

That’s right: incredible as it sounds, the band blasts the Russian-language national anthem of the USSR at the beginning of every concert. And not the sanitized Putin version either — the old-guard Communist version that glorifies the Party of Lenin. Do I remember those lyrics well! As a former Soviet citizen, I have quite an emotional connection to this music: the Soviet-era one-channel radios used to play it at six every morning as a nationwide wakeup call, causing me hours of lost sleep. I tried to escape this dark memory by coming to America, but the American “progressives” just won’t let me forget.

What puzzles me is this: what connection can the Soviet national anthem possibly have with today’s young Americans who get so ecstatic every time they hear Obama’s promise of “change”? And what exactly is meant by “change”? Perhaps the words of the anthem will hold the answer:

In the victory of Communism’s deathless ideal,
We see the future of our dear land.
And to her fluttering scarlet banner,
Selflessly true we always shall stand!

I would love to see a video of Obama as he listened to this. Did he stand at attention? Did he put his hand on his heart? Or did the band can the anthem for the time being, just like Obama canned his longtime “mentor and spiritual advisor” for political expediency? “Yes we can,” people.

Few things are more absurd than a “rebellious” American rock band playing the anthem of a political power that outlawed rock music and persecuted the musicians who were the true romantic rebels.

The band’s name apparently comes from the Decembrists, a group Russian aristocrats who staged an unsuccessful uprising in 1825 to dispose of the czar and establish a constitutional democracy. Some of them were executed; others were jailed or exiled to Siberia.

Had their uprising been successful, Russia might have taken the same route towards freedom as America. With no ground to stand on, Communists would have been just another marginal group — an object of ridicule, similar to the Daily Kos moonbats of today. Lenin would have used his law degree to become a pesky ACLU-type trial lawyer. Stalin would probably have gone on robbing banks up until the day he’d gotten shot in a botched stickup, after which Hollywood would have bought rights to his life story. Or he might just have become a college professor, like Bill Ayers — Leftist radicals are all idealistic sweethearts as long as they don’t have power over other people’s lives.

Speaking of Bill Ayers, this friend of Obama and former terrorist is now making a good living as a soft-spoken professor of education, writing books advising teachers on how to indoctrinate kids in the Marxist view of reality and instill the spirit of class struggle in the American classroom. I wonder what his rank would be in the American Politburo if his group had overthrown our elected government.

Ayers and Stalin have at least this much in common — they both started their careers by setting off bombs in public squares. In 1907, Stalin organized an armed robbery of a coach full of money in the main square of Tiflis. Forty people were killed and a further 50 wounded during the ambush, which netted about US$3.4 million for the Bolsheviks. The money was sent to Lenin in Finland, and then moved to Geneva, to finance propaganda and other subversive activities. Impressed by the result, Lenin was reported to have said that Stalin was “exactly the sort of person I need.”

Let’s listen to more of the song played by the band that gathered 75,000 for Obama in Portland:

Through tempests the sunrays of freedom have cheered us,
Along the new path where great Lenin did lead.
To a righteous cause he raised up the peoples,
Inspired them to labor and valorous deed.

“Valorous,” indeed. In the secondhand worldview of the confused Oregonian revolutionaries, facts get replaced by grotesque, radical myths. Like many American students reading Orwell’s 1984, they probably imagined that this book was written in support of a radical leftist ideology (the result of Bill Ayers-style education). I have met young people who believed that Big Brother was some evil conservative and a capitalist oppressor — not the spitting image of Joseph Stalin, whom I recognized as soon as I started reading it (of course, the first Russian translation of the book wasn’t made until the 1990s, after the fall of Communism).

On their pretentious website, the Decemberists point to Vladimir Nabokov as one among the “people and things we enjoy.” I’m sure Nabokov would be horrified. He spent his life in exile, running away from Communist fanatics who were destroying the classical Russian culture he represented.

While the Soviet anthem is indeed a powerful piece of music, it is but a small fragment of the once-powerful musical culture of Russia — a culture that languished under the heavy boot of Communism, along with all other forms of art. The few survivors lived not because of the regime’s “assistance,” but, rather, in spite of it.

Those who do not learn from history are doomed to repeat it, and one learns nothing if history has been tampered with. And “nothing” is exactly the amount of knowledge this young generation of Americans has about the history of Socialist movements. As a result, thousands gather to cheer a Leftist candidate for the American Presidency, lured by a band of semi-literate dunces who start every performance by reiterating that the Party of Lenin is taking them to the triumph of Communism.

No wonder Obama’s voters aren’t disappointed by the reports of his radical connections. Bill Ayers blew up federal buildings? That is so cool! Jeremiah Wright hates America? That’s definitely a plus! You can now add the Decemberists to the list. They, like, play the Soviet anthem, man!

As I look at the picture of the Obama-supporting band amidst a wild mix of Communist clichés, I can’t help but remember our tongue-in-cheek Communists For Kerry during the legendary 2004 election: 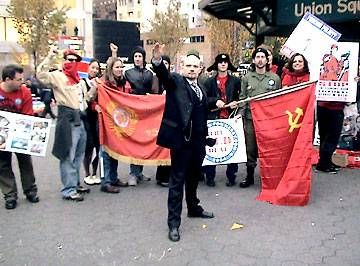 Will there be Communists for Obama in 2008? It seems that there already are 75,000 in Oregon. Oh well. There will always be the People’s Cube.

Oleg Atbashian, a writer and graphic artist from Ukraine, currently lives in New York. He is the creator of ThePeoplesCube.com, a satirical website where he writes under the name of Red Square.