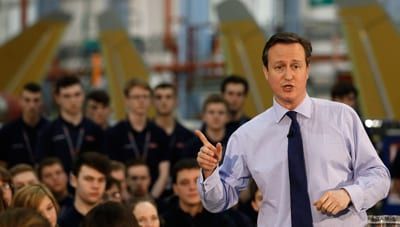 While presidential debates are a fixture of the American political scene, and the idea of a candidate refusing to take part in them is pretty much unthinkable, televised encounters between party leaders in the UK are a novelty. The first debate only took place in Britain in 2010, and their future is already uncertain. Negotiations over proposed debates in the run-up to the May 7th general election have descended into a row between politicians, and between the governing Conservative party and the media.

David Cameron is refusing to take part in a head-to-head debate with Labour opposition leader Ed Miliband, prompting Miliband to call Cameron a “chicken” who’s “running scared of the British people.” Broadcasters have threatened to press ahead with that debate, and with two more that would also include the leaders of other parties, and to “empty chair” Cameron if he doesn’t participate. The row follows months of wrangling between broadcasters and party strategists over the timing and format of the debates.

Cameron has always maintained he won’t take part in any debates during the period of the official election campaign, which will commence when Parliament is dissolved on March 30, claiming they would be a sideshow that would distract from “real” campaigning. He has agreed to take part in one debate before then, with Miliband, Liberal Democrat leader Nick Clegg, UKIP leader Nigel Farage and the leaders of the Green Party and Scottish and Welsh nationalists.

While Cameron isn’t “running scared” – the Conservatives are slightly ahead of or tied with Labour in most polls, and can point to falling unemployment and one of the world’s fastest-growing economies – he’s certainly open to charges of hypocrisy. As opposition leader in 2010 he threw down the debate gauntlet to Labour Prime Minister Gordon Brown, and mocked Brown mercilessly for his initial reluctance to take part.

But Cameron isn’t stupid, and he believes he has little to gain by debating Miliband, and much to lose. While Britain’s economy has recovered under the Conservative-Lib Dem coalition, the Tories remain vulnerable to the kind of emotive, substance-free attacks on their austerity policies, and on issues such as healthcare, in which Miliband specializes, and for which a TV debate would provide the ideal forum.

Cameron also has a point about the debates being a distraction. In 2010 they produced a great deal of heat but very little light — although they did move the polls in favor of the Lib Dems, Britain’s proverbial protest party, after Clegg took advantage of his relative obscurity to portray himself as the pragmatic outsider who would put an end to the Conservative-Labour duopoly.

Miliband, meanwhile, has nothing to lose and everything to gain. He polls well behind Cameron for favorability and leadership qualities, and is desperate for the sort of game-changing moment a good debate performance might deliver. He claims, unconvincingly, that the debates “belong to the British people,” and that because debates were held 2010 an inviolable precedent has somehow been set. Labour have even concocted a new human right to bolster their case – the “right” of the electorate to watch party leaders slugging it out on TV – while Miliband, who rarely misses an opportunity to overplay his hand, has said a future Labour government would enshrine leaders debates in UK law, leading pundits to wonder if uncooperative party leaders could be hauled off to prison.

Miliband argues that there should be a head-to-head debate between him and Cameron because they’re the only two leaders who could head the next government, but that’s not strictly true. If, as in 2010, the Conservatives emerge from the election as the largest party but without an overall majority, Cameron could be forced to stand down as leader and if his replacement (the current favorite is London Mayor Boris Johnson) negotiated with smaller parties to form a coalition government he would become prime minister, without the electorate having seen him articulate his beliefs or defend his party’s policies on a debate stage. The same thing could happen with Labour and Miliband.

So there’s no irrefutable case for TV debates becoming a permanent feature of general election campaigns, and despite the protestations of Labour and the broadcasters there’s no obligation for any party leader to take part in them. The argument that “America has them so Britain should have them too” doesn’t wash either: debates may work for presidential politics but they’re not as well suited to the British system, particularly given the proliferation of smaller parties clamoring to be included, and the consequent increased likelihood of the country being governed by coalitions.

But Cameron and the Tories are in the minority, with the broadcasters and most of the press just as keen as Labour and the other opposition parties for the debates to happen. For all the media’s grandstanding about exposing the party leaders to public scrutiny, their motivations are entirely selfish: the debates will boost ratings, generate website clicks and newspaper sales, and give media folk the chance to do what they enjoy most – talk about, and among, themselves.

The BBC is especially keen on the debates happening. Notwithstanding the self-interest it has in common with the other TV networks, the corporation will do everything it can get away with to help elect a Labour government that, in addition to implementing a radical left-wing agenda, would ensure the BBC’s privileged, taxpayer-funded position was protected. And you don’t have to look far to find a blatant conflict of interest – the BBC executive who’s leading debate negotiations on behalf of the broadcasters is married to a former Labour spin doctor.

One option the broadcasters are considering is a Q&A with Miliband and a studio audience, but this could breach broadcasting regulations on impartiality if a similar platform isn’t offered to Cameron. Clegg, deputy prime minister in the coalition government, has offered to stand in for Cameron in a head-to-head with Miliband – he’s even more desperate than Miliband for a “game-changer,” with his party languishing below UKIP in the polls and only marginally ahead of the certifiably insane Greens – but Miliband doesn’t want to be attacked from his left for an hour or more on live TV, and a debate without Cameron won’t draw the viewing figures the broadcasters want.

Cameron appears to have judged the public mood well. The Conservatives have increased their lead in a couple of polls taken since the row erupted, suggesting that, while plenty of Britons will watch debates if they’re held, they’re not inclined to punish a party leader who doesn’t take part. Whether his risky strategy will benefit the Conservatives come May 7, and whether or not the very idea of televised UK election debates will survive the current furor, remains to be seen.