If you live, work, or play in New York City, be prepared to have your unhealthy eating habits thrown in your face when you go out for a meal. Last Friday, the New York City law requiring fast-food and casual dining chains to post the caloric content of food on the menus went into full drive. While the law was official in May, as of July 18 health inspectors can now fine restaurants between $200 and $2,000 for not complying with the law. The city now joins San Francisco and Kings County, Seattle as the only two areas in the United States with such legislation, and the California Restaurant Association is trying to get the law overturned.

This isn’t like Burger King hanging a nutrition count poster on the wall. This law requires that the calorie count of every food on the menu be written in the same font and format as the food and price, right on the menu or menu board. This also goes for tagged items. A priced cupcake in a display case will now require its calories to be posted as well. What is this city, and this world, coming to? I feel almost bad for a muffin or piece of cake that has to sit in a window announcing how fat it is. Won’t someone think of the poor, victimized cupcakes? 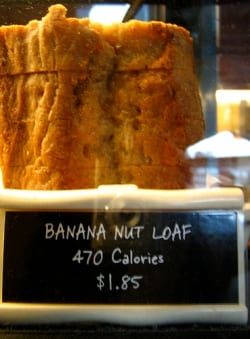 In some ways, I can understand why some people feel the need for such a law. For instance, many people choose salads thinking they are a healthy choice when in reality the dressings and added condiments make them often full of fat and carbs. But let’s face it, people who eat at the places this law is made for — Subway, McDonald’s, Dunkin’ Donuts, TGI Friday’s — have to know that their favorite dining establishment isn’t serving up the healthiest of menu items. When you go out for food, whether it’s a quick muffin at a coffee shop or an entrée at Friday’s, there is a complicit knowledge that you may not be eating food that is good for you . Unless you are going to a place that caters to the health conscious, chances are if you are eating in a fast food or chain restaurant, you’re not looking to be a dietetic angel. Is anyone really surprised that a muffin is loaded down with calories? Well, yes. But there’s a certain willful ignorance involved in getting your meal from Dunkin’ Donuts if you think it’s going to be a healthy choice.

Yes, there are unhealthy people. There are fat people. There are people who will eat a 900 calorie chicken meal four times a week even though they are 200 lbs overweight and destined for a heart attack. Should it really be the government’s job to babysit them, though? And should we all have to suffer because the government is afraid some of us can’t take care of ourselves?

I don’t know about you, but when I go out to eat, the last thing I want to see when I look at my menu is how many calories I’ll be consuming during my meal. Sure, some people may be weight watchers, but that doesn’t mean we all have to be. If I want to be fat and unhealthy, it should be up to me to make that choice without a thinly veiled berating from the government. It’s not like the nutritional content of your restaurant meal can’t be found before you make your choice; most restaurants that this law is aimed at have this information readily available, be it on a poster, in a pamphlet, or online. It’s quite easy to do your research before you eat. Besides, if you are trying to maintain a healthy diet, heading to Subway for a meal may not be the wisest choice, despite what Jared tells you.

Another thing to think about: If Bloomberg and company are so concerned about the calories the citizens of New York are consuming in a day, why stop there? Why are singly owned restaurants exempt? Why are hot dog vendors exempt? Isn’t the muffin at Mom and Pop’s Café as bogged down with calories as the one at Starbucks? Some articles are citing financial hardship as the reason the singly owned eateries aren’t covered in this law. It is expensive to send items to labs for calorie testing. It seems then that this law is unfair in that it is pointing its greedy finger at only the restaurants that can afford to comply. A very selective way of regulating our calorie intake.

I suppose I don’t really care for this role simply because I have a fear of slippery slopes. First they came for my trans fats. Then they came for my calories. I’m afraid that one day they’ll come for me; I’ll swipe my discount card at the grocery store and next thing you know, Big Food Brother is at my door citing me for a low fruit to junk food ratio.

Why should we invent laws to practically shame people into their personal lifestyle choices? It should not be left up to the government to make rules preventing me from being buried in a piano case, if that’s how I choose to live. Unlike smoking in a bar, devouring a cheesesteak and fries won’t hurt anyone but myself.

C.S. Lewis said it best: “Of all tyrannies a tyranny sincerely exercised for the good of its victim may be the most oppressive. It may be better to live under robber barons than under omnipotent moral busybodies. The robber baron’s cruelty may sometimes sleep, his cupidity may at some point be satiated, but those who torment us for our own good will torment us without end for they do so with the approval of their own conscience.”