When I arrived in the Tampa airport on Saturday afternoon, I recognized an RNC delegate on my flight from Atlanta.  She was sporting an Uncle Sam hat, but other than that and the signs welcoming RNC delegates and announcements about a Dixieland band playing in the airport, the atmosphere was not welcoming to Republicans.

The Democratic National Committee’s truck with the anti-Romney billboard was making a loop around the airport.  I caught sight of it as I waited for my shuttle to my friend’s house. (I was instructed to not stand on the “dirty sidewalk” but wait in the “nice waiting area”—“we pay for it” by a very efficient woman with a New York accent selling me my ticket.) 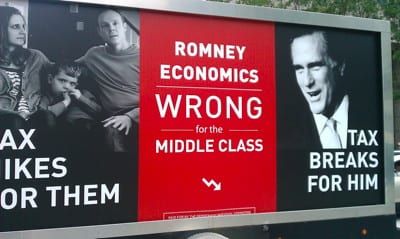 My van arrived within the promised 20 minutes, and we loaded up to capacity.

Our driver, in a Boston accent, asked the crew if a new group of four were delegates.

“Yeah, we’re delegates,” said the burly guy named “Butch” sitting right behind me. They could have been. The four of them were talking about getting to a barbecue that evening. It was not a vegan barbecue, so it sounded Republican to me. They talked in general terms about organizing, meeting up. One of the four was a sixty-ish woman, not one of those aging flower children but with hair done, makeup on.

After we had let on a couple more passengers and settled in, I asked the man if he had seen the anti-Romney roving billboard. He said yes and informed me that he was a delegate for the “99%.” He showed me the front of his t-shirt that had an image of Romney as Darth Vader.

Butch was a rigger, a machinery mover, he said, and he spoke with the inflections and grammar that reminded me of my working-class neighborhood in Rochester, New York, when people there still could get jobs at Kodak and General Motors. The younger fellow next to him joined in on the conversation. The biggest guy who sat next to the driver did not say much. All were sent by Pennsylvania Working Families, a front group for ACORN.

Butch and his friend had said earlier, “We’ve got a reporter here,” when they saw me with my pen and pad. “Who do you write for?” they asked. I told them I was a freelancer and that one of the publications I wrote for was PJ Media. Had never heard of it, they said.

Butch, in spite of his manual labor job, seemed to have had enough time to learn a lot of talking points and seemed to know about various bills, like the Bring Jobs Home Act (failure due to Republicans in his estimation).  “What about the first two years when Democrats controlled both houses?” I asked.

Working families is neither Democrat nor Republican, they told me. Both parties are controlled by the “banksters.” This is where the guy in the Ron Paul t-shirt agreed. He came to report for an entertainment newspaper in Columbus, Georgia, where he works as a bartender. To their friendly invitations of “we need to work together,” he responded agreeably.

“So, would you wear an Obama Darth Vader shirt?” I ask Butch. No, because the Democrats are closer to their goals in terms of the number one issue: jobs and the economy. Really? I ask. With the unemployment rates we have?

Obama stopped the hemorrhaging: the unemployment rate went from 15% to 8%.

“Will you be going to the Democratic Convention?” I ask. Maybe. Possibly. As if they hadn’t considered it.

To let the (Republican) delegates know that “the narrative needs to change.”

Being an English professor, I am interested in “narratives.”  What do you mean by that, I ask in my nicest teacher’s voice.

Their narrative was that things really started going downhill after President Reagan’s election. Outsourcing needed to stop. People needed to pay their “fair share.” I asked if they thought the stimulus worked. Yes, it stopped the “hemorrhaging.” How about Solyndra? Oh, you mean the program Bush started?  They laugh.

I ask about the 1%, whether they think Obama is in the 1%. They’re not sure. Maybe as far as money goes, but his “beliefs” are with the 99%. Same thing for Warren Buffett. He may be the second richest man in the world, but in terms of beliefs he is with the 99%. His ideas about heavy taxation and making the richest pay their “fair share” are very good.

“Well, why doesn’t Warren Buffett just give his money away?” I ask. There is nothing stopping him. He could alleviate some of the inequality.

The fellows indicate that that wouldn’t do much good.

“Hey,” says the younger, smaller guy, “I don’t care if he’s rich. I’d like to be rich. It’s the beliefs that matter. Tax policies need to be fair.”

Well, they are here for the 99%. Indeed, the Working Families Party has been instrumental in organizing the Occupy Wall Street demonstrations.

We pass a group of about eight young Tampa police officers in their light-tan summer uniforms walking down the sidewalk. “Brown shirts,” says Butch. The really big guy in the front just looks over and says nothing.

When we get to where they’re staying, the Hilton Garden Inn, Butch asks me to consider what he had told me.  I had only asked questions; he had ready explanation. He extends his hand to shake in a friendly manner.

I smile and shake hands, thinking of some of my friends in high school from Rochester whose biggest aspiration was to work for Kodak or General Motors.

I look on the Pennsylvania Working Families website and see that these guys probably enjoyed a nice send-off the previous night, with a “procession of cars with dog crates strapped to the top.” (I had seen my first “Dogs against Romney” t-shirt the previous night at a contra dance.)

But I wonder if these are the “delegates” who are going to be going to all the strip clubs that are being promoted by the media and whose billboards adorn about 99% of the taxi cabs waiting around.

As we drive down to the town where I’m staying with my friend I continue to talk to the Ron Paul guy, who should not have been put on this bus (despite the super efficiency with which the shuttle lady had told me the bus gets passengers to destinations). We have time because the GPS system can’t distinguish between “street” and “avenue.” He is friendly and nice.  He loves bartending. He’s going to be covering the Ron Paul rally on Sunday.

We talk about the four from the Working Families contingent. He agrees with them on a lot of points. “But I don’t know about the fair share on taxes bit,” he says. Yes, I tell him; long ago I too lived on tips. Among the relative advantages and disadvantages the bartending lifestyle has to offer is the fact that the IRS can’t really keep a close eye on the cash flow.

I think about that…and the nice barbecue the four people from the Working Families contingent are going to be enjoying.