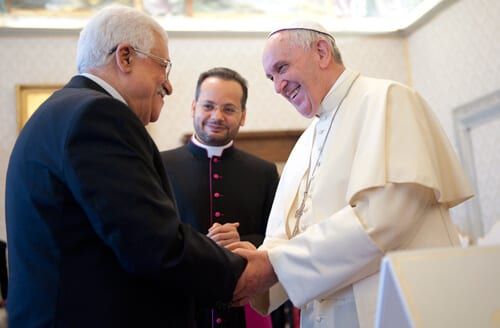 Pope Francis meets Palestinian president Mahmud Abbas during an audience in the private library at the Vatican on May 16, 2015. Three days before the Holy See announced that it was preparing to sign its first treaty with “Palestine,” two years after officially recognizing it as a state. The meeting comes a day before the pope is due to canonize two Palestinian nuns, who will become the first Palestinian Arabs to gain sainthood. (Photo by Sipa via AP Images)

Trust in the Lord with all your heart,
And lean not on your own understanding;
In all your ways acknowledge Him,
And He shall direct your paths.

It is famously said the great 13th century philosopher Thomas Aquinas baptized Aristotle by reexamining faith’s relationship to reason; likewise it’s fair to say the “Liberation Theologists” ordained, elevated, beatified, and finally deified Karl Marx by asserting (Roman Catholic) Christianity can only be understood by interpreting faith through the suffering of the poor, their struggle, and their hopes.  First described in A Theology of Liberation by Peruvian Priest Gustavo Gutiérrez, liberation theology’s message that truth, justice — and thus the true vision of the Catholic Church — can only be seen through the eyes of the poor was immediately understood by the Left as a break in the Church’s historic sense of right and wrong, good and evil.  It was also a perfect vehicle for persuading the increasingly secular western elites, bored with the burdens of traditional faith, that voting for a particular party was tantamount to praying; it even took care of the obligation to “aid the poor,” and freed them of “all that mumbo-jumbo superstition of which we smart young moderns have no need.” The doctrine spread quickly throughout Latin America and its open door to cafeteria religiosity quickly found friends in Asia, Africa — and, of course, Arab Palestine, where moral relativism is a constitutional necessity.

Curiously, it almost immediately received a bear hug embrace from mainline Protestant denominations in the World Council of Churches who gobbled it up in an attempt to stanch the emptying of their pews, a problem evangelical Christians, who remained true to their basic tenets, hadn’t encountered and so were immune to the message.  The Roman Catholic Church responded with furious denunciations from several major voices in the hierarchy — including Pope John Paul II and Benedict XVI when still Cardinal Ratzinger.  But if there was any doubt that in spite of their efforts liberation theology now reigns triumphant in the Roman Catholic Church, Pope Francis’ recent behavior should disabuse you of any such hope.  After spending much of the last six months properly decrying the vicious and mindless murder of Christians throughout the Middle East, or for the more fortunate amongst them, their expulsion, he moves on to a gala welcome of the thuggish Raul Castro. This is followed by the more shocking announcement that the Vatican will recognize a “Palestinian State.”

Why is that more shocking that the reception given Castro?  Because the victims that fill Castro’s graveyards are political enemies of the state, heroes who dared to speak out against the Castro brothers’ sinful and murderous regime.  The logical inference is that no matter how repugnant docility might seem (in the abstract) to we who are blessed with freedom, in the real world the tyrant offers only that pragmatic, albeit distasteful, choice as a refuge.  But no such option exists in the Palestinian “State” whose “national” television service broadcasts around-the-clock insistence that Jews are the children of pigs and Satan and that murdering them and washing one’s hands in their blood is not merely an obligation but an honor; and a television service where the Sesame Street images used to teach the alphabet in most countries is employed to brainwash toddlers into promising to murder Jews.  Docility is no defense.  Your capital crime is committed at your birth, the same moment your sentence is decreed.

How can the Vatican recognize such a society without first demanding that the instruments of its national expression (i.e., radio and television) cease their campaign for the genocide of Christianity’s elder cousins (as previous pontiffs have described the Jewish people)?  Or are Jewish lives unworthy of the same pleas for respect that were only recently broadcast to the world by the pope himself?  This is liberation theology at its purest:  interpretation of the Holy Scriptures to protect only your favored group and to the exclusion of those of whom you might not approve.  It is, of course, the religious equivalent of Alinskyism, the spiritual uterus of our own “Progressive” movement that declares anything or anyone at odds with leftist views as morally deformed and unworthy of caring about. Progressivism, Alinskyism, Communism, Nazism, liberation theology, all goose-stepping to the same leftist drumbeat.

Relativism also allows the totalitarian perversion of language foreseen by Orwell: add to “War is Peace,” “Freedom is Slavery,” “Love is Hate,” Pope Francis’ declaration “Mahmoud Abbas (leader of the PLA) is an Angel of Peace.” No mind that he invited the terrorist murderers Hamas to be his marriage partners in government, no matter that he helps fund the slaughter of innocent Israeli children — oh, wait — no, I expect not even children are innocent if they’re Jewish children.  Not in the language of liberation theology.  Or the current pope.  Or so it seems.

The Left is both parasite and vulture, spreading its disease by either insinuating itself in the body of others’ works and achievements and hollowing them out, or by feasting on dragons slain by those braver than they could ever be.  It lingers at the edge of battle, watching while others build and create, waiting patiently for the moment those heroes rest for a moment’s breath.  And then it swoops back to steal the food won by the hard effort of others and either enslaves them for their efforts, as in Russia (Soviet or Putinesque) and Cuba, or simply murdering them, man, woman, child, and infant, as in Nazi Germany and the contemporary extremist Islamic world.

One by one, the great institutions that gave meaning to Western civilization have fallen to their infection.  Our schools teach their false history, our universities enforce their fascist speech codes, our media coddle their thuggish political hacks, our military is seconded to serve their social rather than our national security agenda, courts are enjoined to consider “just outcomes” rather than due process,” and now even the elected president of the United States questions the logic of the First Amendment, the guarantee of free speech.

Can they possibly have now also captured the Church of Rome?  We will soon find out; Pope Francis vows his agreement to recognize the Palestinian State will be rich with guarantees of religious freedom.  Perhaps.  But if those guarantees are only for Christians and do not address the evil of Palestinian propaganda and its calls for the genocide of the Jewish people, his promise will be exposed as empty and dishonest for all to witness.  Including God, who surely sees what is being done in his name.