Add Yemen to the Growing List of Fragmented Mid-East States 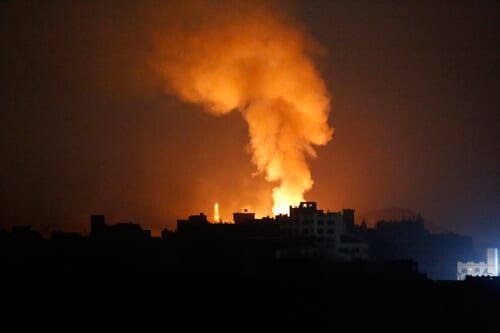 Fire and smoke rises after a Saudi-led airstrike on Sanaa, Yemen, Tuesday, April 28, 2015. Yemen’s exiled government on Monday declared three areas in the country engulfed in fighting between Shiite rebels, their allies and pro-government forces as “disaster” zones, including the southern port city of Aden, and said that the last month of violence has claimed 1,000 civilian lives. (AP Photo/Hani Mohammed)

It is now very clear that the Saudi announcement on April 21st of the conclusion of Operation “Decisive Storm” in Yemen was a declaration devoid of all content.  The fighting in Yemen is continuing.

The geopolitical significance of events in this poorest of Arab countries is meanwhile increasing.

Yemen is the most visible venue for the Saudi-led Sunni Arab mobilization against Iranian attempts to advance across the region.  Events in the country are showcasing both the extent of this mobilization and the limitations inherent in it.  Yemen is also highlighting the contradictory and problematic nature of U.S. regional policy at the present time.

What has precipitated the current events?  It is important to understand that the Iran-supported Ansar Allah (Houthi) rebels were engaged in a gradual expansion of their power for some years prior to their seizure of Sana’a last September.

It was the Iranian element which, in addition to the Houthis’ own patience and determination, enabled them to emerge as the dominant force in Yemen.

Taking advantage of the chaos engendered by popular unrest against President Ali Abdullah Saleh, the Houthis seized Hajjah Hajjah governorate in northern Yemen in November, 2011. Amid the excitement of the “Arab Spring,” this development was little noticed at the time.

Control of Hajjah, however, gave the Houthis access to the port of Midi, and therefore to the sea.  In the intervening years, Ansar Allah received regular shipments of weaponry from Iran, enabling it to build up the arsenal necessary for its attacks in mid 2015.

According to the Sharq al Awsat newspaper, the transfer of arms was only possible because of the strange relationship that developed between the Houthis and the deposed dictator Ali Abdullah Saleh.  (Saleh is a member of the same Zaidi Shia sect to which the Houthis profess allegiance).  Saleh’s loyalists in the security forces, according to Sharq al Awsat, enabled the quiet transfer of weapons to Teheran’s clients.

Iran in the intervening period also trained Houthi fighters in Eritrea.  So when the Houthi coup against President Abd Rabbo Mansour al-Hadi began in August, 2014, it was after a long period of preparation and assistance.

The Houthis are now in firm control of the capital and are pressing southwards.  The Saudi air action which commenced on March 25th was intended to stop the march of the Shia rebels southwards to the Gulf of Aden and the strategically vital Bab el Mandeb Strait.

The trouble is that as the Saudis have re-discovered, air power by itself is not enough.  And as elsewhere in the region (Syria, Iraq, Lebanon), when it comes to proxy ground forces of the type that engage in the current wars in the Middle East, the Iranians have a clear advantage over their Sunni foes.

This means that the Saudis are now faced with a dilemma.  The Houthis and their Iranian backers are already in Aden City and the bombing has not deterred them.  Saudi Arabia must now decide just how it is going to respond.

As of now, the direction appears to be to try to build up a proxy force based on Sunni tribes within Yemen.  At the same time, Saudi special forces are engaged in Aden City, and the National Guard (the best element in Riyadh’s  conventional forces) are gathering on the border at Najran.

It remains to be seen if this will prove sufficient to halt the Houthis, though it may.  It will almost certainly not be sufficient to roll back the clients of Iran and retake the capital.

What this therefore means is that another Arab country has fragmented, with sectarian forces fighting over the ruins, and with Iran and Saudi Arabia backing opposing sides.

This pattern is becoming rather monotonous in the Middle East.  It already applies in Iraq, Syria, Yemen, Lebanon and the Palestinian territories.  Yemen may now be added to the list.

The events in Yemen also cast a harsh light on U.S. regional policy – and the contradiction that lies at its heart.  Obama’s regional policy is a minimalist one, involving the protection of perceived vital interests while letting the regional actors fight it out further in.

Vis a vis Yemen, the current U.S. position appears to be willingness to engage in naval activity to prevent Iranian control of the Bab el-Mandeb Strait (through which 4 million barrels of oil pass daily, including 3.3 million bound for western ports) while ignoring the implications of events further north in Yemen itself  — including in the ports which the Houthis control.

The problem with this approach is that Iranian control of most of Yemen, as with Iranian control of most of Lebanon, Iraq, Syria, Lebanon and Gaza, will be used for the pursuing of a regional policy intended to result in Iranian hegemony, at the expense of traditional allies of the west.   These traditional allies will move to resist the Iranian advance, as is now taking place.  So if stability is the stated goal, it cannot be achieved by a hands-off approach.

Since U.S. policy is unlikely to change (and neither Iran nor its rivals are strong enough to achieve outright victory), what will happen is that regime collapse, state fragmentation, sectarian warfare, Iranian-Saudi rivalry and Sunni-Shia conflict will continue to define the Middle East.  From this point of view,  Yemen can be seen as the latest zone to encapsulate this reality. As such zones increase and proliferate, so stability across a large swathe of the Arabic-speaking world is set to remain a distant aspiration.

Jonathan Spyer is a senior research fellow at the Global Research in International Affairs (GLORIA) Center, and a fellow at the Middle East Forum. He is the author of The Transforming Fire: The Rise of the Israel-Islamist Conflict (Continuum, 2011).
Read more by Jonathan Spyer