Should the West Abandon the Middle East? 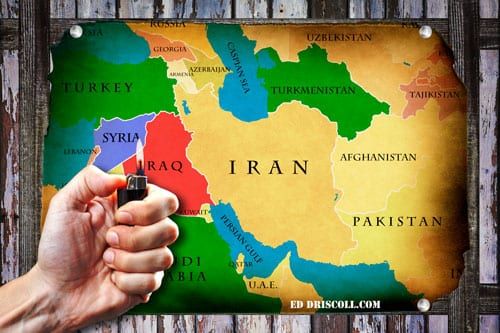 How are things in Kobani?

The battle for the Syrian Kurdish city of Kobani just entered its fourth month. It is now a fight for a heap of ruins. Four months of intense ground combat, involving tanks, mortars and RPGs as well as small arms, has reduced the city to rubble.

Nevertheless, Kobani matters. It is where the Syrian Kurds showed that with the right support, local fighters are capable of turning back the forces of the Islamic State.

Kobani also matters because as a result of the stand of the Kurdish YPG organization in the city, a potential reliable ally of the west in northern Syria has been identified. In the fight between rival successor entities over the ruins of Syria and Iraq, this is a relationship which deserves to be nurtured and developed.

I visited Kobani before the IS assault of the autumn. In May of last year, the enclave was under siege from four directions – the jihadis from south, east and west, and the Turkish authorities from the north. The Turks had a strange and ambiguous relationship with the ISIS jihadis. Sometimes the border gates would be opened to let them exit and enter. Wounded jihadis were treated in hospitals in Ceylanpinar across the border, with no questions asked.

Still, the Kurds were holding out. The positions near Tal Abyad to the east, and Jarabulus to the west, were well defended. In a place called Haj Ismail, I observed as the YPG responded swiftly and efficiently to the first signs of an ISIS attack.

Within the enclave, life was close to normal. There wasn’t a great deal of food. But the schools were operating, the hospitals were open. The Kurdish enclave had become a place of refuge for Syrian Arabs, too, seeking to flee the chaos of the fighting further west in Aleppo.

But the uneasy half-cold siege ended in September. The Islamic State, flush with new weaponry from the garrison in faraway Mosul, descended on the peaceful enclave. Their intention was to destroy it, so as to clear the way for their forces to move more easily between Raqqa province and Aleppo and Idleb.

They nearly succeeded. Despite the dogged defense of the YPG, the villages surrounding Kobani city began to fall. The civilian population was evacuated across the border. The YPG fighters prepared for a last stand within the city. What reversed the situation was the commencement of U.S. and coalition air attacks on the IS positions after October 6th. The air campaign evened out the YPG’s inferior weaponry, and the Kurds began to claw back control of the city.

Earlier this week, I spoke to Perwer Mohammed Ali, one of the Kurdish activists with whom I had worked back in March. Arrested by the Turks on leaving Kobani, Perwer made his way back to the enclave. I asked him about the current situation in the city.

“Right now its calm,” he told me. “The YPG control about 80% of the city. Daesh is still holding two neighborhoods – Kaniya Kurdan and Mikteleh. A couple of days ago, they tried to launch a counter attack. They had a tank with them, but they didn’t succeed.”

And are the coalition airstrikes helping?

“The coalition is good but we’d like them to target the tanks. IS has a bunch of them in Mikteleh.”

The liberation of Kobani seems near. The real task, says Perwer, will come afterwards. “Kobani is destroyed,” he told me, “so the big problem will be after the liberation.”

The liberation, nevertheless, seems imminent. When it comes, it will be testimony to the potency of U.S. air power, of course, but it will also be the result of the courage and determination of the fighters of the YPG.

The Middle East is the most dysfunctional political space on the planet. As has been amply demonstrated in recent days, ideas emanating from it and the bloody actions they inspire represent one of the most potent dangers to free societies anywhere.

The west cannot ignore the Middle East without abandoning it to anti-western forces. Engaging with the region, supporting allies, facing down dangers are all essential.

In the darkest days before the commencement of coalition bombing in Kobani, I sat in London with two leaders of the Kurdish PYD, the party that controls the Kurdish cantons in Syria. “Our situation,” they told me at that time, “is desperate.” The absence of even RPGs to deal with the IS armor seemed to presage doom.

Belatedly, Kobani was saved. The joint action of the U.S. Air Force and the YPG fighters who protected the town ought to be the start of a political relationship between the west and the Syrian Kurds. Dialogue with the PYD has begun. It should lead to a recognition of Kurdish national rights in both Syria and Iraq. In the ruins of these fragmented countries, there aren’t many reliable friends. There are some. The Kurds — in Syria as in Iraq — are chief among them. Their courage and their moderation deserve to be recognized and this recognition needs to be reflected in policy.

Jonathan Spyer is a senior research fellow at the Global Research in International Affairs (GLORIA) Center, and a fellow at the Middle East Forum. He is the author of The Transforming Fire: The Rise of the Israel-Islamist Conflict (Continuum, 2011).
Read more by Jonathan Spyer