Democracy or Jew-Hatred? The Libyan Edition

The virtual entirety of the western media and all western governments appear to be united in their condemnation of Libyan leader Muammar al-Gaddafi and their open or tacit support of the forces seeking to topple his regime. It should be noted that this “opposition to Gaddafi,” as it is typically described in the media accounts, is clearly not now a non-violent opposition — whether it ever was one — but has taken the form rather of an armed rebellion.

Little attention, however, has been paid to the nature and motives of the Libyan “opposition.” Indeed, there is even evidence of the American media editing out aspects that might trouble the simple and reassuring picture of the oppressed masses protesting against tyranny. Consider, for instance, the following AP photo, which accompanies a syndicated article from the New York Times: 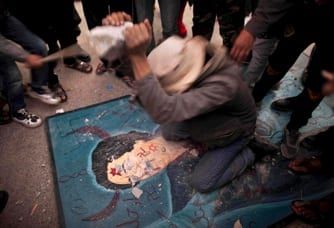 The caption reads: “A Libyan man hits a defaced billboard of leader Moammar Gadhafi with a stone during a demonstration against the regime Saturday in Tobruk, a city in eastern Libya.” Note the light red smudge on Gaddafi’s cheek below the backwards swastika. It might be a Star of David, but it is hard to tell.

Now, look at the following AP photo, which appears on Yahoo Korea (hat-tip: Clemens Heni) and which shows the same defaced image: 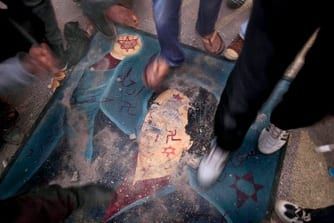 This view clearly reveals that the light red element is indeed a Star of David. Moreover, it also reveals something else: a dark red Star of David scrawled on Gaddafi’s raised fist. Whether as a result of the original framing or of cropping, the raised fist does not appear in the first photo.

Wire service photos taken at last week’s protests in the eastern Libyan city of Benghazi reveal several other examples of Stars of David drawn on portraits or caricatures of Gaddafi. For example, three of the four posters of Gaddafi shown in this collection of photos feature Stars of David. Smaller versions of the same photos, all from Reuters and dated February 23, are shown below: 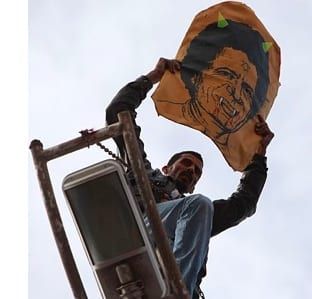 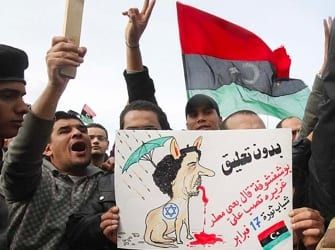 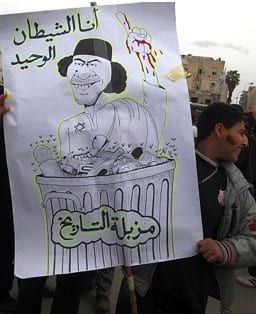 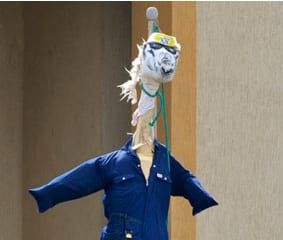 There is only very limited photographic documentation of the Libyan unrest currently available on Flickr. But the relevant Flickr archives also reveal protesters making the association “Gaddafi=Star of David.” The below detail from a Flickr photo dated February 25 apparently shows youngsters making anti-Gaddafi posters in Benghazi. The caricature at the bottom of the photo depicts Gaddafi holding forth at a podium emblazoned with the Star of David: 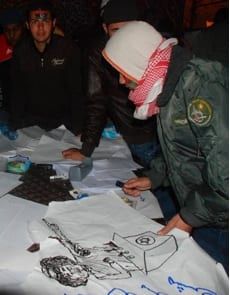 It is not clear if the below photo from Al-Arabiya was taken in Libya or at a “solidarity” rally outside Libya: 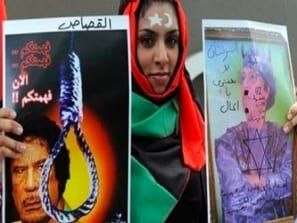 In any case, photos taken at “solidarity” rallies regularly feature portraits of Gaddafi defaced with Stars of David.

Nonetheless, when the Los Angeles Times’ “Babylon and Beyond” blog published a photo essay titled “Libya: Kadafi caricatures, parodies abound,” no Stars of David were to be seen. It is perhaps not coincidental that the post in fact contains only three photos and only two that are actually from Libya.

So, what does it all mean? The few commentators that have taken note of the Stars of David have as a rule seen them as an occasion to engage in blanket denunciations of Arab and/or Muslim anti-Semitism as such. My earlier collections of photographic materials from the Egypt protests (see here and here) provoked some similar responses. Note that for Israelis, supporters of Israel and/or Jews, such a “pox on all their houses” response is in its own strange way also reassuring. After all, it suggests — quite independently of any concrete evidence — that what is to come after the deposed Arab dictators will at least be no worse in this respect, even if it is no better.

It should be noted, however, that at least one key advisor to Gaddafi — namely, his son Saif al-Islam al-Gaddafi — has in fact been known to speak quite positively about Israel. In a 2009 interview with Germany’s ZDF public television, Saif al-Islam praised Israel as a “progressive” country whose economic success should serve as a model for Libya’s own economic development. When German interviewer Claus Kleber suggested that Israel’s economic success might merely be a function of American aide, he responded, “Okay, they have dollars. We have oil and gas. There is no excuse.” (The interview forms part of the ZDF documentary Die Bombe.)

In a 2009 op-ed in the New York Times of all places (hat-tip: Martin Kramer), Saif’s father pleaded for a “one-state solution” to the Israel-Palestinian conflict. Such a “one-state solution” would certainly seem to imply the end of Israel as a Jewish state. But the tenor of the editorial can hardly be described as anti-Semitic. Indeed, it is not even unambiguously anti-Zionist. Gaddafi not only recognizes but indeed underscores the history of the persecution of Jews. He even states, “The Jewish people want and deserve their homeland.” Perhaps Gaddafi has expressed himself differently in Arab media. The editorial is, however, consistent with similar remarks that he has made in the European press.

It is also worth noting that Gaddafi’s 2003 decision to abandon Libya’s nuclear arms program will undoubtedly have been seen as a craven act of capitulation by those Arab nationalists and/or Islamists eager to obtain an “Arab bomb” to counter the “Jewish” one.

In any case, one thing is sure: simply averting one’s gaze from the evidence does nothing to clarify its significance.