How Does a Dead-Last French Cable Channel Nab a Sit-Down With Obama?

On the eve of his whirlwind trip to the Middle East and Europe, President Barack Obama gave exclusive interviews to two European television broadcasters: Britain’s BBC and France’s iTELE.

The choice of the BBC is self-explanatory. But iTELE? Why not France Télévisions, the publicly funded French equivalent of the BBC? Or the privately owned TF1, France’s longtime market leader in prime-time news broadcasting?

iTELE is a relatively small cable news channel in a country where the traditional network giants continue to dominate. Even between the two cable news channels that are readily available, iTELE’s ratings trail well behind those of its younger rival BFM. According to the latest ratings for the télévision numérique terrestre (TNT), iTELE enjoys a whopping 0.8% audience-share. That’s dead last among the seventeen channels comprising the TNT. (Reception of the TNT, which includes the traditional networks plus a handful of additional channels, requires special equipment but no special cable or satellite subscription.)

Perhaps it has something to do with the interviewer, iTELE’s White House correspondent Laurence Haïm (that’s Laurence Haïm, not Laura Haïm, as Jeff Zeleny of the ever linguistically challenged New York Times calls her). For if French journalists in general have abandoned any pretense to objectivity while reporting on American politics in recent years — as has been extensively documented on blogs like No Pasarán or my Transatlantic Intelligencer — Laurence Haïm’s preferences are even more transparent than most.

Until nabbing her interview with President Obama this week, Ms. Haïm’s greatest claim to fame was to have burst into tears while announcing the re-election of his predecessor, George W. Bush, in 2004.

“You can, I think, see the fanaticism of these people here,” Haïm says, referring to the merrily celebrating Bush supporters behind her. “You see the screen, you see the Fox News channel, you see the American flag, you see these people. George W. Bush is going, then, to become president again for four years.” And then, after remarking on her mounting emotions, she repeats the phrase punctuated by convulsive sobs. 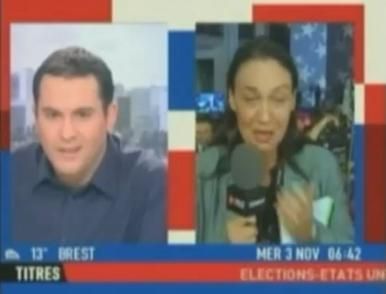 But if the prospect of four more years of George W. Bush made Laurence Häim sad in 2004, the presence of Barack Obama in the White House evidently makes her very happy now.

Ms. Haïm’s “At the White House” blog is subtitled “The Blog Made in Obama,” with the odd “Made in Obama” tag being in English. Announcing her impending departure for Saudi Arabia to follow the president on his travels, Ms. Haïm writes, “Come back … to this blog to be at the heart of what’s happening behind the scenes of the presidential trip, which starts in a few hours after 22 hours of flight guys and girls … LH.” The chirpy “guys and girls” is again in English.

Even Obama’s appointment of children’s entertainment executive Charles Rivkin to be ambassador to France — a move that would undoubtedly have been greeted with horror and disdain had it been made by Obama’s predecessor — earns an enthusiastic exclamation point on Ms. Haïm’s blog: “Former Muppets Boss Ambassador to France!”

In her iTELE interview, Ms. Haïm does ask Obama what he is expecting from France in Afghanistan (answer: nothing concrete). But on the whole, her questioning of the president is as predictably sycophantic as are the president’s responses predictably platitudinous. The interview includes scintillating exchanges such as this:

“What do you love about France, if I may ask?”

Elsewhere, on the topic of relations with the “Muslim world,” Ms. Haïm reminds the president that during the electoral campaign he had told her that he wanted to convene a “Muslim summit.” The idea will undoubtedly be of interest to the Organization of the Islamic Conference, whose 57 member states already convene every three years in an “Islamic summit.”

Ms. Haïm does, however, manage to ask at least one seemingly tough question.

“Do you speak French?”

“My French is terrible.”

This is the same remark that he made in April during his “townhall meeting” with European students in Strasbourg (in Strasbourg indeed, Obama added to his merely faulty linguistic résumé by saying that both “my French and German are terrible”). But then he adds, “I studied it in high school and I just forgot it. Now, Michelle, I think, speaks a little French.” Asked whether he would say a word in French, the president politely declined.