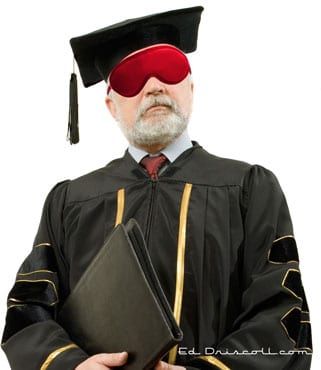 It would be difficult to find a more staunchly left-leaning profession than teaching — at both the public-school and university levels. Although individual instructors may hold conservative views, teachers as a group are firmly progressivist, committed to “social improvement” through state intervention. Solidarity with the putatively oppressed has led schools to embrace a variety of ameliorative causes, most recently, in Canada, a gay-oriented anti-bullying campaign that is at times stridently anti-Christian (though also, ironically enough, pro-Muslim) and a zealous environmentalist philosophy that teaches children to condemn oil and gas production.

Perhaps the most notable and pervasive form of teacher progressivism is egalitarianism, the commitment not only to equality of opportunity but also to equality of outcome as a social goal. This is a form of utopian thinking that radically minimizes or outright denies innate differences in human ability and intelligence, ascribing to social factors such as class privilege and “ableism” all significant variations in student performance.

According to this ideology, young people are held back from achieving their potential by factors not of their own making: by poverty, social prejudice, or pedagogical obtuseness — factors seen as ingrained and pervasive in contemporary North America. Official affirmation, cultural sensitivity, and institutional support are necessary to combat these conditions. Thus a document produced by the Ontario Ministry of Education (2009) finds it necessary to devote close to 100 pages to stressing how Ontario schools should work to reduce “bias and barriers” in the classroom so that “all students feel engaged in and empowered by what they are learning.”

Throughout this document and in North American schools at large, the overwhelming emphasis on “bias and barriers” means not only that poor performance is almost never understood to be a student’s fault and that responsibility for failure is social and systemic, but also that individual achievement, the result (as the worldview holds) of unmerited privilege, cannot in good conscience be admired or applauded — must even, in fact, be minimized. The only exception to the attitude of downplaying both achievement and failure is the case of the oppressed person who achieves success; his (or more often her) achievement can and must be celebrated, even beyond its worth. Only those deemed shackled by poverty or prejudice can be applauded.

As a result of this philosophy, schools are now dedicated not to recognizing and promoting individual merit but instead to hiding the fact of individual differences from both the achievers and from those who struggle or fail. Schools also seek to devise systems to accommodate and overcome difference in order to produce the equality they believe to have been distorted and denied. Such pedagogical practices as group projects and alternative means of evaluation (”Service learning” is the latest example, whereby students earn part of a course grade for volunteer work) are measures towards this end.

What is so striking about this widely lauded egalitarian goal is that incontrovertible evidence of its hollowness is more available to teachers than perhaps to any other group of professionals in the world. Teachers deal with the intractable human element every day in their classrooms, encountering its striking variety — the unmistakable gradations of intelligence, capacity, and character in students. All who teach must see this: the student of moderate ability who, through enthusiasm and dedication, becomes proficient in his studies and outstrips the classmate of similar ability who does not persevere; and the brilliant peer who outclasses them both, possessing an intelligence or creativity that neither of his classmates could ever hope to equal.

To explain these, and many other, combinations of human qualities through appeals to privilege or deprivation, misrecognition or bigotry, is to misrepresent reality, preferring theory to the tangibly true. It is simply the case that human beings are fundamentally different from one another both in what they are naturally capable of achieving and in what they choose to undertake, the daily decisions and habits that propel them down one path or another — to productive work, wholesome influences, and beneficial habits, or to their opposites.

This is the mystery of human personality, even perhaps of human spirit. To advocate that it be understood and managed mainly under the template of social justice is to meddle dangerously with what will always resist attempts at such control.

The therapeutic approach is not merely ineffectual in such cases but destructive. Any lie is damaging, of course: the false affirmation offered to the inadequate and the praise withheld from the excellent undermine the trustworthiness and authority of teachers and of the whole education system. But it is worse than this, for if it were merely the system being corrupted, one could watch it destroy itself in the hope of creating something better out of the ruins.

The system is not merely failing to teach and assess students fairly; it is unfitting many of them for learning. It does so by destroying those very factors that are necessary for excellence: appropriate self-perception, recognition of greatness, a healthy fear of failure, the salutary experience of disappointing oneself and others, and the satisfaction of genuine achievement, only possible when failure is real and mediocrity not falsely elevated.

In attempting to protect the disadvantaged, the system hobbles all and creates apathy and resentment in both the falsely praised and the truly capable, who are often left to their own devices. Egalitarianism thus depletes the fund of human excellence necessary for cultural flourishing.

How, with contrary evidence before their eyes, can teachers hold to their egalitarianism? It may be that their thinking is a kind of secular faith believed even in the face of an undermining reality. Philosopher Roger Scruton, in The Uses of Pessimism (2010), sees the utopian belief in human perfectibility as a kind of mental illness: an adaptive mechanism developed over centuries and designed to confer hopefulness and purpose in difficult times. What was once perhaps a necessary illusion, however, has outlived its usefulness, becoming one of the most destructive pathologies of our time. It is also, unfortunately, deeply entrenched in our schools and universities.