When Will MSM Admit Its Role in Advancing the Racialist ‘Hands Up, Don’t Shoot’ Lie? 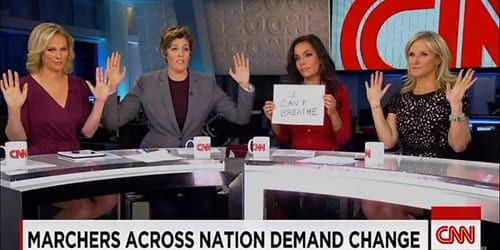 If I hadn’t been afraid of alarming the neighbors, I would have screamed out the window.

Last Thursday evening’s broadcast of CNN Tonight (transcript is here) featured a discussion of recent events in the world of criminal justice, specifically the long-awaited release of two reports from the U.S. Department of Justice, the first addressing the specifics of the Michael Brown shooting, the second dealing with the general state of affairs in the Ferguson Police Department.  I looked forward to watching, as one of the announced guests was my friend, police officer-turned criminology professor David Klinger.  Perhaps, I told myself, Mr. Klinger will be allowed to shed some much needed light on the Brown shooting for the benefit of those at CNN — and at most other media outlets — who clung to the belief that Brown had his hands up and was trying to surrender when he was shot down in cold blood by a trigger-happy, racist cop.  The DOJ report made absolutely clear, after all, that the “hands up, don’t shoot” scenario relentlessly peddled in the media was a myth, and given all that has followed, an especially harmful one.

Whatever hope I had at the outset that this hour of television watching would be time well spent was dashed within seconds.  The program’s anchor, Don Lemon, opened with an announcement of the “breaking news” that the body of a black man had been found hanging from a tree in Port Gibson, Mississippi.  A horrific crime, the viewer was led to believe, but what were the details?

The details would have to wait until we were informed of the outrage over the arrest of Martese Johnson, a student at the University of Virginia who was roughly handled by officers of that state’s Department of Alcoholic Beverage Control.  The later stages of the incident were captured on cell phone video, which showed an agitated and bloodied Johnson face down on the sidewalk while the officers struggled to handcuff him.

“You could draw a line,” said Lemon, “from Martese Johnson to Eric Garner to Mike Brown, unarmed black men in violent confrontations with police.”  You could draw such a line, I thought, but it wouldn’t be a straight one or indeed one that made any sense at all except as an instructional device to demonstrate to the naive or willfully blind that the three named individuals suffered unjustly at the hands of the police.  But then Lemon said, “But how that — how we know that [sic] ‘hands up, don’t shoot’ was not the truth.  Now that we know that, where does all of this leave us right now?”

Where indeed?  The revelation that the Justice Department had validated the conclusion of the Clayton County grand jury, i.e., that Darren Wilson committed no crime when he shot and killed Michael Brown, would not be allowed to distract us from tales of abusive cops and bigoted Southerners hanging black men from trees.  And to that end, Lemon spoke with CNN reporter Evan Perez, who speculated on what might have happened to Otis Byrd, a 54-year-old black man who had been missing since early this month.  And speculation was all he offered, for he had no details other than the fact that Byrd had been found dead hanging from bed sheets in a tree near his home.

To his credit, Lemon allowed that Byrd may not have been murdered.  “But we don’t know, it could be a suicide,” he said to Perez, “they just don’t know at this point, correct?”

What they also didn’t know, or perhaps were unwilling to report, was that Byrd had been paroled in 2006 after serving time for a 1980 murder (he killed a woman during a robbery), and that he was last seen alive at a casino 30 miles from his home.  The evidence pointed toward suicide, but the suicide of a convicted murderer wouldn’t go far in furthering the narrative of black victimhood, so CNN served up the story more for its potential for incitement than its actual newsworthiness.  (And nothing that has emerged since the broadcast has indicated Byrd’s death was anything but a suicide.)

And the same could be said for the other top story on the program, the arrest of Martese Johnson.  The video causing so much consternation is here (coarse language), but absent more information, it is more inflammatory than instructive.  Johnson can be seen bleeding from a wound on his head, but whatever caused the wound happened before the video starts.  None of the three officers present punches or kicks him or does anything to him other than try to get him in handcuffs, which he resists with some vigor while calling them “f***ing racists.”  A bystander can be heard saying that the officers merely wanted to check Johnson’s identification after they saw him refused entry at one of the bars near campus.  Maybe the officers were out of line, but there is nothing in the video that comes close to proving it.

And yet, judging from Johnson’s ubiquity in the media since his arrest, he will be the next civil rights hero in the pantheon whose latest inductees are Michael Brown and Eric Garner, though fortunately for Johnson, he didn’t have to suffer the inconvenience of dying to achieve this status.

So, if CNN intended this hour of television to be a re-examination of its own role and that of the media at large in the propagation of the “hands up, don’t shoot” myth, they allowed it to be sidetracked by two stories that fed this very myth.  Just as bad, the show featured more panelists than one could keep track of, none of whom, including David Klinger, was given enough time to expound on his point of view without being interrupted.  The takeaway, which had to be CNN’s intent, was that while Darren Wilson may have been exonerated by the Justice Department, he’s probably guilty anyway, because look at the cesspool of racism that employed him.