Can Brady Campaign’s New President Save Them?

In a recent USA Today interview, Gross said “he wants to start a national conversation on gun control and get people engaged in a deep way.”

But we’ve been having this “conversation” for decades. In 1993, President Clinton signed the Brady Campaign’s signature legislation — the Brady Handgun Violence Prevention Act — into law, mandating federal background checks on firearm sales by licensed dealers. Jim and Sarah Brady began lobbying for this law in 1986.

Brady advertises the bill as the reason why violent crime declined. However, violent crime and murder rates began declining in 1991, two years earlier.

But that’s only the beginning. Gross’ next advertising:

Policy is a big part of the solution but people have to realize that this isn’t a political issue, this is an issue that’s claiming the lives of 30,000 people every year and eight kids every day and we need to approach it with that kind of urgency.

But gun control is a political issue. In the current Congress, Republicans’ average NRA grade is “A” while Democrats average “D.” Of the 106 Brady endorsees in 2010, 104 were Democrats. Democrats are the party of gun control.

To advertise gun control successfully, an emotional hook is vital. The best way is to misrepresent fatality data to create the illusion that America’s awash in a violent crime wave due to firearms access. For Brady’s purposes, higher body count is vital.

The most common anti-rights advertising includes the “30,000 firearm deaths a year” and “8 kids a day” messages. These misleading fatality numbers include legal intervention (justifiable homicides due to shooting criminals committing felonies), suicides, and accidents.

Including suicides in overall “gun death” numbers makes for more dramatic copy, but a recent United Nations study shows there’s no correlation between firearms ownership and suicide; though the U.S. has the highest firearms ownership in the world, its suicide rank is 41st out of 86 countries.

UNICEF cited 1994 Canadian research that “linked suicide among young people to sexual and emotional abuse, stress, unplanned pregnancy, problems concerning sexual preference, unemployment, imprisonment, and running away from home.” This report preceded major gun control efforts in Canada, Australia, and the United Kingdom. In spite of the then-greater prevalence of firearms, they’re not a suicide “link.”

The emotional “8 kids every day” message is designed to “get people engaged in a deep way” to support gun control. Sensible people advocate child safety. But to reach “8 kids a day” Gross includes young adults up to age 19.

What’s a “child,” of which “kid” is a synonym? Oxford English Dictionary (OED) defines the word “childhood” as: “The state or stage of life as a child…the time from birth to puberty.” OED defines “puberty” as: “The period during which adolescents reach sexual maturity and become capable of reproduction, distinguished by the appearance of secondary sexual characteristics.” There seems to be general agreement that these conditions occur by the age of 15, defining children as age 0-14.

The table below shows that 12.6% of all firearms fatalities and homicides for ages 0-19 occur in Gross’ “kids” category, less than one child per day.

In 2009, “an estimated 1,770 children died due to abuse or neglect,” nearly 5 children daily. Gross’ Center to Prevent Youth Violence (CPYV), which he co-founded in 1998, offers no programs addressing this more serious cause of child homicide.

The table below shows that firearms fatalities have decreased dramatically since 1991, with child safety leading the way even though their rates were already less than one-tenth the non-child rate in 1991. But it also explains the “five kids a day” dying from abuse: Children’s firearms homicide rates declined faster than their non-firearms rate because it’s easier for an adult to kill a small child by any means.

In all categories but one — non-child homicide — firearms fatality rates declined faster than non-firearms rates. Non-firearms suicide rates increased, corroborating UN research noted above: Intent is key, because firearms ownership increased during this time period. As one example of the disconnect between gun ownership and firearms fatality rates, the graph that follows shows that as firearms ownership increased, child firearms homicides declined. 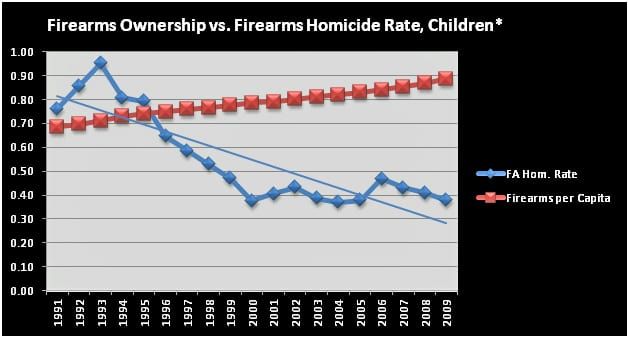 The CDC study included all sanctuary cities “defying a federal law…to assist the federal government with their illegal immigrants.” For example, Los Angeles is home to MS-13 (Mara Salvatrucha). The FBI says MS-13 is composed of “mostly Salvadoran nationals or first generation Salvadoran-Americans, but also Hondurans, Guatemalans, Mexicans, and other Central and South American immigrants.”

MS-13 “operates in at least 42 states and the District of Columbia,” and engages in “exceedingly violent” crimes including murder, rape, robbery, home invasions, and kidnapping. Overall, the FBI notes:

Gangs are responsible for an average of 48 percent of violent crime in most jurisdictions and up to 90 percent in several others.

The CDC reports the highest firearms homicide rates occur at ages 18 to 23. The graph below shows the percent of gang-related homicides by age, collated from FBI Supplemental Homicide Reports (SHR) for years 2000-2009. Ages 18 and 19 contain the highest percentages of all gang homicides, with age 17 fourth-highest. 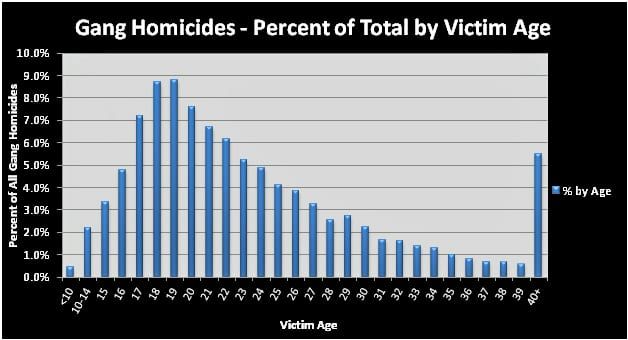 Corroborating the CDC research, gangs used firearms to commit 92.9% of their murders, compared to 66.3% for all SHR homicides. Between 2000 and 2009, the U.S. homicide rate declined 9.4%, while gang homicides garnered a 19.0% larger percentage of all murders.

None of Gross’ CPYV programs or resources address gang issues.

By selecting Daniel Gross as their new president, the Brady Campaign represents: