Bernie Sanders Doth Protest Too Much

Vermont Senator Bernie Sanders wasted no time using the Tucson shooting to financially benefit his 2012 reelection campaign. From his email:

In terms of this savage shooting rampage, several points need to be made.  First, this horrendous act of violence is not some kind of strange aberration for this area where, it appears, threats and acts of violence are part of the political climate. Nobody can honestly express surprise that such a tragedy finally occurred.

Sanders continued by implying that Republicans and their business interests are set to benefit significantly in the 2012 elections:

The right-wing Republicans now leading their party are extremely confident that the political momentum is with them. They not only won decisive victories in the last election but, as a result of the disastrous Citizens United  Supreme Court decision, they correctly believe that they will have a huge financial advantage in future elections because billionaires and corporate interests can now contribute as much as they like into the political process without disclosure. …

Yes, of course they will continue their usual day-to-day efforts to give tax breaks to billionaires and cut back on programs desperately needed by the middle-class, but now they are prepared to go much further. [emphasis added]

Oxford English Dictionary defines “corporation” as “a large industrial company.” “Company” is defined as “a legal association formed to carry on some commercial or industrial undertaking.” Such undertakings are known as “business,” which OED defines as “commercial transactions or engagements; total bookings, receipts, etc.” Or “a commercial house, a firm.” The bottom line? Profit.

Some history is in order.

The Emergency Economic Stabilization Act of 2008 was intended to “immediately provide authority and facilities that the Secretary of the Treasury can use to restore liquidity and stability to the financial system of the United States.” It authorized the Troubled Assets Relief Program (TARP) to spend about $750 billion of our tax dollars on banks and other financial institutions, shoring up the economy and mortgage industry.

To his credit, Sanders voted Nay, along with 15 Republicans and 10 Democrats. Nevertheless, Democrats were instrumental in passing this legislation.

The financial and real estate industries responded by giving 51.6% of their 2008 campaign contributions to Democrats, the first time Democrats received over 50% since 1994. These industries include corporations like Citigroup and Southwest Louisiana Land LLC.

For the 2008 election cycle, all business sectors gave Democrats a record 54.7% of total campaign contributions. Since 1996, business has been finding more friends in the Democratic Party, increasing contributions from a record low of 40.4% to 51.2% in 2010. The Democrats became the party of Big Business in their own right. 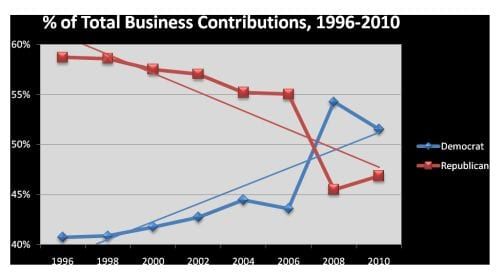 Some of the financial institutions receiving TARP money awarded their wealthy officers “billions in bonuses,” including individual “million-dollar bonuses.” For example, “JPMorgan paid out bonuses in excess of $3m to more than 200 employees.” Since the TARP money was tax dollars, this qualifies as Sanders’ “tax breaks” for very wealthy people.

Recently, Reuters reported: “Banks seized more than a million U.S. homes in one year for the first time last year.”

Ex-Speaker Nancy Pelosi received 65.6% of her campaign contributions ($1.6M) from business in 2008, including $120,500 from the insurance industry (4.9% of total). Pelosi called insurers “immoral” and “villains,” accusing them of “unethical behavior” during the ObamaCare debate.

President Obama received over $2.3M from the insurance industry during his 2008 campaign, the second-highest after McCain’s $2.4M. Obama campaigned for his health care reform by implying that insurance companies were the reason we needed it.

The rhetoric doesn’t appear to match reality. Wellpoint CEO Angela Braly runs the “largest U.S. commercial health insurer by membership.” Braly is on record supporting “guaranteed coverage for everyone.” In an interview of Braly, the Wall Street Journal reported that “the insurance industry was a cheerleader for the [Democrats’] plan.”

The health care drama appears to be profitable for Democrats. The 2008 and 2010 election cycles brought record campaign revenues from the insurance industry: Democrats received about 45% ($37.3M) of all insurance contributions these two cycles, higher than their historical cut of 37%.

This plays out like some nightmarish melding of Kabuki and Shakespeare where all the actors’ entrance speeches lose their hypnotic influence after the fancy masks are removed. Then, the protestations of innocence begin.

Sanders calls himself an Independent, but caucuses with the Democrats. Passing this legislation was good for his party’s business.

Between 2003 and 2008, Sanders received over $2 million in campaign contributions, 20.7% coming from retired individuals. Open Secrets notes: “The top industry isn’t really an ‘industry’ at all, but individuals who list their occupation as ‘retired’ in federal documents.” Open Secrets also notes that the AARP, with over 40 million members, “is the largest advocacy group for retired people.” AARP is in the business of protecting certain government programs which financially benefit their members:

AARP’s top concerns are maintaining the integrity of Social Security and improving Medicare and other health care for seniors. The association was a major, high-profile supporter of Obama and congressional Democrats’ plan for health care reform, which passed in early 2010.

Another 15.6% came from Democratic/liberal special interests. As noted above, Democrats derived financial benefit from spending our tax dollars on the financial industry.

Depending upon how you categorize Sanders’ contributions, between 49.3% and 85.5% were related to somebody’s financial bottom line.

Curiously, Sanders attacks “right-wing” extremists for misleading America, but doesn’t apply his criteria to left-wing extremists cashing in on manufactured crises which benefit their corporate donors.

When Sanders complains about “billionaires and corporate interests,” he really needs to look in the mirror.