While most of the nation was commemorating the fallen of 9/11 with sadness and resolve to understand the ongoing threat of Islamic extremism, arguably the nation’s foremost institution of higher learning approached the tenth anniversary from a very different perspective.

At Harvard, the theme was — you guessed it — “Islamophobia.” From Harvard’s introductory declaration for its “campus-wide panel”:

Today marks the anniversary of the horrific attacks of September 11th, 2001. As Americans reflect and mourn the loss of nearly 3000 people, Muslim Americans not only share their grief, but also express their own challenges amidst stereotyping, discrimination, racial profiling and hate crimes.

Harvard’s Center for Middle Eastern Studies, the event’s producer, declined to invite a single representative from any victims’ groups. There were no speakers from the September 11th Families Association, 9/11 Families for a Safe and Strong America, Uniformed Firefighters of Greater New York, or Tuesday’s Children (a support group for those who lost relatives on that day).

Thanks in great measure to Prince Alwaleed Bin Talal’s Islamic Studies Program, there were — in abundance — plenty of academics obviously recruited to remind students of their take on the real tragedy surrounding 9/11: the racism, bigotry, and, of course, Islamophobia inherent in American society.

It was the deep-pocketed prince whose $10 million “donation” to the Twin Towers Fund was summarily refused by then Mayor Rudolph Giuliani. Having been rebuffed, the prince quickly dropped $20 million into the laps of Harvard and Georgetown shortly thereafter — no refusals there.

And what a bounty those riyals have yielded. The prince knew precisely where to monetize Saudi influence at the two most prestigious academic factories supplying the State Department. At Harvard’s Center for Middle Eastern Studies, the prince’s suggestion that the United States “re-examine its policies in the Middle East and adopt a more balanced stance toward the Palestinians” has produced results. For a decade, Harvard has presented a wildly skewed lineup of jihadist apologists and anti-Israel academics, from discredited charlatans like Ilan Pappe to spokesmen like Mustafa Abu Sway — who likes to remind us that “terror is the weapon of the weak.”

The session’s components were designed not to commemorate the dead and to discover the role played by al-Qaeda and its jihadist antecedents, but to examine the ingrained bigotry of non-Muslim white Americans. The CMES sought to reduce the murders to a PC lesson plan for high school teachers:

What role do you think Muslim artists and authors might play in dispelling stereotypes about Islam?

In keeping with banishing the victims to the shadows, educational gobbledygook reigned supreme, again highlighting the nastiness of America and its fundamental bias against Muslims:

How do the notions of uniforms and the flags inform our idea of identity? Of “other?”

Is there/who is the implied “other” in both of these images?

Other PowerPoint slides revealed a distinct absence of attention to human suffering, focusing more on the mechanics of destruction:

The Facade Falls: The latticework facing of the south tower came tumbling to earth upon impact of the hijacked plane.

Were the authors cleverly trying to insinuate their views of America’s “facade” of tolerance?

Overseeing the apologist gala was Professor Jocelyne Cesari, the French Algerian-born political scientist, recently of — where else? — Columbia University, and director of Harvard’s “Islam in the West” and “Islamopedia” programs. Among other brilliant observations, Professor Cesari has dubbed the misogynistic, Jew-hating, homophobic (to the point of extermination) Sheikh Yusuf al Qaradawi “not a radical.”

Other faculty advisers included Duncan Kennedy, Carter professor of General Jurisprudence at Harvard Law School, whose attention for many years has been focused less on general jurisprudence and more on the delegitimization of Israel. Following Operation Cast Lead in 2008, Kennedy convened a discussion/tribunal declaring Israel guilty of violating basic tenets of international humanitarian law. They barely mentioned Hamas.

The historical reality of the theory and practice of jihad was not a welcome concept at this event. The word was virtually unutterable. In a brief glossary, however — apparently provided by another happy recipient of Prince bin Talal’s largesse, John Esposito of Georgetown’s Center for Muslim-Christian Understanding — jihad is described this way:

Jihad may refer to a defensive military action undertaken to protect a Muslim community from an armed aggressor, generally understood to be non-Muslim.

Aggressive jihad, it would seem, does not exist and has never existed. Were the 19 terrorists performing a “defensive military action” on 9/11?

After all, it was Harvard’s 2002 commencement speaker, Zayed Yasin, who signaled what has become the standard operating definition of jihad for academia: “Inner Struggle.” Similar bowdlerized definitions of sacralized, aggressive Islamic doctrines were conveniently supplied to students:

Wahhabism: Muhammad ibn Abdal-Wahhab believed that literalist readings of the Qur’an and the hadith should constitute the sole basis of Islamic thought.

Kafir: Beyond the most basic definition of a kafir as somebody who rejects God, there has been little historical consensus within Islamic societies, past and present, as to what actually makes a person a kafir.

Gradually, the focus of the pedagogy shifted to “tragedy-as-art.” The centerpiece became the bizarre work of Art (Maus) Spiegelman and his 2004 comic book, In the Shadow of No Towers. Obviously, Spiegelman was chosen for his core message: Bush and Cheney and what they represent are the real culprits of 9/11. In one illustrated frame, bin Laden joins in mutual villainy with the former president, captioned: “Equally terrorized by al-Qaeda and his own government.” 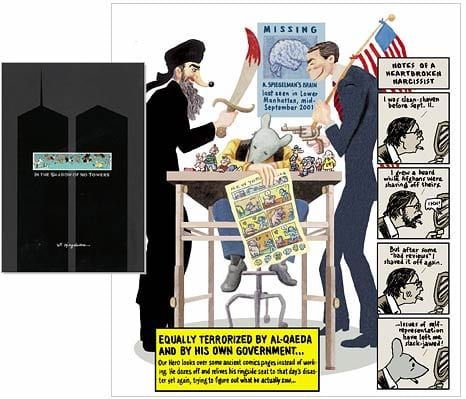 Curiously, the event described Spiegelman as a “primary source.” Absent from any presentation were writings or speeches by bin Laden, Zawahiri, or Khaled Sheikh Mohammed. They must not have qualified as “primary sources.”

Another “primary source” omitted from the CMES presentation was the last will and testament of Mohammed Atta, the ringleader of the attack, whose traditional Islamic burial instructions included this gem:

I don’t want a pregnant woman or a person who is not clean to come and say good bye to me because I don’t approve it.

That one might have been a bit problematic for the feminists in the audience.

There was even a whiff of “trutherism” about the event. One of the slides slipped this in:

September 11th as History and Imagery: How Do We Determine Truth and Reality?

Harvard is certainly not alone in operating as a wholly owned subsidiary of Islamist thinking; virtually every Middle East Studies department at American universities does the same. Considering the indoctrinations they supply to impressionable students, it is no surprise that even an event so solemn as a 9/11 anniversary would not stray far from their apologetics.

Hillel Stavis is a writer based in Cambridge, MA. He focuses on investigative reporting on Harvard University and the Boston higher education community.
Read more by Hillel Stavis
SHOW COMMENTS