In a dramatic development that could shake the political leadership of  the Justice Department, career lawyer Christopher Coates has sent a letter to the U.S. Commission on Civil Rights offering to testify Friday on matters related to the controversial New Black Panthers voter-intimidation case. Click here or on the screen capture below to read Coates’ letter in PDF form: 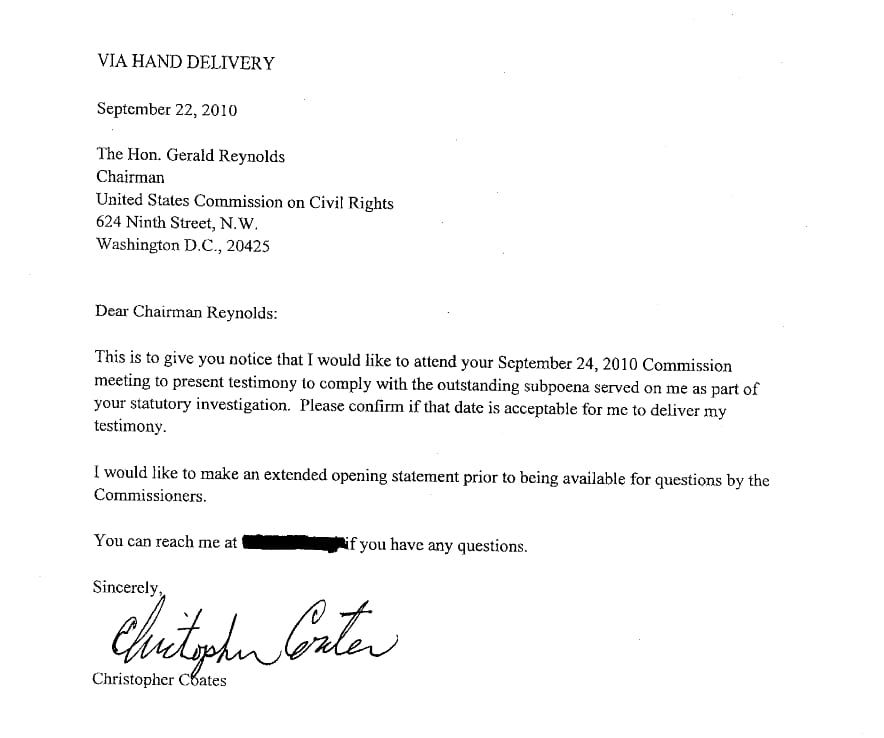 Ten months ago, Coates, the award-winning former chief of the Voting Section of the Civil Rights Division, was subpoenaed by the Commission to testify about the case. He was subsequently instructed by DOJ officials to ignore the subpoena. Within the past hour, commissioners were informed that Chairman Gerald Reynolds had spoken with Coates and that the chairman would reconvene the Commission’s ongoing hearing on Friday at 9:30 a.m. to hear Coates’s testimony.

The Civil Rights Commission has sought to obtain Coates’ testimony on Justice’s dismissal of the New Black Panther Party voter intimidation case in Philadelphia. In a recent request to Justice, the Commission agreed to limit initial questioning of Coates to accusations made by former career lawyer J. Christian Adams about statements and other actions by Julie Fernandes, an Obama administration political appointee, if DOJ produced Coates.

Adams testified that Fernandes, a deputy assistant attorney general in the Civil Rights Division in charge of voting matters, told Voting Section leadership that the Obama administration would not file election-related cases against minority defendants — no matter the alleged violation of law.

Adams also testified that Fernandes said Justice would not enforce the provisions of Section 8 of the National Voter Registration Act (NVRA). Section 8 requires states to clean up voter registration lists on a regular basis by removing the names of ineligible voters who have died or moved away.

On Election Day 2008, two uniformed members of the New Black Panther Party — one wielding a club — were caught on video as they appeared to harass voters outside a Philadelphia polling place. The Voting Rights Section filed a civil lawsuit that the defendants did not answer, placing them in default.

However, the Justice Department dismissed virtually the entire case despite the objections of career attorneys.

Watch PJM for more on this remarkable news as it develops.

Hans A. von Spakovsky is a Senior Legal Fellow at The Heritage Foundation. Along with John Fund, he is the coauthor of “Who’s Counting? How Fraudsters and Bureaucrats Put Your Vote at Risk” (Encounter 2012) and “Obama’s Enforcer: Eric Holder’s Justice Department” (HarperCollins/Broadside 2014).