Many 9/11 family members feel Americans have forgotten how it felt — seeing the Towers fall, the Pentagon burning, the United Flight 93 wreckage. Following are interviews with some family members, each one representing a cross-section of the American experience, each with a heartbreaking story.

Susan Rescorla’s husband, Rick, died a true hero. He was an army colonel who fought in three wars. After retiring, he became the security chief for Morgan Stanley at their offices in the World Trade Center. After surviving the 1993 World Trade Center attack, Rick implemented a mandatory drill — every employee, including senior executives, regularly practiced his emergency evacuations. After the first plane hit Tower 1, Rescorla — following his evacuation plans and ignoring building officials’ advice to stay put — evacuated Morgan Stanley’s 2,700 employees from Tower 2. He died during the tower’s collapse, as he had returned to the building to rescue others. His remains were never found. Susan Rescorla, choking back tears, commented:

I am writing a book about Rick and my journey together. My husband and I were soul mates. It is so raw with me, even today. I get so emotional I have to swallow my tears. I am so proud of him.

I am not much better than I was nine years ago, except back then I wished I had died as well. I am still trying to understand all of this. What happened should be felt by every American. One way of doing this is to bring these numbered WTC steel pieces to every state in the union. These steel pieces are treated like a casket, wrapped in the American flag. They are significant because people can touch it, feel it, and it brings forth the spirit of the dead.

Joe Holland’s 32-year-old son, Joe Holland III, was not supposed to be in the World Trade Center. He was called to attend a meeting on the 102nd floor of Tower 1. Because of a traffic jam, the meeting started late, and he was there when the planes hit. He was alive until the tower collapsed, but was trapped because the conference room doors jammed.

Among those he left behind was his ten-day-old son, who never would know his father. Says Holland:

My son was murdered. I want Americans to understand that. The pain never goes away. As this day approaches it gets worse and worse.

Americans lived it on 9/11 and maybe a few years after, but I have to live without my son day in and day out. I had to do something to focus, so I built a memorial for the 2,983 victims of September 11. I want to make sure we never forget.

I have iron from WTC, tile from the Pentagon, sacred soil from Shanksville, Pennsylvania, and also a five-inch shell from the USS Cole which will be included in the site.

Maureen and Al Santora’s son, Christopher, had found his dream job — New York City firefighter. He graduated in June 2001, and was assigned to Engine Company 54. All fifteen men in this firehouse died trying to rescue others from the World Trade Center.

Although his body was found three days after September 11, it was incorrectly identified as someone else. It was not until November that Maureen and her husband Al were notified of the mistake:

I was one of the lucky ones, in that I have my son’s body. There are still 997 people who never had ID. I have needed the time to adjust to the fact my son was murdered. We keep thinking each year will be better, but even nine years later it is so very difficult. We still have not healed. I come to tears when thinking about my son, which is constant.

Beverly and Tom Burnett’s son, Tom Jr., died on United Flight 93. Among those left behind were his young children, ages five and three. Tom’s wife alerted him about the other planes, and when he saw that his plane had been diverted from its original destination of Los Angeles and was headed towards Washington, D.C., he and a group of others decided to take action.

Beverly Burnett commented that, after hearing the black box recordings, she knew the group had been able to enter the cockpit. She thinks they would have been able to overpower the terrorists if they had a few more minutes. The Burnetts stated:

It’s been nine years for us. We were extremely close to our son, and miss him every day.

Where we live we are in the plane flight pattern. Every time we hear a plane fly over, we think of Tom.

Beverly had moments where she wanted to stay in bed and just pull the covers up. What gives them solace is that their son fought back. They want Americans to know:

Tom took action and got involved. To honor Tom, we want people to get involved. We established a citizenship program in his name where 8th graders have service days to help the community. 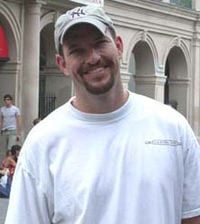 He had decided to fly home early to get ready to attend his good friend’s wedding. After determining that the plane was going to be used as a weapon, Mark joined the group that stormed the cockpit. It crashed into in a field in Stonycreek Township, near Shanksville, in Somerset County, Pennsylvania. Says Alice:

Mark died fighting. He died on his feet. 9/11 is a remembrance of a deep loss for me. I also want people to know that my son was a gay man. I want other gay people to be proud of who they are, despite their sexual orientation that might not be well-received. He was one of a small group of men that tried to stop the terrorists.

Because he had such fond memories about his days at the University of California, Berkeley, a scholarship fund was established to help one student pay for tuition.

Shirley and Bob Hemenway’s son, Robert, was awarded the Purple Heart. In March 2000, he was assigned to the Pentagon as chief of Naval Operations.

The Hemenways were told that the area where their son died reached 3000 degrees after the plane had hit. His body was never found. He left behind two young children. Say the Hemenways:

We get through this emotional period by talking about our son. We want everyone to know about him, how he died, and why he died. For our son and everyone else that died on September 11, Americans should fly the flag on that day to honor those who died.

All those interviewed were in complete agreement on what they want Americans to understand: their loved ones were murdered out of a hatred for our way of life. But they dearly love America, and the war on terror is a war of survival. They don’t want their loved ones to have died in vain. Says Alice Hoagland:

I am afraid Americans have lost focus. I just hope it does not take another brutal bloodletting to get us back on the mark to realize we have to be vigilant against terrorism.