Democrats have raised to a new level the triumph of campaign over governance. The White House has explicitly embraced this notion with its “Summer of Recovery” campaign to sell the public on the idea that the stimulus — which was promised to keep unemployment under 8 percent, costs $213,000 per job “saved or created” using the administration’s own numbers, and which the Europeans are now repudiating — was good policy.

This should be interesting, because the evidence doesn’t support a passing grade. The chart below shows actual GDP during 2009.  It also shows what would have happened if the trajectory at the start of 2009 had continued the entire year (labeled “Continued Decline”) — that is, the graphical version of “the economy was falling off a cliff.” The shaded area is the difference – the additional GDP from not continuing to decline — and totals $268 billion. 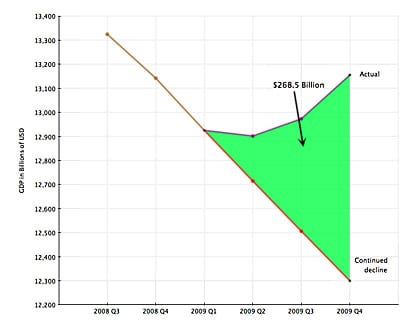 Stimulus spending so far has been roughly $260 billion. Thus, if one attributes all improvement in GDP to the stimulus — no role for the Fed, no role for mortgage relief programs, no role for worldwide economic improvement — then it essentially broke even and provided no multiplier effects.

The stimulus was bad policy. Instead of governing more effectively, the Obama administration has started a campaign to distract from the facts.

The same strategy prevails in the White House response to the Gulf oil disaster; a naked political strategy to distract from a clear policy failure.  There are four clear policy issues. First, the damaged well must be capped. This is BP’s responsibility. They have the ownership and the expertise.

Second, the spread of oil must be contained and mitigated, and the damage remediated. Even though BP has financial liability, mobilizing and deploying the resources is and has been a federal responsibility. It is pure politics for the Obama administration to co-mingle the cleanup with capping the damaged well. The failure of the Interior Department in this regard is solely the Democrats’ responsibility. The president spent a year preparing an offshore drilling policy without any reform or resources devoted to the task. Where has been congressional oversight since 2006 when Democrats took control of Congress? Instead of investigating the reports of a failed regulatory effort, Congress held its first hearing after the disaster for the sole purpose of finger-pointing.

The administration has the responsibility to harness global oil expertise. The large global resources — experience, specialized ships, and equipment — to deal with the disaster were barred from helping out by the Jones Act — a law barring foreign-flagged ships from coastal shipping that is a tribute to the power of the unions. The administration should have quickly waived the Jones Act. In addition, private sector resources — especially entrepreneurial talent — should be leveraged to make the federal cleanup effort more effective.

These failures are proof that despite campaigning on a platform criticizing the Katrina response, the Obama administration learned nothing from its similar problems and efforts. Instead of governing effectively, it has returned to campaigning.

Most recently, congressional Democrats have made explicit the triumph of campaigns over governing. For the first time since the Budget Act of 1974 created the congressional budget process, the House of Representatives will not even vote on a budget.  That’s right. The president has put out a proposal that has trillion dollar deficits over the next decade and puts the U.S. on track to have its debt downgraded. The Democrats’ response: we don’t need a budget!

Instead, they are interested in electoral success no matter the consequences for taxpayers. Spending and debt are considered among the top two issues in the midterm elections. The Democrat leadership does not want its members voting on budgets that show trillions of dollars of deficits. But instead of preparing a budget that does not take the federal government down a dangerous track, the imperatives of campaigning trump effective governance.

The idea that the campaign does not end with election is not new. But the lengths to which campaign imperatives are damaging governance have reached new lows.

Douglas Holtz-Eakin was the director of the Congressional Budget Office (2003–05). He also was chief economist in the President’s Council of Economic Advisers under President George W. Bush (2001–02) and senior staff economist in President George H. W. Bush’s Council of Economic Advisers (1989–90). He is currently the president of the American Action Forum.
Read more by Douglas Holtz-Eakin