Objectively, art is subjective: the vast majority of art is distasteful to most besides those who are parents of or are currently sleeping with the artist. Yet sometimes art is objectively terrible, such as when it, say, promotes the rise of Mussolini’s platform while receiving taxpayer funding, and the artist profits from that unwillingly seized and spent PR cash to move his race-sullied crap on Etsy.

The Littman Gallery at Portland State University is currently exhibiting “IN//APPROPRIATE” by Roger Peet. The exhibit is funded by the Regional Arts and Culture Commission, a public/private commission which receives taxpayer funding through the city of Portland, three Washington counties, and the National Endowment of the Arts, among others.

So, you paid for it.

The below passage is what “IN//APPROPRIATE” is about, according to Peet via an interview with Huffington Post. You may note that Huffington Post Arts writer Priscilla Frank neglected to ask the most obvious, relevant questions about Peet’s exhibit. Presumably she accepts that he both has something new to say (due to her unfamiliarity with the horrors of the prior century) and that his work is a perfectly reasonable use of seized money (due to Peet not saying anything disqualifying like “I love Jesus”):

‘Whiteness Goggles’ Set Out To Change How You See Cultural Appropriation

In the images he created for the series, the history of violence and oppression endured by people of color quite literally becomes the backdrop for the quirky styles and awesome music of white people. Take for example his biting ode to Miley Cyrus. In the image above, she twerks before a crowd of armed policemen in Ferguson, Missouri. In another, Katy Perry poses in a geisha costume in front of an exploding atomic bomb.

“All of the people shown engaging in acts of cultural appropriation … are what you would call white,” Peet explained to The Huffington Post. “Behind them, in the red, is the rest of what whiteness means: the daily violence and brutality of a world system that is bent on turning everything — every sacred grove, every deep note, every singular moment — into an object of value for speculators.” 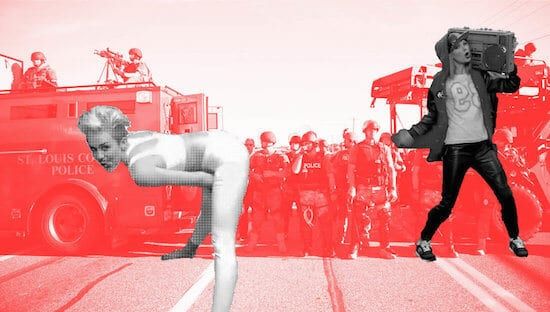 All conflict is race and class, ideas and desires are genetically predetermined, all are categories rather than individuals, and ironically, all goodness will come from eradicating such labels. These tenets brought to their logical conclusion are, of course, the histories of cultural Marxism and Fascism, and 100 million souls lie in the ground due to it.

But Peet wants you to give it another try.

Here he regurgitates century-old attacks on “capitalism,” the Marx-birthed word that assigned evil to the concept of liberty:

“Discussing [cultural appropriation] opens fault lines within groups of people,” Peet said, describing the inspiration for his work, “and reveals some fundamental differences in the ways different people see the world as a result of their contexts of race, class, gender and power. Appropriation is something I think about a lot, because I think it’s a singular way to understand some of the more insidious and destructive ways that capitalism works.”

Specifically, Peet, who himself is white, is referencing what he claims is capitalism’s ability to spin lives, stories, traditions, even suffering, into profitable goods. “Capitalism invented whiteness in order to create a class of people that could parasitize the rest of the world,” he continued. “A people with no connection to history, divorced from place and context, engines of pure abstraction — which is what Capitalism is all about; the conversion of the complex, beautiful world into quantifiable units that can be speculated upon.”

John Locke apparently invented “whiteness” and discovered the inviolable rights of life, liberty, and property … to cash in.

Peet’s following statement about erasure of history is so ironic and lacking in self-awareness I fear he is in danger of exploding into a puff of Little Red Books, so I shall not comment further on it. Let’s just accept that all whites are twerking on Robin Thicke’s crotch, all blacks take pride of ownership in the invention of twerking, and that folks with biracial parents, or Asians who excel at European classical music, or people like Clarence Thomas, who hold ideas unacceptable to Peet’s genetically preassigned racial attitudes, do not exist for the purposes of his thought experiment.

Until such time, of course, that all these identifiers are eliminated by smashing whiteness and the patriarchy, at which point we will all finally — whew! — get to be individuals.