Glenn Beck Rally: How Big Was the Crowd?

There is a puzzling disparity among the estimates offered: USA Today and ABC News headline it merely “thousands” (but USA Today uses “tens of thousands” in the text, while ABC says “more than 100,000”), and the AP offers us “tens of thousands.” The New York Times offers us just “enormous,” while Politico takes the easy way out and simply says “no one can say for sure.” The National Park Service has returned to insisting that they don’t make crowd size estimates, which is true, except on those occasions when they do.

So, once again, let’s see if we can make a reasonable estimate for ourselves. Unlike some of our previous attempts, there seems to be a good supply of photographs.

First, one sent to Glenn Reynolds by Ed Frank, taken from the top of the Washington Monument. According to Ed, this was taken at about 11 am, while people were still arriving: 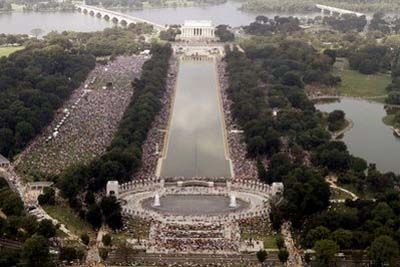 Second, the AP’s own photograph: 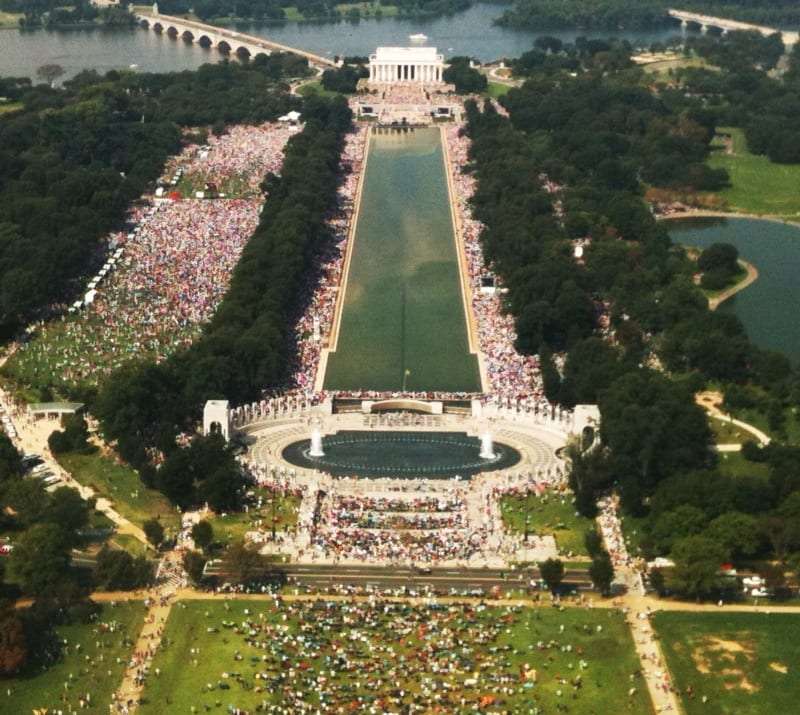 Another AP photograph shows more of the area between the Washington Monument and the end of the reflecting pool: 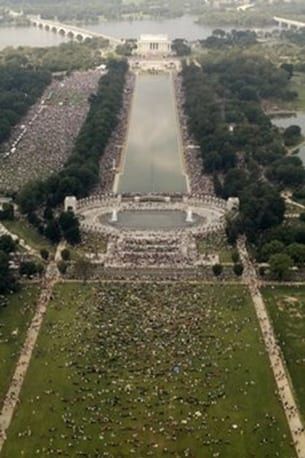 First, look carefully at the crowd, and for context, have a look at this Google Map of the area.

You can see the Memorial on the left, the Washington Monument on the right, and of course these photographs are looking to the west; the reflecting pool is in the middle, and north is to the right.

Zoom in on the north side: we can see the crowd is under the trees, and pretty dense at the adjacent road; it is really up to the Constitution Gardens pond: 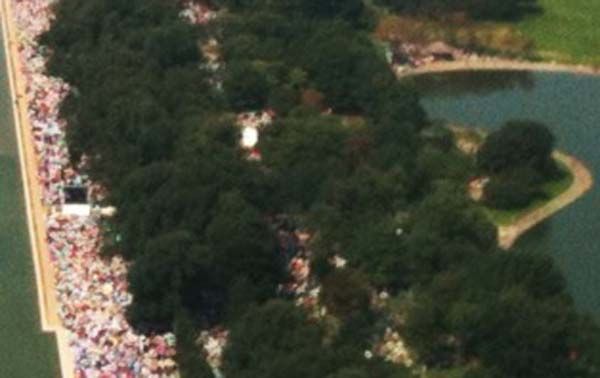 On the south, again, the crowd goes pretty well up to the trees:

Since the last time we made an estimate, my own technology has improved. Using Google Earth, I constructed a polygon that covers the apparent area of the crowd, and another that takes in just the reflecting pool (since there are not a lot of people standing in the water).

With the aid of an excellent online tool, we find the enclosing area is about 223,000 square meters and the reflecting pool about 26,000 square meters. By applying only the least bit of advanced math, we get a total area for the crowd of about 197,000 square meters. The Park Service considers a “dense crowd” to be around 10 square feet per person, or about 0.93 square meters per person — call it 1.1 people per square meter.  If the whole area were packed that densely, we’d have about 215,000 people.

Of course, it’s clear from these pictures that the whole area isn’t that tightly packed; on the other hand, we don’t know when the photos were taken. So let’s make a range of estimates.

These are relatively small estimates compared to some, so let’s just note that I’m taking a very conservative approach:

So these should be considered very conservative estimates, especially as we think about the lower percentages. The total could easily be, say, twice the 75 percent estimate, or about 330,000 people..

Now, as I was completing this piece, CBS News released its own estimate, based, it said, on an estimate they commissioned by AirPhotosLive.com.  That estimate: 87,000 ± 9,000. (Oddly, AirPhotosLive.com doesn’t list crowd estimation or anything that seems much similar in its services, but perhaps that’s just an oversight.)

It appears to me that 87,000 is a real lower bound estimate: that would mean that only about 40 percent of the area had a “dense” crowd. And there weren’t any people in the other areas I didn’t include.

As always, you the reader will have to draw your own conclusions.