How ISIS Plans to Destroy Israel 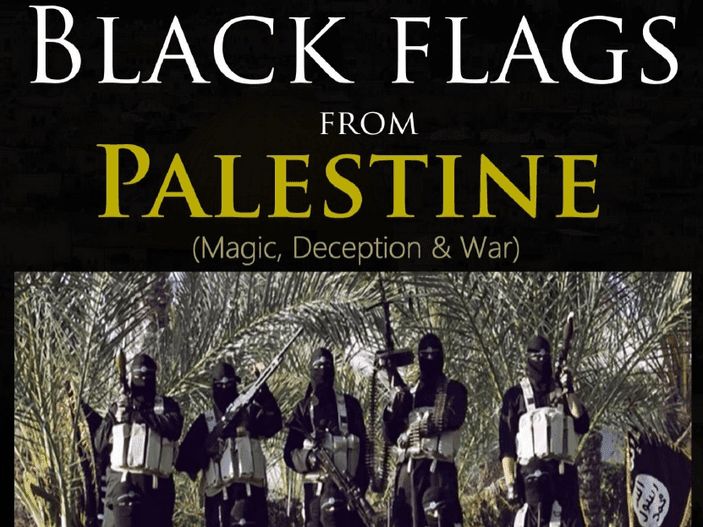 The Islamic State laid out its plans for carving a path to Israel and overcoming the Jewish state’s defenses, from working with establish jihadists in the region to hoping for impassioned geeky converts like Edward Snowden.

The new 150-page book distributed on file sharing sites this week follows other titles in the ISIS series including an e-book on how the jihadists plan to sack Rome.

The title has been expected for months, and declares that the “beginning of the end of Israel” will happen in 2022 — two years after they plan to take Rome.

“Many Christians have been misguided by their priests over the centuries into thinking that if they do not support the Jewish people – blindly, they will earn the wrath of Allah (God),” the book states. “This increases the support group of the Jewish State of Israel even more in the world.” Repeating centuries of blood libel, the book questions why modern Judaism is “imitating the Satanic culture.” The Star of David is referred to as “a symbol of sorcery.”

It cites the hoax The Protocols of the Elders of Zion as source material as the writer gives the ISIS version of Jewish history and aims. Their summary of the Holocaust: “Then World War 2 would begin, some Jews would be put in concentration camps by Germany, only for the survivors to be rewarded with Palestine (why not Germany?) as compensation. No questions were asked.”

The book argues that the names Palestine or Jerusalem aren’t important, but “what matters is the moral nature of the people ruling such a blessed place.”

“If they are righteous believers, then they make the people living under them good and righteous in this holy land, but if they are not righteous and cause corruption in this holy land – then that makes them Allah (God)’s enemy. Allah will purify this land from corrupt people, even if they were God’s chosen people.”

It goes through the Palestinian militant movements over the years, calling the Palestine Liberation Organization (PLO) “a Communist movement who didn’t really care about Islamic teachings.”

The state of Israel is compared to “Florida in America… packed with sunshine, shopping malls, clubs and beaches” and is called “like GTA Vice city more than the chosen land for God’s chosen people,” referring to the video game Grand Theft Auto. “Israel is the country most similar to America in the Middle Eastern world. It is filled with crimes; murder, drugs, corruption, and even adultery and homosexuality is widespread within this holy land. People within Israel live a life of hedonism and materialism, and the whole system from the top to bottom is run on bribery, blackmail and favours.”

The book talks about Israel’s intelligence apparatus, claiming that they control Facebook and Twitter and that “any intelligence” the National Security Agency collects is “directly forwarded” to Israel. It swears that Israel’s public relations strategy is based on “the dark arts of black magic,” much like “a fake kebab burger made out of soya,” including using magic to jam the weapons of mujahedin.

Jihadists are encouraged to learn Krav Maga to better fight an Israeli soldier in hand-to-hand combat, and are advised to recite certain Quranic verses to protect themselves from “black magic.” They’re also told to exploit Jews’ “strong hatred towards each other” and fear of “life and also death.”

And while the PLO is viewed as weak, Hamas gets props as “an organisation whose goal is to liberate Palestine entirely and to leave no trace of Israel on the map.” However, ISIS stresses that they and al-Qaeda disagree with Hamas participating in elections because “democracy is shirk (polytheism).” The book labels this a “difference in politics” that has led to fights between the Muslim Brotherhood and al-Qaeda/ISIS, but lauds Hamas for transitioning Palestinian women from jeans and uncovered hair to “modest clothing” and hijab.

“From rocks, slingshots and Molotov’s in the 1st Intifada, to guns and martyrdom operations in the 2nd Intifada, and now an Islamic army firing rockets at Israel!”

The book credits the June 2014 kidnapping and murder of three Israeli youths — Naftali Fraenkel, 16, Gilad Shaer, 16, and Eyal Yifrah, 19 — to “Palestinians’ who had loyalty to the Islamic State.” Two Hamas suspects, Marwan Kawasmeh and Amar Abu-Isa, were killed in a shootout three months later.

ISIS calls the Hamas-Israel battles, from the use of Qassam rockets to underground tunnels, “a testing ground for the Mujahideen” and Hezbollah’s 2006 Katyusha rocket barrage “a perfect war model.” Palestinians will “explode” like in previous intifadas, they predict, but “much more violently, because in the coming future they will all be seeking martyrdom.” They argue that since Israelis have compulsory military service, every civilian is a legitimate target.

“Hamas’s military arm, the Izzadeen Qassam Brigades, have men (Muraabiteen) who are guarding the frontlines all the time. There are also other armed groups in Gaza such as the Iranian backed al-Jihadi Islami (‘the Islamic Jihad), and Majlis al-Shura (a group allied to the Islamic State). They fire rockets into Israel, sometimes even without the permission of the governing Hamas, which causes Hamas to have some bitterness against them when it makes a ceasefire with Israel.” It says that some members of Hamas, upset with Shiite Iran’s backing of the terror group, “have decided to shift their loyalty to the Islamic State.”

The book notes debates in Europe over whether to continue to brand Hamas as a terrorist organization, arguing that by granting Hamas some legitimacy they’re hoping the group will beat back any ISIS forces who try to use the Gaza Strip as a base for attacks on Israel. “Hamas-ruled Palestine will now be a buffer zone, guarding Israel from the advance of the Islamic State fighters. This is the power of global politics. Allah is replacing Hamas leadership with another people who are more sincere, and who will rely on Him more, who do not fear the blame of the blamers. Many fighters from Izz al-Deen Qassam Brigades have realised this reality and are now leaving Hamas, and instead joining the Islamic State fighters in Palestine.”

It suggests using “open-source technology” such as 3-D printers and reverse engineering to mass produce replicas of captured Israeli weapons.

ISIS pegs the year 2022 as the “beginning of the end” for Israel because of late Prime Minister Menachem Begin’s quote in 1982 during the war with Lebanon about a “historic period of peace for Israel” — “and the land was quiet for forty years.” In addition to citing a Jew for their apocalyptic prophesy, this ISIS book gives some wiggle room on the 2020 timing for the fall of Rome — “Allah only knows best.”

The e-book cites not only Hamas conversions as key to taking Israel, but ISIS forces battling Egypt in the Sinai and “growing” ISIS cells within Israel.

It called the ISIS and al-Qaeda goal “smashing borders till we meet in Jerusalem” like some jihadi A-Team “so Muslim Mujahideen (fighters) can call each other for backup from anywhere in the world, and there is no border or king to stop them.”

Hamas, meanwhile, “remains ineffective in the overall picture of liberating the entire Muslim world from Zionist subjugation.” ISIS says it will carve its “corridor” to Israel, “train and arm all the Palestinians, and take the fight deep into Israel.”

“If Israel destroys this batch of fighters, it doesn’t matter; the corridor allows even more reinforcements of Mujahideen from different parts of the Muslim world to continue the fight.” ISIS claims it is “making allegiances with other Jihadi groups surrounding Israel to make wide corridors of Jihad towards Israel from every side.” Plus, they plan to have a northern pathway into Israel after defeating Lebanon, “which is the Islamic State’s first goal.”

“It is important to note that Hamas continued to remain victorious in its battles against Israel even though it was the poorest nation in the world against the richest (Israel), so imagine the Islamic State with an unlimited amount of fighters without any borders or barriers to stop their influx of fighters and weapons?”

ISIS claims it can cause “information overload” in Israel’s intelligence services by simply having too many fighters “using different creative techniques in their irregular/assymetric types of warfare.”

“There simply won’t be enough manpower for Israelis’ to devise a plan to counter every strategy used by the Mujahideen … Even if Israel has an ‘unlimited’ amount of money, the mere fact that it has an enemy who is coming on the attack from all sides, all the time will itself exhaust it and keep it in a state of constant fear. As a result of this frustration, Israel will resort to mass bombardment and carpet bombing of the entire Muslim world to end the global Jihad, but it will not be able to end the Jihad in its entirety.” Their strategy counts on all Muslims having become mujahedin by this point. “If they target hundreds of Mujahideen, there are bound to be a few who will be able to make an ingenius plan based to evade man-made machines, and to slip into the capital of Israel to cause damage.”

And they’re not just counting on jihadist help: “Good, honest people (like Edward Snowden) who are willing to sacrifice the comforts of life for something greater will most likely be the type of converts who will join the guided Islamic cause.”

“The freedom fighters and truth seekers in Europe will range from left wingers, to even right wingers and those in between. They will be able to see the open mindedness and mercy of Islam and the Mujahideen after many years of deception on the media. They will be like the early converts after the Conquest of Makkah, meaning – they will join the Jihad straightaway after accepting Islam. They will be a good replenishment for the losses Muslims have faced in the Armageddon (Malhamah),” the book continues. “It’s important to note that during this time period, Christianity and the Pope in the Vatican will be fully engulfed by the Zionist system, and many truth-seekers from the Christians will look into Islam.”

Tech geeks will be among the converts, ISIS predicts, helping the Islamic State in the cyber battle.

“If the world is shocked at the Islamic State’s ‘world class expertise’ in ground IED’s, then wait till they make Drone IED’s filled with explosives.” ISIS has released drone images over the past week of support operations as jihadists move in on Ramadi, Iraq.

The book states that the final showdown with the Antichrist, with the Mahdi at the side of the mujahedin, will be at Ben Gurion International Airport — the “Gate of Lod” — where they’ll hunker down and wait for Christ to arrive.