'Putin Committed to Conflict': Even Russian President has 'Doubts' About Latest Ukraine Ceasefire 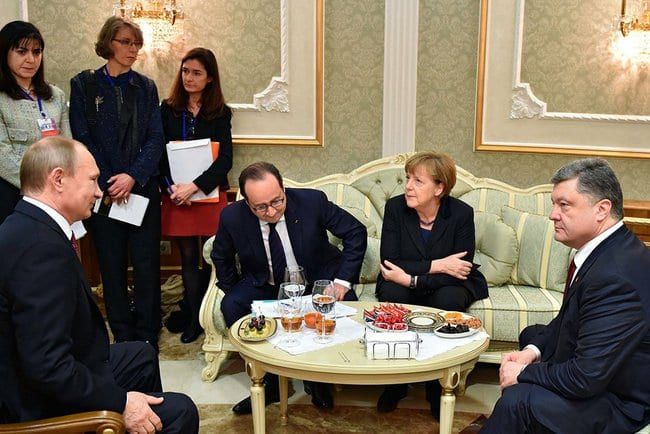 News of a ceasefire agreement set to go into effect Sunday was welcomed by the Obama administration amid unease in Washington that officials may be tempted to let Crimea remain in Vladimir Putin’s hands.

The United States was not a party to the talks in Minsk, hosted by Belarusian dictator Alexander Lukashenko. German Chancellor Angela Merkel and French President Francois Hollande joined Ukrainian President Petro Poroshenko and the Russian president for the meeting that yielded lots of awkward photo ops and the eventual agreement.

Two days after the Sunday ceasefire goes into effect, heavy weapons must be withdrawn from the front lines and Russian-backed militias pulled out from Ukraine territory. Focusing on the rebel-held region extending to Donetsk and Luhansk, Ukrainians are supposed to have control of all of the border areas by the end of the year.

One rebel leader, according to the Guardian, said they’d “give Ukraine a chance, so that the country changes its constitution and its attitude.”

White House press secretary Josh Earnest in a statement hailed the agreement as representing “a potentially significant step toward a peaceful resolution of the conflict and the restoration of Ukraine’s sovereignty.”

“The true test of today’s accord will be in its full and unambiguous implementation, including the durable end of hostilities and the restoration of Ukrainian control over its border with Russia,” Earnest said. “The United States is particularly concerned about the escalation of fighting today, which is inconsistent with the spirit of the accord.”

Indeed, videos were posted online showing intense shelling illuminating the sky in Luhansk after the agreement was signed.

Secretary of State John Kerry said “all the parties must show complete restraint in the run-up to the Sunday ceasefire, including an immediate halt to the Russian and separatist assault on Debaltseve and other Ukrainian towns.”

“The parties have a long road ahead before achieving peace and the full restoration of Ukraine’s sovereignty. The United States stands ready to assist in coordination with our European Allies and partners. We will judge the commitment of Russia and the separatists by their actions, not their words,” Kerry said. “As we have long said, the United States is prepared to consider rolling back sanctions on Russia when the Minsk agreements of September 2014, and now this agreement, are fully implemented. That includes a full ceasefire, the withdrawal of all foreign troops and equipment from Ukraine, the full restoration of Ukrainian control of the international border, and the release of all hostages.”

But what about the C-word everyone was avoiding — Crimea?

“We continue to believe that Crimea is a part of Ukraine. That remains our policy,” State Department spokesperson Jen Psaki said under grilling at Thursday’s press briefing. “We’re talking about our policy as it relates to the sanctions. There’s a long road ahead, and we don’t anticipate that all of these pieces will be implemented in the coming days. We’re certainly hopeful that it will be done rapidly.”

Psaki said the Minsk agreement has “not taken options off the table,” but it takes a bit of pressure off the administration to supply weapons to Ukraine.

“Certainly, our preference would be to see this agreement and components, including a cease-fire, including the pullback of heavy weapons and a complete withdrawal of foreign fighters implemented. And, obviously, that would impact, and we’d correlate our actions accordingly. But discussions are ongoing internally and with our European partners,” Psaki said.

“I think you can expect we’ll see if this agreement can be implemented. But I’m not going to put a timeline or exact criteria on how we’ll evaluate that. Obviously, it will be clear if it’s being implemented or not, specifically with the cease-fire.”

A State Department official said on background that sanctions relief for this agreement would be “separate and apart from the sanctions on – that we have imposed with respect to Crimea, which will be linked to progress on Crimea.”

Putin said he has “initial doubts” about the agreement, particularly in regard to “aggressive actions of the Kiev authorities.”

“Eventually, we agreed with President Poroshenko that we will instruct our experts – I am ready to do so – to establish what is actually going on there. In addition, I will repeat, we will try to develop a set of measures to verify the implementation of our decisions by both sides,” said Putin, who was captured on camera snapping a pencil in half during negotiations.

“I would like to call on both conflicting parties once again to stop the bloodshed as soon as possible and proceed to a truly political process of a long-term settlement,” the Russian president added, according to the Kremlin.

Senate Foreign Relations Committee Ranking Member Robert Menendez (D-N.J.), who is leading the charge from the left on Iran sanctions, warned the administration against dialing back punitive measures against Russia too soon.

“Russia and the separatists in Eastern Ukraine completely ignored their ceasefire commitments made last September and so while I am hopeful, genuine evidence of progress will come only with verifiable compliance on the ground,” Menendez said. “…Sanctions helped to bring Putin to the negotiating table and we should maintain this pressure until we are confident that Ukraine’s territorial integrity has been fully restored, including Crimea.”

In the meantime, he said, the United States “should move forward and establish deeper security ties with Ukraine and other vulnerable countries in Eastern Europe and the Baltic states.”

“Ultimately the most effective way to counter an assertive Russia is to support a strong and unified Ukraine.”

Sen. John McCain (R-Ariz.), called a “weapon of mass destruction” in an RT piece this week for wanting to arm Ukraine, noted the Minsk pact “freezes the conflict at a time of separatist advantage, solidifies the gains of Russian aggression, and leaves Ukraine’s border with Russia firmly under Moscow’s control pending a comprehensive political settlement whose content is unknown and feasibility is unclear.”

“Vladimir Putin must be very pleased with this deal. By changing the military facts on the ground, he has succeeded in forcing a discussion of truce lines inside Ukraine’s territory, rather than the only line that truly matters – the Ukrainian border he violated,” McCain continued, noting Russia never pulled back its heavy weapons as required under the last ceasefire.

“Under the last ceasefire, Russian-backed separatists attacked and captured the Donetsk airport. I fear under this ceasefire, they will attack and capture the port of Mariupol.”

The senator stressed it’s “abundantly clear that Vladimir Putin is committed to conflict.”

“The very night Putin was negotiating a peace agreement, 50 tanks, 40 missile systems, and 40 armored vehicles crossed from Russia into Ukraine,” McCain said. “Some will use this deal as excuse to delay sending defensive lethal assistance to Ukraine. But as long as Vladimir Putin negotiates peace while sending in tanks, that need still exists. As a wide range of national security experts and lawmakers on both sides of the aisle have concluded, providing defensive lethal assistance to Ukraine is not inconsistent with the search for a political solution, it is an essential component to achieving it. Nothing about this deal has changed that.”

Putin announces Ukraine ceasefire at the cost of an innocent pencil (via @CoalsonR ) pic.twitter.com/TYQmIjCMU1