Should the NYPD Even Be Issued Firearms?

The nine civilians shot by the NYPD in a shootout with a man who had just murdered his boss are not happy with the gunfire of the officers in packed city streets:

Robert Asika was among those wounded, shot in the elbow from a distance of around eight feet by one of the two police officers who confronted Johnson. He accused police of “shooting randomly,” and said he saw at least two others hit by police bullets.

Witnesses and officials are now saying that the shooter, Jeffrey Johnson, never fired at police. He pointed his weapon and never fired a shot. If true, then all nine people wounded can be confirmed to have been shot by the two police officers.

In the comments of another post on this subject at my blog, a claim was made that the NYPD does not issue Tasers to beat officers. If this is true—and it appears to be true with only 600 issued (2010) in a force of 34,500 officers—it is a major failing of the New York Police Department, as even rural small-town police forces issue Tasers to all officers as a matter of course. 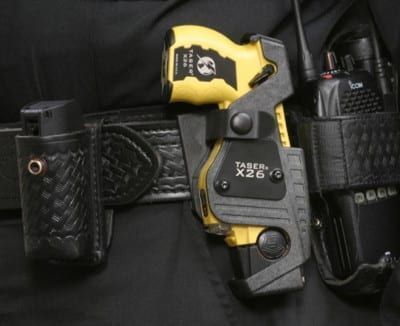 A better choice for crowded city streets? An X26 Taser as used my many police departments, but not by NYPD's more than 30,000 beat cops.

Not making Tasers standard issue to officers in a city as densely populated as New York would be almost criminally negligent, and I’d like Mayor Bloomberg to explain why someone so strongly against the civilian ownership of guns hasn’t taken steps to minimize the threat that handgun-armed police pose to the nine million civilians in his city.

If anything, the number of bystanders hit by police gunfire  in this incident and others suggests that NYPD officers should be armed with Tasers instead of handguns. It simply isn’t possible to use a handgun in many parts of the city without significant risk of hitting and killing innocent citizens downrange of the target.

Surveillance video shows that Johnson was only 8-10 feet away from officers when he pulled his .45 pistol. The range of the X26 Taser issued to many police officers is up to 35 feet. If the NYPD officers on the scene had used Tasers, they could have subdued Johnson without killing him. More importantly, they would not have shot nine citizens.

Mayor Bloomberg and Police Commissioner Ray Kelly have a lot to answer for. While Kelly may be correct that the officers had “absolutely no choice” but to fire into the crowded rush hour streets of Midtown, they were restricted to that choice because of inadequate equipment and training.

There are those that decry Taser “abuse” in some isolated instances by some police departments, and those concerns are valid. That allowed, then Taser is not a non-lethal weapon but a less-lethal alternative to handguns that is of far less risk to citizens downrange of the target.

Perhaps some of the victims of the NYPD will make this point in their inevitable lawsuits against the city for their injuries.

Until the NYPD offers officers a less-lethal option, perhaps it should limit the amount of ammunition officers are allowed to carry.

It worked for Barney Fife.