It’s one of the great ironies of the campaign. The resolutely pro-Obama Huffington Post, the site Barack Obama chose last month to put out his statement on Rev. Jeremiah Wright’s outrageous comments, this month is the source of one of his biggest campaign crises. Its namesake co-owner, the conservative-turned-liberal commentator profiled recently in the New York Times as “Citizen Huff,” Arianna Huffington, was on David Geffen’s yacht in Tahiti when the deal went down.

I’m referring, of course, to the Huffington Post’s report of the now notorious comments Obama made on April 6th at a private fundraiser in San Francisco. There, the freshman Illinois senator, opining about people in small towns where the jobs have fled, said: “They get bitter, they cling to guns or religion or antipathy to people who aren’t like them or anti-immigrant sentiment or anti-trade sentiment as a way to explain their frustrations.”

Those few words, transcribed from a more than 45-minute recording of Obama, buried in the midst of a very ruminative, rather personally-oriented piece by Mayhill Fowler, an activist blogger who supports Obama and contributed the maximum allowable $2,300 to his presidential campaign, kicked off a media firestorm.

“It’s stunning,” Arianna Huffington told me last night, “the way the Clinton campaign has completely distorted the meaning of what he said. It’s stunning Hillary chose to confirm every right-wing demagogic characteristic about her own party.”

“We recognized it was a politically volatile story and thought it would create news,” says Marc Cooper, editorial coordinator of Huffington Post’s “Off The Bus” project for “citizen journalists” such as Fowler. “We had no idea that the controversy would reach this magnitude.”

One person who did is Steve Schmidt, a senior advisor to John McCain who ran Governor Arnold Schwarzenegger’s landslide 2006 re-election campaign, and before that the 2004 Bush/Cheney campaign war room. He seized on a handful of magic words — bitter, cling, guns, religion — in the midst of Fowler’s heartfelt prose about Obama, words that cast the Democratic frontrunner as a demeaning elitist.

“This is elitist behavior by Senator Obama,” says Schmidt. “The condescension he shows toward the values of people who are the backbone of America is very clear.”

Team McCain team swiftly blasted the magic words out through not only its own campaign apparatus but every media organ of the Republican Party. Hillary Clinton’s campaign, reeling from the latest gaffe by former President Bill Clinton, who had just come up with a multi-faceted fabrication to explain Hillary’s multi-faceted fabrication about her Bosnia trip, was only too happy to change the subject by jumping on the issue with both feet.

It turns out that the momentous decision by Huffington Post to run this piece which would cause so much trouble for the site’s preferred presidential candidate was made in just a few hours last Friday morning, with Huffington weighing in via cell phone from the South Pacific.

Some have speculated that the lag time from the San Francisco fundraiser on April 6th to the appearance of the Huffington Post story on April 11th was sign of an internal debate about the story. But that’s not so. The editors never saw or heard what turned out to be the offending quote until early Friday. That’s when Fowler, who lives in the San Francisco Bay Area, had flown to New York and turned in her piece to Off The Bus director Amanda Michel and made her recording available. Huffington Post is run out of Huffington’s Brentwood home in Los Angeles –where editor Roy Sekoff works– and an office in Manhattan, where HuffPo co-founder Ken Lerer –who hosted an Obama fundraiser last year at his Central Park West apartment– lives and works.

Before that, Fowler had turned in a piece which ran April 7th and caused a ripple, with Obama telling the San Francisco fundraiser crowd that he doesn’t need a foreign policy expert as his running mate because he already knows a lot about foreign policy. Huffington, who was about to leave for Tahiti, was concerned about that piece, which had no political impact other than pointing up Obama’s cockiness.

This is when the Obama campaign got more than concerned. The campaign is wisely staying out of the business of publicly expressing dismay about an activist blogger supporter publishing material on a very high-profile new media news and opinion outlet that is taken from a private event to which the press was not allowed. (I asked to attend the event and was told it was “private, off the record, and closed to the press.”) But Obama campaign sources say privately that they are furious with the situation.

They had a different expectation of Fowler. For the past year, the 61-year old Vassar graduate, wife of a wealthy Bay Area attorney, has hung around with people in the Obama campaign and traveled to several states, blogging all the while about her experiences and perceptions of the campaign and candidate. She was seen as an opinionated activist blogger, a supporter, someone who had a tendency at times to lecture the campaign in her copy but was ultimately an enthusiast. She was not viewed as a journalist.

Fowler told her editors that she had more from the private fundraiser, that Obama had said some things about small town America not in his standard stump speech. But she was not sure if she wanted to write more, and would think about it. Since she is unpaid, they didn’t direct her to turn over her recording of the event so they could determine what could be done with the material. The first time they got ahold of the recording was Friday, a few hours before the article and the recording were posted on the Huffington Post.

That, according to sources, is when Arianna Huffington, thousands of miles away in the South Pacific where she was staying on billionaire Obama backer David Geffen’s 454-foot yacht, learned of the brewing issue. She signed off on the story, which was then underway. 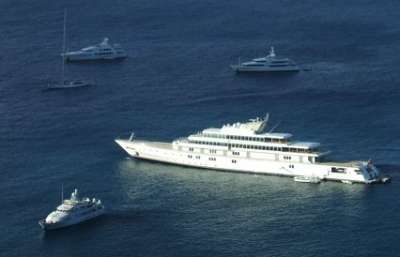 “Roy (Sekoff) and I were on the phone multiple times,” says Huffington. “I agreed with how he and Marc (Cooper) decided to handle it, placing Obama’s thoughts in context and avoiding sensationalism.”

She had not, according to sources, been thrilled with Fowler’s earlier piece from the private fundraiser, with a cocky Obama saying he didn’t need a running mate with foreign policy expertise.

Huffington’s partner in New York, Ken Lerer, according to sources, had not liked the first piece either. Nor was he happy about the second piece. Lerer talked yesterday with top Obama campaign figures in New York and elsewhere.

A Clinton campaign official, speaking not for attribution, described the Huffington Post as “a conveyor belt” for material that is pro-Obama and anti-Hillary. The relationship between the publication and the Obama campaign has been close, and Huffington scored a major coup when she procured Obama’s first statement on the Jeremiah Wright firestorm, which appeared in the form of a personal blog by Obama on the site.

But the Clinton campaign is happy to take thousands of hits in exchange for the cudgel which the McCain campaign and they discovered in the midst of Mayhill Fowler’s post, like the prize in a box of cracker jacks.

Fowler, with help from editors Cooper, Michel, and Sekoff, framed her concerns about how Obama characterized some rural voters in a sympathetic light, with plenty of context. “It was not written in a sensational manner in any way,” says one Huffington Post figure. But the reality is that the piece was simply grist for the campaign mill. Fowler’s heartfelt commentary mattered not in the least; the few magic words contained therein are what mattered. For the Steve Schmidts of the world, who employ smart young researchers to scour media outlets for potentially damaging material, the new technologies that enable a Mayhill Fowler to have a major outlet for her musings are tools to further accelerate the political demolition derby.

“After a short time,” says Huffington, speaking of last Friday, “I didn’t have to call Los Angeles. It was all on CNN International, with constant updates.”

A new media outlet clearly favoring a candidate –and conventional media outlets have faced such questions for as long as they’ve existed– can weigh at some length the impact of what it reports, and make decisions about what to report and what not to report. But in this case, not having had the tape or transcript in advance, with only a few hours to consider what to a political pro is clearly incendiary language to be deployed against the candidate, and with Huffington in Tahiti, there was no lengthy period in which to assess the possible political impacts.

Which, from a journalistic standpoint, is admirable. But distinctly unhelpful to HuffPo’s favorite presidential candidate.

And from the standpoint of Obama campaign figures, the material was gotten under false pretenses. One top Obama hand speaks of the campaign and candidate being blindsided. Fowler was a supporter, a contributor, an activist, a blogger, not a reporter. With the event closed to the press, Obama spoke with less care than he would have otherwise had he known a reporter, of any sort, was in attendance.

With the rise of new media, campaigns frequently hold conference calls for the press, and conference calls for bloggers. The blogger calls are designed to stir up the partisan base, to provide enthusiasts on the Internet with talking points to spread throughout the blogosphere and, to a certain extent, on talk radio, which has a significant overlap on the hyperpartisan right.

This episode may well mean the end of allowing activists who blog access to private campaign events.

But that doesn’t mean that the situation is controlled. Not any more, that is. Cooper makes a good point when he says of the Obama campaign (and this applies to any campaign): “If Joe Shmo Obama Supporter had loved O’s remarks and posted his video of the event to YouTube, and that becomes central to a media frenzy, what do you do about that?”

With all the electronic devices we have, many now highly portable, anyone can become a media outlet. But how many would bother to record 45 minutes of a talk, and prepare a column about the event, without access to a recognized outlet? For all the people pointing little camera devices at Obama that day in San Francisco, no video has emerged of him talking about bitter people clinging to guns and religion.

And for all the talk of how YouTube helped turn the U.S. Senate from Republican to Democratic when George Allen had his “macacca” moment, it was actually a staffer for Jim Webb, tracking the Virginia senator with his little video camera, who prompted the meltdown at a very public event.

Still, the metaphorical cat is out of the media bag. Absent Mayhill Fowler, what Barack Obama thought was a talk in a private setting to a group of supporters would have remained simply that. But sometime, somewhere, some candidate would learn the hard way that his or her unguarded moment was suddenly memorialized for all time by one of those cute little devices clutched in the hands of an eager supporter. Or at least someone who paid to get into the fundraiser.

Private space just got a bit smaller. That might mean that more will get a virtual backstage pass as a result. Or it may just mean that politics will become even more stage managed and less candid.