What Do Hispanics — and All Voters — Want? Survey Says ...

A lot has been written about the changing composition of our country’s electorate. According to Census estimates, Hispanics make up 13% of the voting age population — but the younger generation is coming right behind, and among that under 18 age cohort Hispanics represent 22% of the population. There’s no doubt about it — the electorate will look different in the coming years and Hispanics will play a greater role in determining the outcome of our elections.

This is a looming issue for the Republican Party. In the last three presidential elections, Hispanics have consistently chosen the Democratic candidate. They chose Vice President Gore over Governor George W. Bush in 2000 by 27 points and President Obama over Senator McCain by 36 points in 2008. President Bush managed to curry some favor among the Hispanic community during his first term in office and narrowed the gap, but he still lost their vote by nine points to Senator Kerry in 2004.

However, a recent survey* conducted by The Tarrance Group on behalf of Resurgent Republic offers some insights into areas where Republicans may be able to improve relations with Hispanic voters and garner their support for this year’s elections and beyond. But, make no mistake — this is a steep climb when you consider that a majority (51%) of these Hispanic voters consider themselves to be Democrats, while only 18% call themselves Republicans and 30% say they are Independent.

But, here’s the rub: Hispanic voters’ attitudes about what needs to be done to fix the economy do not line up with what Democrats in Congress are currently prescribing — that is, to spend our way out of it. Indeed, when push comes to shove, a majority (54%) of Hispanic voters say spending less to reduce the deficit should be a higher priority for the federal government right now than spending more to help the economy (38%). Spending less is the clear choice for Republican Hispanics (80%) and Independents (57%), but even Democratic Hispanic voters offer soft support for more spending (49% spend more to help the economy, 43% spend less to reduce the budget deficit). 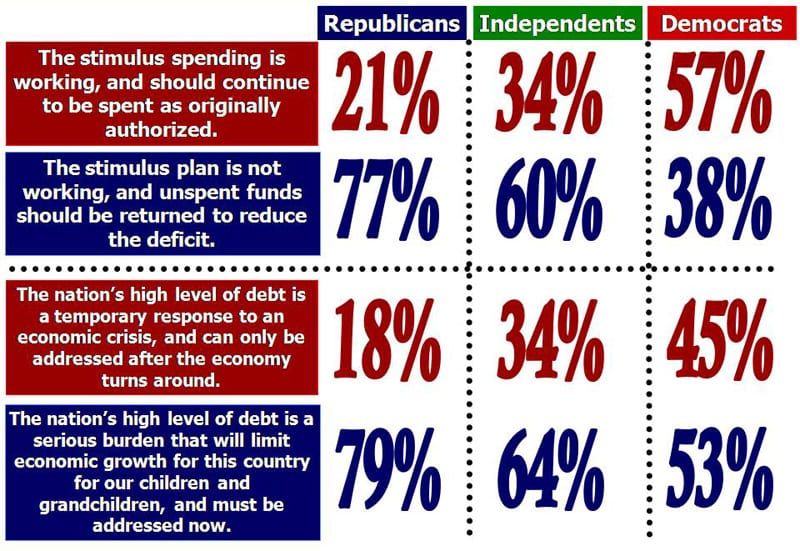 Further questioning also produces a consistent majority preference for less spending. Just over half (51%) say they agree with a congressman who says “the stimulus spending is not working and unspent funds should be returned to reduce the deficit,” and 61% agree with a congressman who says “the nation’s high level of debt is a serious burden that will limit economic growth in this country for our children and grandchildren, and must be addressed now.” While there may be some partisan difference of opinion with respect to the stimulus, there is broad agreement on the need to address the federal deficit now.

This data provides a clear road map for what Republicans should be talking about with Hispanic voters around the country.  And, these deep concerns about spending and the deficit are not singular to Hispanic voters — the rest of the electorate share these worries too. Republicans need to remind all voters what they stand for this November: less debt and less spending.