Do what I think (not what I do)

WASHINGTON (AP) — Just as John F. Kennedy set his sights on the moon, Al Gore is challenging the nation to produce every kilowatt of electricity through wind, sun and other Earth-friendly energy sources within 10 years, an audacious goal he hopes the next president will embrace.
…
Called an alarmist by conservatives, Gore has made combatting global warming his signature issue, a campaign that has been recognized worldwide — from an Academy Award to a Nobel Prize. He portrayed Thursday’s speech as the latest and most important phase in his effort to build public opinion in favor of alternative fuels.

He knows politicians fear to act unless voters are willing to sacrifice — and demand new fuels.

“I hope to contribute to a new political environment in this country that will allow the next president to do what I think the next president is going to think is the right thing to do,” Gore said. “But the people have to play a part.” He likened his challenge to Kennedy’s pledge in May 1961 to land a man on the moon by the end of the decade.

“But the people have to play a part.”
We do hear thee, lord Gore. 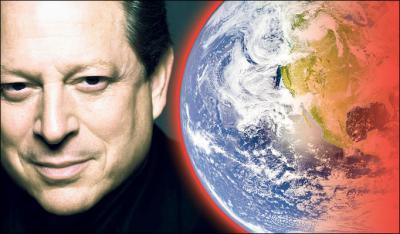 Update: And now there’s this.

The American Physical Society, an organization representing nearly 50,000 physicists, has reversed its stance on climate change and is now proclaiming that many of its members disbelieve in human-induced global warming. The APS is also sponsoring public debate on the validity of global warming science. The leadership of the society had previously called the evidence for global warming “incontrovertible.”

Time is the great equalizer.