And Now, Juan Williams v. NPR in His New Book 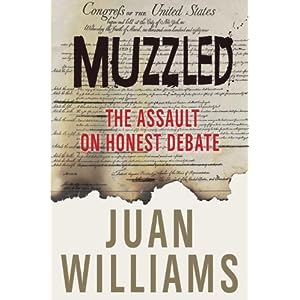 Next week, Juan Williams’ new book, Muzzled: The Assault on Honest Debate, gives the inside story of the smug, holier-than-thou, Whole-Foods-mentality, elitist NPR establishment that showed him the door because, as he told Politico in an interview today, one NPR executive informed him,  he “did not fit their view of how a black person thinks.”  For those of us who have long wearied of the ceaselessly liberal slant of a reportorial staff broadcasting NPR’s  blatant politically cherry-picked faux concern for their favored groups among the  undertrodden (so many Palestinians in Gaza, so few Jews from Malmo),  with their ear-splitting audio vérité acoustics transporting the listener from his or her commute to the marketplace of some pitiable village where NPR reporters have set up camp to ooze their patented brand of “I’m from NPR and I’m here—on the U.S. taxpayer’s dime— to help,” it is perfect summer reading.  As Politico writes:

“Williams ends the book with a final jab at NPR by calling for an end to its federal subsidy. Yet he is also critical of another public broadcasting funding source that would be likely to fill the hole if Republicans were ever successful in their attempts to strip public funding: wealthy individuals and foundations.

“Although Williams had nothing to do with the fundraising sting video by James O’Keefe’s Project Veritas that took down former NPR CEO Vivian Schiller and top fundraiser Ron Schiller, his firing did create the political environment that made them targets in the first place. And the condescending comments that were caught on tape fit perfectly with his own criticism of the organization.

…In the end, Williams’s most stinging criticism of NPR is not racism or liberalism, but arrogance.

“‘ I think the ethos was one in which we operated at a higher level, and people who don’t understand it, and don’t appreciate it, they are the ones that are not as smart, or as well-informed, or as well-educated as we are,’  he said. ‘They felt that they were superior. Is that always liberal? It turns out that in NPR’s case, yes.'”