[Parts of this article originally appeared in Asia Times].

The George Floyd riots — or rather, the anarchist riots that took Floyd’s death as a pretext — give Americans two good reasons to re-elect Donald Trump in November.

The first is that the Democratic Party has surrendered to the politics of resentment so abjectly that its governers and mayors are incapable of protecting life and property. President Trump is magnificently right to invoke the 1807 Insurrection Act and keep the military in readiness to restore order where state and local government have abandoned their responsibilities. I was born in New York City and have lived here all my life and have seen disgraceful behavior by city governments, including the failure of then Mayor David Dinkins to suppress a race riot against the Chabad Hasidim of Crown Heights. But I never thought I would watch the police stand down as looters took control of Midtown Manhattan. New York’s Mayor DeBlasio won’t crack down on his own constituents; after he all, he pronounced himself proud of his daughter for getting herself arrested in the demonstrations. There is no excuse for public riot, and no excuse whatever for state and local officials to fail to protect the public. Whatever the president’s failings, I don’t want to hear about them just now. He is all that stands between us and chaos.

The second is that President Trump understands that the social fabric of the nation depends on rebuilding American manufacturing. We’ve drifted into a services-and-consumption economy rather than an investment-driven, productive economy over the past thirty years, thanks to both the Establishment Republicans and the Democrats. We add trillions to stock market valuations for software companies while Asia–not just China but South Korea, Taiwan, Japan and Singapore–do the heavy lifting in manufacturing. We don’t invest; others invest for us, and lend us the money to buy their products. I’ve criticized the tools that the president has applied to the problem, e.g. tariffs, and I’ve urged him to undertake a series of Manhattan Projects in critical technologies. But Trump is the only politician of national standing who knows that there is a problem in the first place.

That has a lot do with the chaos of the past week.

Economics doesn’t explain everything. Heartbreakingly high rates of incarceration, illegitimacy, disease and poverty among black Americans are tinder waiting for a spark like the death of Minneapolis resident George Floyd in police custody. “What the great French sociologist Emil Durkheim called “anomic suicide” is the Great Plague of our times. Self-destructive behavior in the form of opioid addiction, alcoholism, and violent behavior is destroying the lives of large parts of the US population,” I wrote in this space March 30.

Nonetheless, economics does tell us something, and the chart below gives context to the riots which have wracked American cities during the past several days. 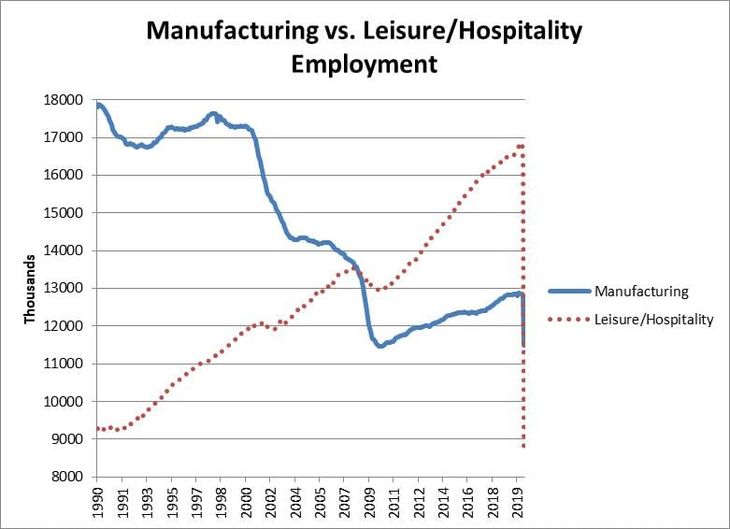 Thirty years ago the United States had twice as many workers in factors than in restaurants, hotels and other leisure and hospitality businesses. Over those thirty years the number of manufacturing workers fell by about half and leisure-and-hospitality employment doubled.  Then came COVID-19, and all the employment gains of the past thirty years evaporated in two months (these are April data, and the picture has worsened since then.

Minority workers in the United States benefited from an employment boom during the Trump Administration, and the black unemployment fell to just 5.8%, the lowest level in American history, thanks in large measure to the availability of low-skilled service industry jobs. These jobs disappeared the fastest and are least likely to come back in the foreseeable future, as Americans save more of their income and avoid crowded public places like restaurants.

Black Americans suffered disproportionately in the epidemic, with death rates much higher than whites, Asians or Hispanics. That may be due to the prevalence of co-morbid medical conditions among blacks, for example, hypertension.  Forty percent of adult blacks suffer from high blood pressure, vs. 28% of whites and non-black Hispanics and 25% of Asians. According to one study, American blacks died from COVID-19 at triple the rate of other races. Whether this is due to poor diet, inadequate preventive care or other factors is outside my area of competence. But it is clear that blacks suffered more.

With the COVID-19 epidemic, the economic prospects of black Americans suddenly turned bleak. As the American economy shifted out of industry and into services, personal consumption took up a larger share of Gross Domestic Product. 70% of US GDP goes to personal consumption vs. an industrial-nation average of 60%.

America also had one of the world’s lowest savings rates—until April, when Americans saved a staggering 33% of their income. Whether American spending patterns will return to pre-epidemic levels is doubtful. A Wells Fargo survey indicated that the base level of consumption would fall by 10%. With negative real yields on high-quality bonds, Americans will have to save more for retirement, and their sense of vulnerability during the epidemic will motivate a higher level of precautionary savings.

Small businesses, meanwhile, continue to struggle. Despite the availability of government loans under the Payroll Protection Program, may small businesses won’t re-open. Businesses with fewer than 50 workers employ 46% of all working Americans, so unemployment is likely to remain at very high levels for a long time. Minority workers are less likely to be re-employed.

Dependence on personal consumption and low levels of savings and investment hollowed out the American economy and made it more vulnerable to shocks like the COVID-19 epidemic. And minority workers, the last hired in the 2009-2019 recovery, were the first fired, and the least likely to be rehired.

Add to this the predicament of a generation of students who paid an average of $35,000 a year for tuition at private colleges (or $26,000 at state colleges for non-residents). They borrowed an aggregate $1.6 trillion to pay for tuition. Many of them graduated unprepared for remunerative work, and subsist on marginal employment, which disappeared during the epidemic.

This is no excuse for violent behavior, to be sure; it is one thing to air grievances in peaceful assembly and quite another to burn police cars, businesses, and even churches, as rioters did in Washington, D.C. and Louisville, KY. But the fragility of a hollowed-out US economy addicted to high consumption and low savings helps explain the violent coda to the COVID-19 epidemic.