A Feminist Hawk in the Big City

As earthquakes, tsunamis, snowstorms, mudslides, and jihad devastate our planet, I sit here reading and writing. My arrows are words, mere words, but as they say, “the pen is mightier than the sword.” Trite, but true. Today, after a hellish week of overturned cars, fallen trees, losses of power (both political and electrical), and huge piles of snow, Manhattan is deceptively quiet, almost spring-like.

But David Swindle—long may he reign!–has made my day. He is the editor over at NewsReal Blog (NRB), an offshoot of Frontpage Magazine. Mr. Spindle has initiated a new feature which he calls “Feminist Hawks.” In it, he defends my honor. Apparently, the New York Times named David Horowitz as the main, or as the only Feminist Hawk. Spindle (in Horowitz’s employ) now points out that it was sexist not to name me, since I am, veritably, the “Godmother” of Feminist Hawkdom and that to discuss this subject without naming me is “an unacceptable injustice akin to ignoring Albert Einstein were one talking about physics.”

WOW! Someone noticed, someone cared—and it certainly was not anyone from my own feminist generation of warriors who view my patriotism and Zionism as traitorous. Swindle also displays the jacket of my book The Death of Feminism. By me, it’s still Purim, everything is wonderfully upside down! The reversal of fortune is sweet.

Now, let me be honest: I no longer resemble the Super Heroine cartoon figure known as Feminist Hawk, but long ago and far away I sure did. Hell, she is still within me. In 1972, I actually wrote an academic Introduction to the reissue of Wonder Women Comic Strips which was all about Amazons. I even discussed this on the History Channel. Yes I did. But now I am, indeed, Feminist Hawk’s Godmother, maybe I could even be her Grandmother if I’d married at a very young age, which I did not do.

And, let me be clear. As I told David Swindle: There are real feminists out here. They are not media icons nor are they Democratic Party operatives. It gives me no joy to attack faux feminists for being exactly what they are: faux feminists. I do not recognize as feminists those Straw Women whom the media or whom politicians happily appointed because they looked “good” and were willing to follow and swallow Party Lines. I will continue to challenge real feminists who have become Stalinized or Palestinianized and who insist on romanticizing Islamic jihad and scapegoating Israel. However, while fifth column leftism and feminism is a problem, the far greater problem is that of jihadic terrorism and barbarism.

With David Swindle’s permission, I am linking to and posting his blog.

I would like to introduce everyone to a dear friend of mine. This is Feminist Hawk. She’s a new associate editor here at NewsReal Blog. She’s in charge of editing our new Feminist Hawks’ Nest sub-blog.

Feminist Hawk was created by my friend, the extraordinary artist Bosch Fawstin, creator of Pigman and author of such works as Table for One, Propiganda, and the forthcoming series The Infidel. He and I collaborated on the basics of her look and design but most of the credit for the success of her belongs to Bosch. There are several images of Feminist Hawk that Bosch has created that we’ll be unveiling and using for different purposes. (And maybe if Feminist Hawk really starts to take flight then we’ll be able to get Bosch to create some more.) 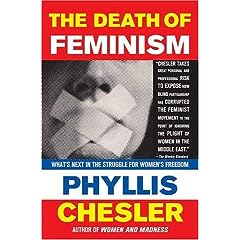 What does it mean to be a Feminist Hawk? Why do we use that term? The meme originates in a single issue: Islamofascist misogyny. This New York Times article identified David Horowitz and FrontPage Magazine as examples of Feminist Hawks. According to the Times‘ piece to be a Feminist Hawk was to take a hardline on Islamist regimes because of the Muslim world’s mistreatment of women. The Godmother of Feminist Hawkdom, Dr. Phyllis Chesler, was unfortunately not mentioned — an unacceptable injustice akin to ignoring Albert Einstein were one talking about physics — though she wrote about it here in a must-read essay which further defined the term. Robert Spencer, another crucial figure in this developing movement, also blogged about it here and listed numerous articles he’d written on the subject.

Here at NRB we want this to only be the starting point, though for what it means to be a Feminist Hawk. To be a Femininst Hawk is not only to champion this vital cause but also to adopt a style and an attitude. Feminist Hawks are confident, aggressive, and confrontational. They fight and will not be bullied. And our Feminist Hawk superheroine is meant to both symbolize and inspire these sentiments.

And just as NRB’s big brother Discover The Neitworks seeks to reclaim the word “liberal” from the leftists who have hijacked it, The Feminist Hawks’ Nest seeks to take back “femnist” from the Marxists who have stolen it. Who are the real liberals today? Who are the real feminists? Those on the Right who stand up for the rights of all persons, not just those of an “oppressed” political constituency.

All I can say: Is it a bird, is it a plane—no, it’s Feminist Hawk Rising.

There are many intellectual freedom fighters who have been vital in bringing me to life but all pale in comparison to my Godmother, Dr. Phyllis Chesler, the original Feminist Hawk.

I was ever so delighted this morning as I discovered my Godmother had given me her all-important blessing in a post at her must-read Pajamas Media blog Chesler Chronicles titled “A Feminist Hawk in the Big City.” You are required to visit and read the whole thing. And make Chesler Chronicles one of your regular blogosphere stops.

If you like what my team of bloggers and I are doing here at The Feminist Hawks’ Nest at NewsReal Blog then you must dive head first into my Godmother’s intellectual work. We are mere chicks, still pecking our way out of our shells. She has been soaring on broad wings, talons bared, for decades. Read this interview conducted by my Freedom Center colleague — and favorite drinking partner — Dr. Jamie Glazov with The Godmother herself here at FrontPage. And click here to purchase The Godmother’s books.