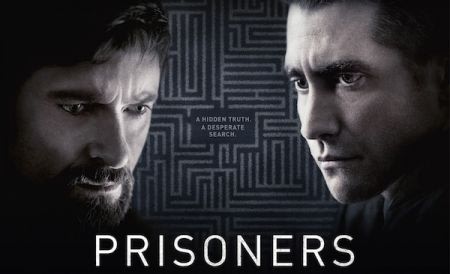 I guess it says something about the state of movie-making these days, that I sat watching Prisoners thinking, “Wow, this is so sharp, it could almost be a TV show!”  The two and a half hour thriller about two girls who go missing in suburban Pennsylvania would have made a great three part drama on New Television but it holds up well on the big screen because of its cast and its theme.

There’s just about nothing I love more than good crime writing, and this is very good. Screenwriter Aaron Guzikowski’s excellent script languished for six years, and was even put on the famous Black List of the best unproduced scripts in the business.  Hollywood doesn’t like bleak and likes children in danger even less. (It took ten years for my kidnapping novel Don’t Say A Word to get produced, and then it only happened because of a threatened strike.) I suspect it was the writing quality and the sheer number of good roles that finally got this to the screen. Guzikowski’s only other produced film is Contraband, an intelligent but flat remake of an Icelandic film. He has an original series coming up on the Sundance Channel, The Red Road, and I’ll watch for it after seeing this.

Look, you can pick at points of the Prisoners plot, but why would you? It’s intense, suspenseful, smart and the characters and actors are terrific. Hugh Jackman plays the troubled but devoted father who takes the law into his own hands in the ugliest possible way. And Jake Gyllenhaal plays a great cop, but one so disconnected from life that he can only mouth platitudes in the face of the parents’ emotional agony. It’s one of the script’s signal features that it makes you root for both these guys, even when they go over the line. Also, I should point out that while there are disturbing story elements, the gore and boo scares are kept to a minimum. The film earns its suspense through good ideas instead of cheap shots.http://www.youtube.com/watch?v=bpXfcTF6iVk

And the theme is faith in a world of suffering — a wonderful subject for drama and handled here with depth, sensitivity, and a complete lack of sentimentalism. This is the kind of thing that makes a movie important, that makes it screenworthy. Watching an idea like this play out is much bigger and more exciting than watching a superhero and villain destroy New York. Again.

Because I know this genre well, I knew the mystery’s solution almost instantly — but that didn’t mean I knew what was going to happen or how it would end. I was on the edge of my seat for the last half hour because the picture is set up so that anything can happen, even after you figure out whodunnit.

Anyway, if a movie is over two hours long, I go in with a grudge, but this won me over. It’s a really good thriller and worth every minute.