Does President Joe Biden really want the United States to cede its hard-won energy independence and leadership position in the world? Because that is precisely what will happen if the president tries to sweep away the inexpensive, reliable forms of energy that have been powering America for decades.

To understand the disaster that awaits the nation if Biden makes good on his pledge to replace fossil fuels with wind and solar power, we need only look to California and Texas, two states that have already tried to do exactly that.

Power outages are now commonplace in California. Its troubles are explained by officials who now admit to an over-reliance on wind and solar power. Even the Los Angeles Times reported:

… gas-burning power plants that can fire up when the sun isn’t shining or the wind isn’t blowing have been shutting down in recent years, and California has largely failed to replace them …

Consequently, the state has fallen thousands of megawatts behind its needs. Governor Gavin Newsom admitted, “we failed to predict and plan for these shortages” and took responsibility for the rolling blackouts. Of course, he wants everyone to conserve while they look for new sources of energy. And that energy will have to be supplied by fossil fuel from neighboring states. This, as California continues its misguided intent to transition to 60% renewable energy by 2030 and 100% “climate-friendly energy” by 2045 (which is required by state law). And note, Biden has gone even further and committed to making the nation 100% renewable within 15 years.

And what about Texas, where an over-reliance on wind and solar power was clearly a major reason that millions of Texans shivered in the dark for several days in late February?

In a desperate attempt to support these politically-correct but expensive and unreliable energy sources, major media outlets and left-leaning legislators are trying to convince the public that wind and solar power problems were not a significant factor in the Texas blackout.

On March 3, Rep. Ro Khanna, a California Democrat who chairs the subcommittee on Environment of the Committee on Oversight and Reform in the U.S. House of Representatives, which is investigating the Texas blackout, sent a letter to the Electric Reliability Council of Texas in which he wrote:

Despite false claims from Texas officials that the power outages were attributable to renewable sources like wind turbines, the vast majority of the dip in electricity supply came from fossil fuel generation. Renewable sources of energy only make up roughly 10% of power in Texas, while over half of the energy comes from fossil fuels such as power plants fired by natural gas.

In “No, frozen wind turbines aren’t the main culprit for Texas’ power outages,” the February 16 article in Austin’s Texas Tribune, Heather Zichal, CEO of the industry group the American Clean Power Association, complained that opponents of renewable energy were “engaging in a politically opportunistic charade” “to distract from the failures” elsewhere in the system and slow the “transition to a clean energy future.”

“It is just a lie that wind turbines, ‘green energy’ are the root causes of the problems in Texas right now,” said MSNBC host Chris Hayes on February 16.

And, of course, the Los Angeles Times attacked those who blamed the blackout on an over-reliance on renewables, implying that the Texas deep freeze was caused by, you guessed it, climate change.

The Times were right in one sense: the impossible effort to ‘stop climate change’ did contribute the blackout. Mark Mathis, president of Clear Energy Alliance, explained,

[M]any of natural gas lines froze because ERCOT cut off electricity to those lines, something a report on the 2011 Texas blackout advised them to be careful not to do in any future deep freeze. Why were the pipelines not powered by natural gas? FERC required them to switch from direct gas power to electricity because that was supposed to reduce greenhouse emissions. Natural gas did provide a lot more power when it was needed. It just couldn’t provide enough.

The really big problem was a lack of reserve margin. Texas has a cushion of about 7.5 to 8.5 percent. That’s half of what most electricity markets provide. With so much power coming from unreliable electricity sources the reserve margin should be at least 20 percent, some say even more.

Dr. Sterling Burnett, senior fellow of the Illinois-based Heartland Institute, showed that Rep. Khanna’s statement that “the vast majority of the dip in electricity supply [during the blackout] came from fossil fuel generation” is highly deceptive. In “Wind and Solar Power Fail When You Need Them the Most,” he explained that there was practically nothing coming from wind and solar in the days before the cold snap. Burnett wrote:

Data from the Electric Reliability Council of Texas shows four days before the first snowflake fell, wind and solar were providing 58 percent of the electric power used in Texas. Fortuitously, the sun had been shining and the wind blowing. These conditions ended, and within a matter of hours more than 13,000 megawatts of wind and solar power went offline. The wind died off and the turbines began to freeze, and winter storm clouds blocked the sun.

The following plot from the Energy Information Administration shows this clearly: 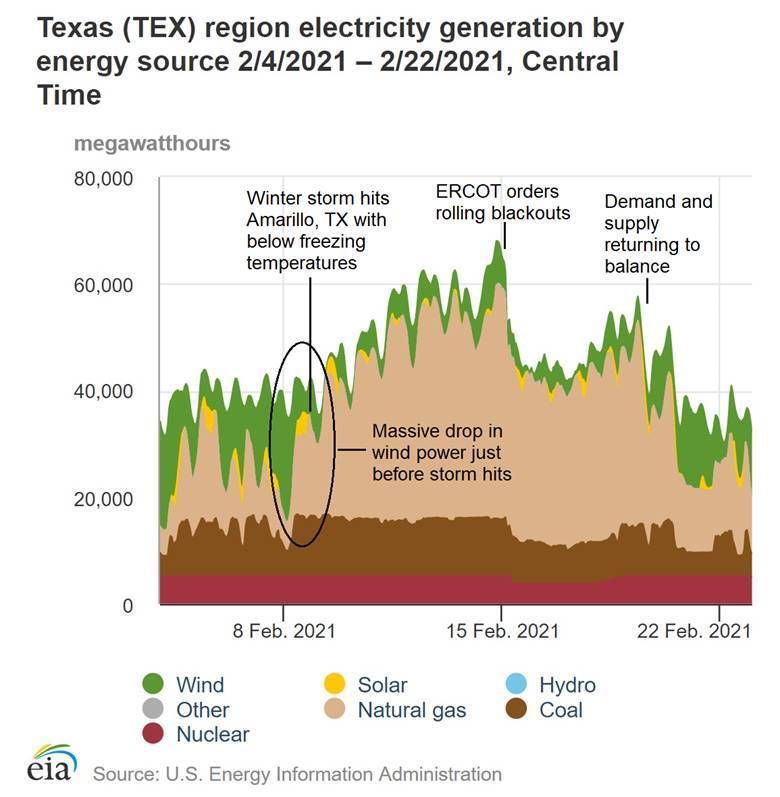 The result was inevitable: over eight million Texans (including Burnett), in more than four million homes, lost lights, power, and heat.

At first glance, it appears that gaining useful energy from the sun and the wind should be possible and relatively inexpensive. After all, we have long used the wind to sail boats and grind grain and the sun to heat a multitude of things. Producing electricity from an intermittent source of power is, however, an entirely different matter.

Most people are unaware that the supply of electricity to an electric grid must equal the demand at all times. At any point when this is not the case, the grid will collapse and we have a blackout, such as in Texas. It is not possible for the supply to almost meet demand; it is all or nothing.

On a large electric grid such as that in Texas, the lack of a small amount of solar or wind power can and will and did cause the grid to crash. If all the available supply of natural gas, coal, or nuclear power is at maximum availability but only one percent or less of the online supply of wind and solar becomes unavailable when the wind is not blowing or the turbine is iced up and the sun is not shining or the solar panels are covered with snow, the grid will and did crash.

Unreliable wind and solar are destabilizing our electric grid. When power drops quickly as it often does with wind/solar, it must be replaced by natural gas in an instant. Too much wind/solar on the grid makes this challenge unreasonably difficult.

It is amusing that a shortage of natural gas is also being blamed, though well it should. Amusing, because the government has been shutting down gas pipelines, but more amusing yet because of the electric energy rule of thumb coined by Terigi Ciccone and this article’s co-author, Jay Lehr. The rule says:

All solar and wind power on an electric grid must be backed up with an equal or greater amount of fossil fuel power (normally natural gas) on standby 100% of the time ready to go online in seconds.

There are those who think that, eventually, wind and solar power can be successfully backed up by batteries. But, as Dr. David Wojick explained in this podcast, it is clearly not possible now, nor will it be at any time in the foreseeable future.

To defeat wind and solar power, we cannot rely simply on informing the public and policymakers about their extraordinary cost and unreliability. We must also critique the root cause of a huge push for these power sources, namely the nonsensical belief that we can control future climate if we transition away from fossil fuels to wind and solar power.

Besides uninformed environmental extremists and anti-Western activists, the push to transition our energy infrastructure has several powerful backers:

Texas Gov. Greg Abbott told Fox News host Sean Hannity that the Texas blackout “shows how the Green New Deal would be a deadly deal for the United States of America.” Even in Montana, where only 900 people lost power for 30 minutes, Rep. Matt Rosendale wrote that the rolling blackouts “demonstrate the dangerous consequences of transitioning away from reliable fossil fuel-based power sources.”

They are completely right of course. Mathis concluded:

More blackouts are coming. Energy IS national security. Every dominant nation must also be dominant in energy, or it isn’t a dominant power.

And this is exactly where Biden is taking America.