The Age of Hyperbole: How Normal Weather Became 'Extreme'

Said Thomas Jefferson: “The man who reads nothing at all is better educated than the man who reads nothing but newspapers.” Jefferson’s comment may be expanded to include most of today’s mass media; this is especially true of television. As American linguist Samuel Ichiye Hayakawa said: “In the age of television, image becomes more important than substance.” It is effectively visual lying, dictated by Marshall McLuhan’s observation: “The medium is the message.” For example, TV news programs often illustrate air pollution with a smoke stack emitting water vapor, implying it is pollution when it is anything but.

Distortion and deception are accentuated by hyperbole. Television news and documentaries frequently report normal weather as “extreme weather,” implying it is abnormal and caused by human activity. But while a hurricane, for example, may inflict serious damage to our structures and cause major loss of life, it is a normal event in hurricane-prone regions, where it is foolish to live without preparing for the weather patterns of the area.

The problem is accentuated when supposedly prestigious newspapers like the New York Times present provably false information. “Summer’s Beast is Loose,” published in the Times on July 16, was an obvious attempt to sensationalize warm, but normal, summer temperatures:

Humans have always been used to the normal fluctuations in weather — including the anomalies that seem to confirm the norm. But now, to the routine, cyclic variations of weather, there has been added a more or less steady, more or less linear change, the result of the way we are altering our climate.

It appears that the Times editorial board didn’t bother to look at the historic climate record — or hoped none of their readers would. Aside from a slight year-to-year increase in temperature variation, the graph of temperatures for July for New York State shows no meaningful overall trend, warming or cooling, since 1900: 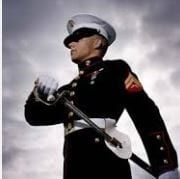 Before expressing their opinion that today’s weather is unusual, you would think that the Times’ editors would have also looked at some basic research, an example being weather expert Dr. David Ludlum’s fascinating works: Early American Tornadoes, 1586-1870 and Early American Hurricanes, 1492-1870. The Times clearly knew of Dr. Ludlum, praising him as “the nation’s foremost historian of American weather” in his obituary published by the newspaper in 1996.  But they pay no attention to what Dr. Ludlum actually wrote.

Here is a challenge for New York Times editors — identify the year from which the following statistics are derived:

In the U.S. 254 people died in tornadoes: 30 in Marquette Kansas; 87 in Snyder Oklahoma; 97 in Southwest Oklahoma; and 40 in Montague Texas. In addition, 40 people died in a November storm in Minnesota.

Globally, typhoons struck the Philippines in July, August, and September; a June typhoon in the Marshall Islands with 500 reported deaths; a storm killed 33 in the Republic of Salvador; severe storms and flooding in Ireland.

Precipitation: Flooding in Ireland; Taylor Texas, received 2.4 inches in fifteen minutes on April 29th; on July 29th 11 inches of rain in southwest Connecticut resulted in extensive flooding that caused a dam to burst.

Arctic ice retreated dramatically allowing an explorer to be the first to enter waters previously inaccessible.

The year was 1905. Note that 254 people died from tornadoes, when the population density was much less than today.

Besides categorizing normal weather events as extreme, terms were created to increase the impression of abnormality. For example, the below map used by Alex Sosnowski, the so-called “expert senior meteorologist” at Accuweather, shows very high temperatures. But it is pure deception: 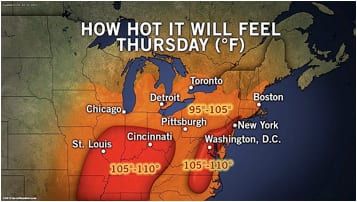 Most readers would naturally assume that actual air temperatures are being shown, but they are being tricked. Instead, a contrived measure called the “heat index” is displayed. Heat index, a statistic Sosnowski refers as the “RealFeel” temperature, is created by combining air temperature and relative humidity. It presumably reflects the capability of sweat to cool the body — but it ignores wind speed, which is a critical cooling agent that makes it seem less hot than it actually is. Of course, in the winter, media meteorologists always cite the “wind chill,” since that makes low temperatures seem even lower. Both heat index and wind chill are simply propaganda tools designed to make viewers think conditions are more extreme than they really are. 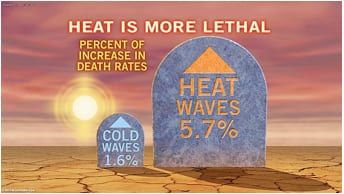 It is completely inappropriate to title the figure “Heat is more lethal.” In reality, more people die from the cold each year than do from the heat.

It may very well be true that there was a higher “percent of increase of death rates” due to heat waves than due to cold periods in whatever time period Sosnowski is speaking of (he does not define the time frame). But this has nothing to do with the actual numbers of deaths. For example, in the warming period from 1980 to 1997, the percentage of heat wave deaths would logically increase more than cold wave deaths, even though cold weather deaths still vastly exceeded deaths due to hot weather.

National energy policies based on deceptions such as this have devastating consequences. Because of President Barack Obama’s dangerously misguided “war on coal,” America’s least expensive and most important source of electric power, electricity costs are rising — making the poor less able to afford air conditioning. This is especially true of those living in poverty in inner city areas where temperatures are already higher because of the urban heat island effect. This situation will only worsen as Obama implements his plan to eliminate coal stations and power costs consequently soar.

The distortion and outright lying in the media’s coverage of weather and climate change have increased dramatically in the past year. This is because the global warming narrative has been exposed as false, making it harder to sell without resorting to hyperbole and cherry-picking data that supports the alarmist agenda. So, publications such as the New York Times are not reporting news any more when it comes to weather and climate. Instead, they are spinning a false narrative to create their version of the news, much like the state-controlled media of communist China.

Sadly, most of the public has been taken in by mainstream media’s climate propaganda. The latest Rasmussen polls show the highest level of support for global warming alarmism since 2008. We can therefore expect Obama to take advantage of the public’s misunderstanding to bring in even more draconian controls on conventional energy sources to “stop extreme weather and climate change.”

If the U.S. eventually collapses into energy poverty, broad sweeping unemployment, and bankruptcy, we will know who to blame.