Is Republican John McCain’s online “official campaign store” being run surreptitiously by a company that has a long track record of helping Democrats win?

It certainly appears so.

Among the many beneficiaries of the political fortunes of Barack Obama has been a relatively small political merchandising operation in Greenville, Ohio, located not far from Dayton. Tigereye Design was designated in February 2007 as the official designer and manufacturer of political buttons, t-shirts, caps, bumper stickers, and other items for the Obama campaign. Tigereye had eighteen employees at the time, but quickly hired an additional 30 workers to pack and ship merchandise sought by rabid fans caught up in the rising tide of Obamania. Soon after the first of the year the company hired yet another 50 employees to handle the ever-increasing sales. There are now over 120 workers at two sites, with three shifts working around the clock to meet demand.

Tony Baltes, the company CEO, has said he expects orders to rise from 2,000 a day to 8,000 a day as Obama closes in on the nomination. Tigereye’s internet retail division, democraticstuff.com, is also seeing gains from the protracted Democratic primary battle, with a four-fold increase in orders since the first of the year. That site sells items that promote both Hillary Clinton and Barack Obama, and includes political merchandise that is not available at the officially sanctioned stores of the two campaigns.

Tigereye is not new to the political game. The company has been providing promotional items to Democratic Party political campaigns and labor unions since Baltes founded it in 1980. Baltes is a dyed-in-the-wool union supporter who claims to have ONLY worked for unions and Democrats — even turning down lucrative offers from Republican candidates in the past.

The company also operates a website called democraticstuff.com. Under “company info,” Tigereye proudly promotes the fact that they are in business to help Democrats win. “Before Democrats can effect change in office, they have to win. That’s where we come in… Tigereye Design is one of America’s leading manufacturers and distributors of Democratic campaign products. We are a Union company (proud members of United Steelworkers Local 3210) that exclusively serves Democratic campaigns, progressive organizations, and labor unions.”

Baltes explained his commitment to the Democratic cause in a 2006 interview with the Columbus Dispatch. He pointed out that he only works with Democrats because it “just don’t feel right working both sides.”

Today, there is every indication that Baltes may have changed his mind about working with Republicans.

Presumptive Republican Presidential nominee John McCain’s campaign has designated goptrunk.com as their “official store” for his campaign. The existence of an “official store” for a presidential campaign is a relatively new political phenomenon which provides the designated vendor with exceptional access to information about donors and trends among supporters. In fact, items purchased from the “official store” are treated and recorded as campaign donations, which is part of the reason why reported campaign donations have skyrocketed this election season. Because these “official stores” gather the email addresses and actual delivery addresses of all who order items online, a candidate/campaign would presumably want to make sure that the vendor they select would have a degree of loyalty to their side of the political aisle.

But one has to ask questions about that presumption after scrutinizing goptrunk.com. The webmaster for Democrat-oriented Tigereye, Chad Groff, owns the cell phone number that was listed under the registration of goptrunk.com. The registration for that site occurred on November 5, 2007, and the registrant is identified as Frog Leg, LLC. Sources within the McCain campaign have indicated that the campaign store operations under the goptrunk.com name will be managed by Frog Leg as the campaign moves ahead. They have also acknowledged that goptrunk.com/Frog Leg has an “affiliation” with Tigereye. 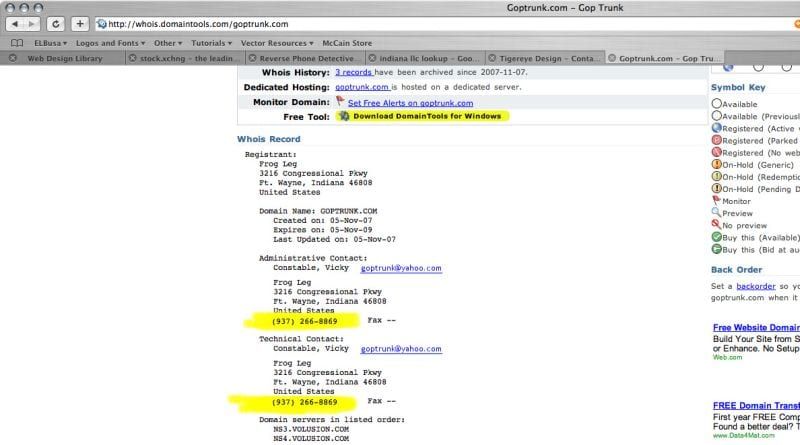 Tigereye owner Baltes was asked about his connection to goptrunk.com and/or Frog Leg, LLC, and he denied that he personally had any connection. He also claimed to have no knowledge of who was actually running those companies. When asked specifically about the connections between Groff, Tigereye, and goptrunk.com, Baltes claimed that “Groff does a lot of freelance work for campaigns.” Following that conversation with Baltes, Groff’s name was suddenly removed from the Tigereye website.

Despite Baltes’ denial of Tigereye’s involvement with the companies that operate the “official web store” for John McCain, there appear to be a remarkable number of connections between the operators of the “official Obama store” and the “official McCain store”: 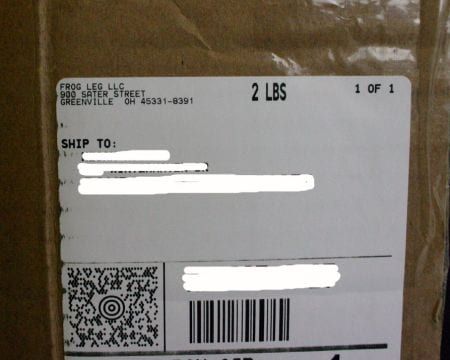 Sources in the McCain campaign claim that confidentiality agreements and security provisions are in place to protect the proprietary information about donors, sales, and volume that might be gleaned from the operation of its “official store” by Tigereye and its affiliates. Yet, the split political loyalties of their “official” vendor will ultimately be difficult, if not impossible, to police.

There is a good reason why polling companies, campaign consultants, direct mail operations, and other political vendors tend to stay on one side of the aisle or the other. Even with a thick set of heavily-lawyered contracts in place, it is doubtful that McCain would knowingly choose to share a polling company, particularly one that had a long history of working exclusively for Democrats, with the Obama campaign.

If the deal is so above-board, why is goptrunk.com so hard to decipher and why is Tigereye so anxious to keep its “affiliation” with the Republican operation secret? It seems clear that the Tigereye donkey has suddenly grown an elephant’s trunk to expand their business operations. The big questions remaining are whether the McCain campaign actually knew what was going on, and whether McCain will benefit from the deal as much as Tigereye and the Democrats it supports.

Steve Gill is an attorney and host of a statewide radio talk show in Tennessee. He also serves as chief political analyst for WKRN (ABC) News 2 in Nashville. His website is www.gillreport.com.