The Week the Wheels Came off Obamacare 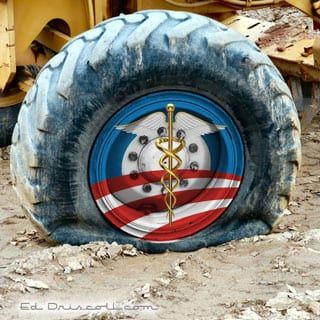 The pols and pundits can argue and fingerpoint until they’re blue in the — finger? — but Obamacare’s numbers paint a bleak picture of broken promises and outright lies. After a full month, nearly 40,000 people have successfully signed up for health insurance at HealthCare.gov, out of an administration goal of over seven million by the end of March. At that rate, the administration will have met its goal sometime in the autumn — of 2028.

Mind you, the goal of Obamacare was to provide coverage for some 47,000,000 uninsured Americans. So take those 15 years and multiply them by about seven. You’re gonna need a bigger calculator.

Ignored in those dreary statistics is the fact that people are being dumped out of their current coverage and onto the nonfunctional exchanges faster than the exchanges can handle them. An estimated 1,500,000 have lost their coverage, up against those newly insured 40,000. The best guess is that seven or eight million more face the same fate.

Which brings us to Kyle Smith in Saturday’s New York Post:

This week was something new. It was the week Obama was revealed to be a stone-cold liar.

Some 10 million Americans are going to lose their health insurance as a direct result of the Affordable Care Act.

On June 15, 2009, Obama said, in one of hundreds of similar statements, “No matter how we reform health care, we will keep this promise to the American people: If you like your doctor, you will be able to keep your doctor, period. If you like your health-care plan, you’ll be able to keep your health-care plan, period. No one will take it away, no matter what.”

Well and simply put, Kyle. But now what? Slate’s William Saletan argues that Obama still has the polls on his side:

In a CBS News survey taken Oct. 1–2, a majority of Americans—51 to 43 percent—disapproved of the Affordable Care Act. Only 43 percent, however, said the law went “too far in changing the U.S. health care system.” Thirty percent said the law was about right, and 20 percent said it didn’t go far enough. The plurality supported the law or an extension of it. In an NBC News/Wall Street Journal poll taken Oct. 7–9, 43 percent of respondents said the law was a bad idea. Only 38 percent called it a good idea. But 50 percent opposed “totally eliminating federal funding” for it, compared with 39 percent who favored cutting off funds.

Those numbers certainly do seem daunting for the GOP, especially since that bickering bunch on Capitol Hill has yet to coalesce themselves around a repeal or a replacement for Obama’s namesake reform act. What Saletan ignores, however, is that the law as structured simply isn’t working. If the solution isn’t a full repeal, then that solution is going to require a president with enough political capital to push it through a recalcitrant House.

And where is Bull***tter-in-Chief, if I may riff off Kyle Smith, going to get enough oomph for that challenging a task? The politics of reforms will get even more difficult for the president as Americans come to grips with the sticker shock of higher premiums coupled with higher deductibles, and as we learn more about HealthCare.gov’s security breaches, blacklistings, (further) service outages, and just basic incompetence.

It gets even worse for the president as details continue to emerge from how Obamacare was enacted. Amy Goldstein and Juliet Eilperin tell a chilling tale in the Washington Post:

Three and a half years later, such insularity — in that decision and others that would follow — has emerged as a central factor in the disastrous rollout of the new federal health insurance marketplace, casting doubt on the administration’s capacity to carry out such a complex undertaking.

“They were running the biggest start-up in the world, and they didn’t have anyone who had run a start-up, or even run a business,” said David Cutler, a Harvard professor and health adviser to Obama’s 2008 campaign, who was not the individual who provided the memo to The Washington Post but confirmed he was the author. “It’s very hard to think of a situation where the people best at getting legislation passed are best at implementing it. They are a different set of skills.”

Maybe the American public really does prefer reform to repeal. In that, they may be wise, because Obamacare has already wreaked so much havoc in the insurance industry and in the delivery of medical services, that there may be no putting Humpty Dumpty back together.

Obama demanded a law to “fundamentally transform” American healthcare. The law he got is largely the law he wanted — largely through subterfuge and lies. As the chief executive of that law, it was his administration’s job to implement it, and they failed miserably. Will Americans now trust him to reform it? It seems unlikely. More likely, the country will hobble along aimlessly for another three years with low growth, poor employment, and a worsening health care system. That’s a terrible price for an entire nation to pay for the sake of one man’s hubris and mendacity.

Obama broke this, but we have to buy it — from a website which doesn’t work.