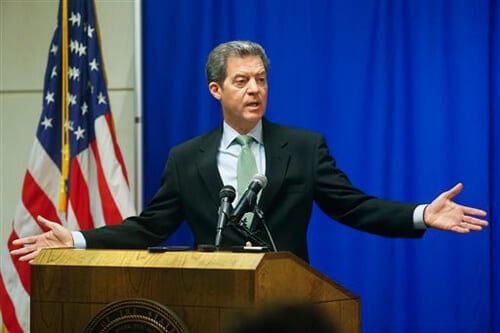 Kansas Gov. Sam Brownback addresses the media about the legislative session during a press conference on Tuesday June 16, 2015, at the Kansas Statehouse in Topeka, Kan. (Chris Neal/The Topeka Capital-Journal via AP)

Separated by America’s longest river, a man-made border, philosophy and religious beliefs, the neighboring chief executives of Missouri and Kansas have drawn lines in the sand on the issue of gay marriage that are as different as the divide between their political parties.

He issued Executive Order 15-05, “Preservation and Protection of Religious Freedom,” on July 7. It is intended to protect the religious freedom of Kansas clergy and religious organizations.

Across the Missouri River in Kansas City, Mo., where gay marriage had been banned, Gov. Jay Nixon (D-Mo.) signed his own executive order, telling all Missouri state agencies and departments to immediately fall in line with the Supreme Court’s gay marriage decision.

Brownback’s office said the Kansas Republican’s executive order recognizes protection of religious liberty from government infringement as a fundamental state interest and complements the protections of the First Amendment of the U.S. Constitution and Section Seven of the Bill of Rights of the Kansas constitution.

Of course, this is all about gay marriage and the Supreme Court’s ruling that legalized it in America.

Brownback said his executive order is not intended to circumvent the court’s ruling. He just wants to protect the rights of the Kansas religious community to politely — and legally — decline to bring one man and one woman together with one man and one woman, respectively.

In a nutshell, EO 15-05 prohibits state government from taking any discriminatory action against any “individual clergy or religious leader” or any “religious organization” that chooses not to participate in a marriage that is inconsistent with a sincerely held religious belief or moral conviction that marriage is or should be recognized as the union of one man and one woman.

“We have a duty to govern and to govern in accordance with the Constitution as it has been determined by the Supreme Court decision. We also recognize that religious liberty is at the heart of who we are as Kansans and Americans, and should be protected,” Brownback said in a statement that coincided with his signing of EO 15-05.

“The Kansas Bill of Rights affirms the right to worship according to ‘dictates of conscience’ and further protects against any infringement of that right,” he added. “Today’s Executive Order protects Kansas clergy and religious organizations from being forced to participate in activities that violate their sincerely and deeply held beliefs.”

“This landmark ruling was a historic step forward for our nation, and it has some very real benefits for families here in Missouri,” Nixon said. “As governor, I’m committed to protecting the rights of all Missourians, and that’s why this morning I am signing Executive Order 15-04 to ensure the Supreme Court’s ruling is implemented uniformly throughout state government.”

His office also said Nixon’s EO makes it clear local governments have an obligation to comply with this ruling.

It looks like court challenges to Nixon’s order from organizations advocating opposition to gay marriage as a religious liberty are not on the horizon.

KMBC-TV reported the Missouri Baptist Convention Christian Life Commission and the Missouri Family Policy Council dropped a lawsuit they filed against Nixon’s 2013 executive order regarding the state’s recognition of gay marriages performed in other states.

Yet, court action could be coming in Kansas. The gay-rights organization Equality Kansas sees Brownback’s executive order as nothing but an attempt to nullify the Supreme Court’s ruing in Kansas.

“Our initial interpretation of this order is simple: It’s one part scare tactics, one part ducking his constitutional responsibility,” Equality Kansas posted on its blog the day Brownback issued the order.

“We are incredibly disappointed by Governor Brownback. Instead of treating LGBT Kansans fairly, his only act has been to double-down on treating us as second-class citizens.”

Equality Kansas leaders have also said their attorneys are looking into Brownback’s executive order. If there is an opportunity to challenge it in court, they said Brownback “will find himself facing some very expensive litigation.”

However, it may not have to come to that.

Tom Witt, the executive director of Equality Kansas, told the Kansas City Star Brownback does seem to be falling in line with the Supreme Court ruling “with more of a whimper than a bang.”

But, if Witt is wrong, Brownback should be able to bank on the support of groups like the Liberty Counsel based in Orlando, Fla.

“Natural marriage cannot be redefined by government without stepping out of the bounds of nature and nature’s God, who was recognized at the founding of our nation as the very source of our liberties,” Criner said.

Mat Staver, the founder and chairman of Liberty Counsel, said, “The Supreme Court has historically made a number of bad rulings that time and justice have been able to realize and overcome.”

“Like Molly, each of us should vow not to be intimidated but, instead, to stand united for our God-given liberties and the rule of law.”

Nor will Brownback stand alone among his colleagues. The attorneys general of 15 states, including Kansas, have sent a letter to congressional leaders asking them to protect the federal tax-exempt status of religious organizations that refuse to take part in gay marriages.