While the Democrat-leaning media continues to scare undecided voters with bedtime stories about some mythical angry McCain supporter whom nobody has seen, here is a real district attorney’s complaint documenting an unprovoked assault by an enraged Democrat against a McCain volunteer in midtown Manhattan: “Defendant grabbed the sign [informant] was holding, broke the wood stick that was attached to it, and then struck informant in informant’s face thereby causing informant to sustain redness, swelling, and bruising to informant’s face and further causing informant to sustain substantial pain.” 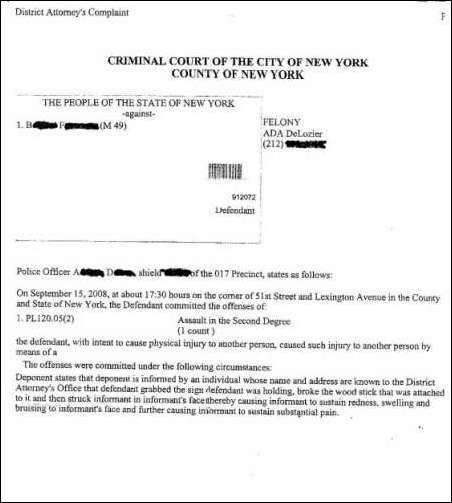 The overly formal document doesn’t mention this important detail: the victim was a small, quiet, middle-aged woman wearing glasses, and the attacker was a loud, angry man who went into orbit at the mere sight of McCain campaign signs.

On a Monday afternoon, September 15, 2008, three McCain volunteers were holding campaign signs and distributing leaflets on a busy corner of 51st Street and Lexington Avenue. As they were peacefully talking to each other, they were approached by a man who, in the words of the victim, provided the impression of “a rather benign, doughy-looking guy — not a person I would have expected to assault me.” 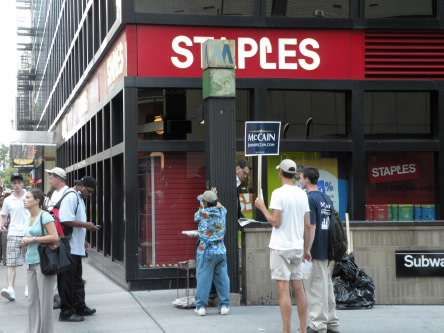 He rushed towards them, grabbed a McCain sign off a volunteer’s hands, and tore it apart. That didn’t seem enough.

This is how the victim describes it:

I said, “What are you doing? You can’t do that!” And he was red in the face screaming, “You people are ridiculous!” And I said, “Yeah, whatever, but you can’t do that.”

So I reached for the sign that he ripped up, and he grabbed another sign, broke it, and ripped it to shreds. And when I said, “You can’t do that,” he took the stick from the sign and started beating me on the head with it. He broke the skin on my head, he scratched my wrist, and almost broke my glasses, and then he left.

I followed him down the stairs to the subway until I could get the police and I said, “You’re not going to get away with it.” And as soon as he saw the police he immediately went calm. He still had the stick in his hand, and you could see the injury on my face, and he admitted it. He was arrested. He actually said, “I don’t know why I did this. It’s just those signs, and this election, it has me so upset.”

Some people are losing control, and it’s not the people on the right. Never have I seen that behavior with any of the people on my side of the fence. … It’s just not our way. Look at us, most of us have never been protesters. … Do I feel that the left is aggressive and potentially violent? Yes, because we’ve all seen it. I certainly have … firsthand! 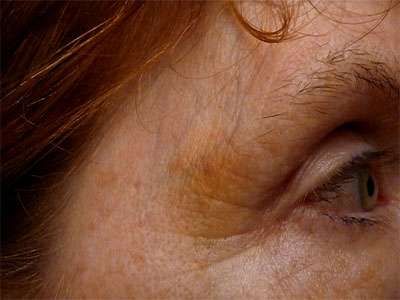 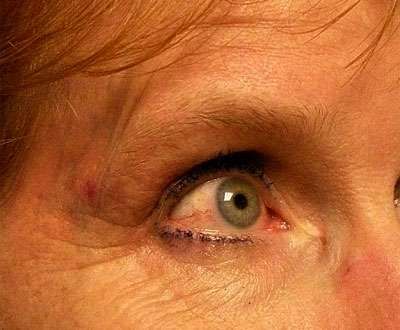 A more detailed account of this story can be found on this blog, as well as in an interview she gave to a reporter from France 24 TV station. 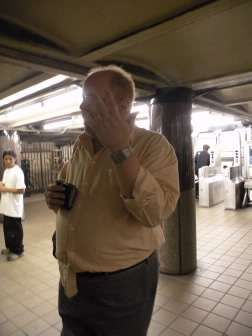 The attacker: shielding his face from the camera while talking to the police

What came over him? Probably a hangover after that MSNBC election coverage. He might as well have continued living a benign life if the one-sided media election coverage and the Democratic Party’s scorched-earth propaganda strategy hadn’t turned this New Yorker into an enraged, quixotic attack machine slaying Republican “dragons” in the middle of a liberal city.

I suspect that if the roles were reversed and some angry Republican man had launched an unprovoked attack on a frail, bespectacled, Obama-supporting female the media would have had a field day, never letting this story off the front pages up until the election.

Will the media run with a story of an Obama supporter who went berserk at the sight of McCain signs and repeatedly struck a woman volunteer on the head with a stick?