“Too Many Births Said to Threaten the Climate” read the headline in the November 19 edition of the French daily Le Monde. The headline refers to the new “State of World Population 2009” report published by the United Nations Population Fund (UNFPA). The document is called a “report,” but in light of the unabashed and unrelenting advocacy of which it consists, it might be better described as a “pamphlet.” Subtitled “Facing a Changing World: Women, Population and Climate,” what it advocates is combating “global warming” (“There is no time for delay; we are already on the precipice”) and its novelty is precisely to suggest that limiting population growth could represent a crucial contribution to this end.

While protesting — evidently too much — that “no government or United Nations entity is suggesting to ‘control’ population,” the UNFPA pamphlet estimates that population growth has been responsible for some 40-60% of the supposedly climate-driving growth in carbon dioxide emissions. It also contains passages like:

No human is genuinely “carbon neutral.” … Therefore, everyone is part of the problem, so everyone must be part of the solution in some way. The world’s Governments and peoples will need to work together on every aspect of the factors that increase greenhouse-gas emissions. One such factor is the earth’s growing population.

The low-variant projection assumes lower fertility rates that might result from increased access to reproductive-health services, including family planning. … One study of the cost of averting a fixed amount of fossil-fuel carbon-dioxide emissions found that dollar-for-dollar, investments in voluntary family planning and girls’ education would also in the long run reduce greenhouse-gas emissions at least as much as the same investments in nuclear or wind energy.

The UNFPA pamphlet provides no sourcing for its claim that population growth accounts for 40-60% of growth in CO2 emissions. It merely states that this is a “consistent finding.”

At a recent conference on climate alarmism at the European Parliament in Brussels, however, the econometrician Ross McKitrick of the University of Guelph pointed to a startling detail that has been largely overlooked in the debates on climate change: namely, that estimated per capita global CO2 emissions have in fact remained virtually constant since 1970. (The Brussels conference was organized by the British MEP Roger Helmer of the recently-formed European Conservatives and Reformists group. For the program, see here.)

The below graph from the U.S. Department of Energy’s Carbon Dioxide Information Analysis Center (CDIAC) shows the global per capita emissions data. 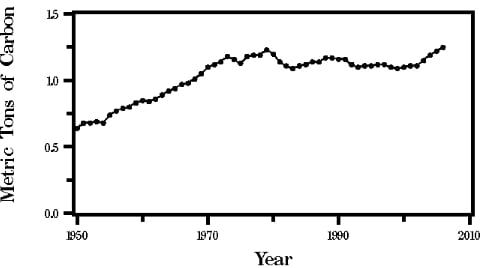 The lack of increase in per capita emissions means that since 1970 virtually all recorded emissions growth can be statistically accounted for by population growth. As it so happens, this period corresponds almost exactly with a major uptick in instrumental temperature data representing the bulk of the “blade” of the IPCC’s famous “hockey stick.”

Moreover, as the below graph from the CDIAC shows, per capita carbon emissions in the U.S. have in fact fallen since 1970 (and remained virtually constant since around 1990).

Per capita Carbon Emission Estimates for the United States of America 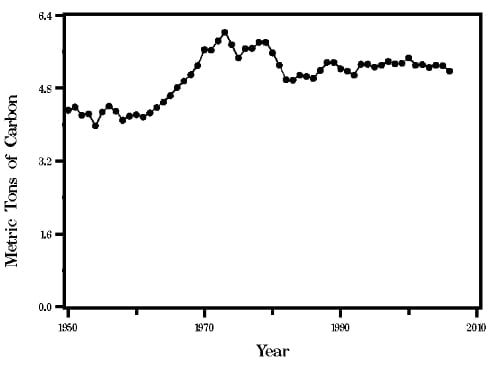 A similar pattern is observable for other developed countries. (See here, for instance, for Western Europe.) McKitrick thus suggests that recorded emissions growth is a combined effect of population growth and the increasing carbon-intensity of life in the developing world.

The UNFPA pamphlet actually acknowledges the constant per capita carbon emissions in the United States since 1990, stating that “[for] the United States as a whole, the country’s total emissions rose in parallel with its population, at 18 per cent a year” (p. 22). Of course, the real annual rate of growth of the American population for the period in question was nowhere near 18 percent! Presumably, what the UNFPA authors meant is that population and emissions grew by 18 percent over the entire period. It is interesting to note that in this context, the pamphlet cites none other than President Barack Obama’s chief science advisor John Holdren, the rediscovery of whose early writings on population control provoked widespread controversy earlier this year. Oddly enough, the implication of Holdren’s cited observations is that population growth should precisely increase per capita energy consumption and hence, presumably, per capita emissions. The very data previously mentioned by the UNFPA authors shows this to be wrong!

Ever sensitive to the latest ideological signals being sent by European or international institutions, France’s Le Monde had no trouble assimilating the lessons of the UNFPA “report.” “Of course, over the course of its life a Nigerian infant stands to create a much smaller ecological footprint than a little American,” the paper wrote. “But the developing countries are undergoing rapid [demographic] growth that produces a great deal of carbon emissions.” In recent months, researchers and journalists have called our attention to the ostensible “threat” to the climate represented by the “carbon footprints” of livestock and even the family dog. Now, however, the UN has identified another whole category of “climate offenders.” Babies.