From Sandy Hook to Malpractice?

As we approach the anniversary of the Sandy Hook Elementary School tragedy, it has become clear that civilian disarmament proponents use 20 dead children to promote their disarmament agenda. Missing from the dialogue are many truths they intentionally circumvented.

Government mandates that taxpayers support government-run schools, but exempts itself from responsibility should your children die while in school custody: The Supreme Court rules repeatedly, via cases like DeShaney v. Winnebago and Castle Rock v. Gonzales, that government agencies have no duty to protect your children.

Taxpayers also fund tuition for Obama’s — and other government employees’ — children at Sidwell School, which employs 15 Special Police Officers and other security personnel to provide armed defense against the terror that resulted in Sandy Hook Elementary School being razed and replaced, costing taxpayers another $50M.

These discrepancies don’t stop doctors from promoting their disarmament agenda. In May 2013 — two weeks after the Senate failed to advance gun control legislation promoted as the result of Sandy Hook — the American Academy of Pediatrics (AAP) sent “more than 100 pediatricians to Capitol Hill” to lobby Congress to pass restrictive gun laws, citing various research as proof that “where there are more guns in the United States, there are more people dying.” What follows is an example of “research” supporting their agenda.

Publishing in the medical journal “Pediatrics,” researchers surveyed “assault-injured youth” seeking emergency care in Flint, Michigan. Their objective was to explore why “firearm violence is a leading cause of death among youth” and their conclusion was “assault-injured youth had high rates of firearm possession.”

Media immediately promoted this as a general truth. For example, U.S. News led with: “Nearly one in four young people who come to an emergency room with an assault injury owns a gun.” USA Today wrote: “Gun violence is a leading cause of death among young people in the USA, and with it comes notably high rates of gun possession.”

But by not fact-checking, media failed to act as a disseminator of truth and government watchdog, instead becoming a promoter of government policy, and socially engineering public opinion to support that policy.

The researchers promoted a misleading definition of “youth” in order to imply that children are at grave risk. They referred to “child” or “children” five times in their paper. Oxford English Dictionary (OED) defines the word “childhood” as “the time from birth to puberty.” OED defines “puberty” as“the period during which adolescents reach sexual maturity and become capable of reproduction, distinguished by the appearance of secondary sexual characteristics.” There seems to be general agreement that puberty concludes by age 15, so true children are ages 0-14.

They included the term “adolescent” 14 times. Psychology Today says adolescence is “the teenage years between 13 and 19.” Even though they surveyed subjects aged 14-24, the average age was 19.8, so many of their subjects were adults, not adolescents or children.

They “dropped” gang involvement from their “final model” because “only 3% of the sample…endorsed gang membership.” This doesn’t mean 3% were gang members, only that 3% “endorsed” it.

Their study ran from February 2010 to September 2011. In May 2011, NBC called Flint the most dangerous city in America, noting: “Flint police chief Alvern Lock stated late last year that he believed the city’s violence stemmed from drugs and gangs.” [emphasis added]

In May 2012, the FBI announced the arrests of 22 “Howard Boys” street gang members on Flint’s south side, for crimes including “committing murder in aid of racketeering, attempted murder in aid of racketeering and use of a firearm during a crime of violence, possession of a firearm by a felon, dealing in firearms without a license, and distributions of cocaine base.”

In May 2013, a member of Flint’s “Dayton Mafia” street gang was sentenced to 10 years for being a felon in possession of a firearm, and five years for “possessing a firearm to further a drug trafficking crime.” Two others were found guilty during the same trial. The Flint Journal report ended with a list of 10 other gang members “sentenced to jail time for their involvement in the gang.”

In June 2013, Flint Journal reported: “Two Flint brothers who were portrayed as the center of the violent Pierson Hood street gang have been sentenced to prison but could still face more time behind bars following an upcoming trial for a Mt. Morris Township double homicide.” Three other gang members also pled guilty for their roles in the murders, and dozens of others were charged.

Anecdotes don’t prove that all firearms injuries are gang-related, but FBI crime data show that gangs are more violent than the average criminal, and that the Pediatrics researchers selected the age group most likely to be involved in gang violence:

Gang members are more violent, and more likely to use firearms to commit violence, than the average criminal. Gang activity is common in Flint, Michigan. Gang violence sends more gunshot victims to the hospital.

This validates researchers’ findings that 37% of study subjects possessed guns “primarily for protection,” and why 85.5% experienced a “serious physical fight” during the six months prior to their hospital visit.

Researchers surveyed an exceptional demographic group to “prove” that there’s a relationship between firearms and violence, but those surveyed aren’t like the generally law-abiding, non-violent youth living throughout America.

Of those admitting to firearms possession, one-seventh were “younger than 18.” They’re admittedly criminal: Michigan law requires buyers to be over 18. Over one-third owned a handgun, but handgun possessors under age 19 violate federal law. Over 40% carried outside the home, but Michigan’s concealed carry law requires a minimum age of 21. Researchers’ own data proved their subjects were criminals:

The Bureau of Justice Statistics (BJS) recently reported: “Gun-related homicide is most prevalent among gangs and during the commission of felony crimes.” Those involved in violent criminal behavior commit more gun-related violence.

The BJS also reported that for ages 12 or older, the firearms homicide rate declined 50%, and the non-fatal firearms injury rate declined 75% between 1993 and 2011. The BJS noted: “About 70% to 80% of firearm homicides and 90% of nonfatal firearm victimizations were committed with a handgun.…” Meanwhile, the civilian firearms inventory increased 57% and the handgun inventory increased 79%.** Correlating violence versus legal handgun ownership shows a strong negative correlation (more handguns, less violence). While this doesn’t prove that more guns cause less violence, it refutes attempts to link firearms ownership with violence.

The graph below contains Centers for Disease Control (CDC) mortality data for ages 14-24, which exhibit a stronger negative correlation with handgun ownership than the BJS’s data, which showed a 39% decrease in firearms homicides for ages 12+, while the CDC reported a 55% decrease for the 14-24 age group. 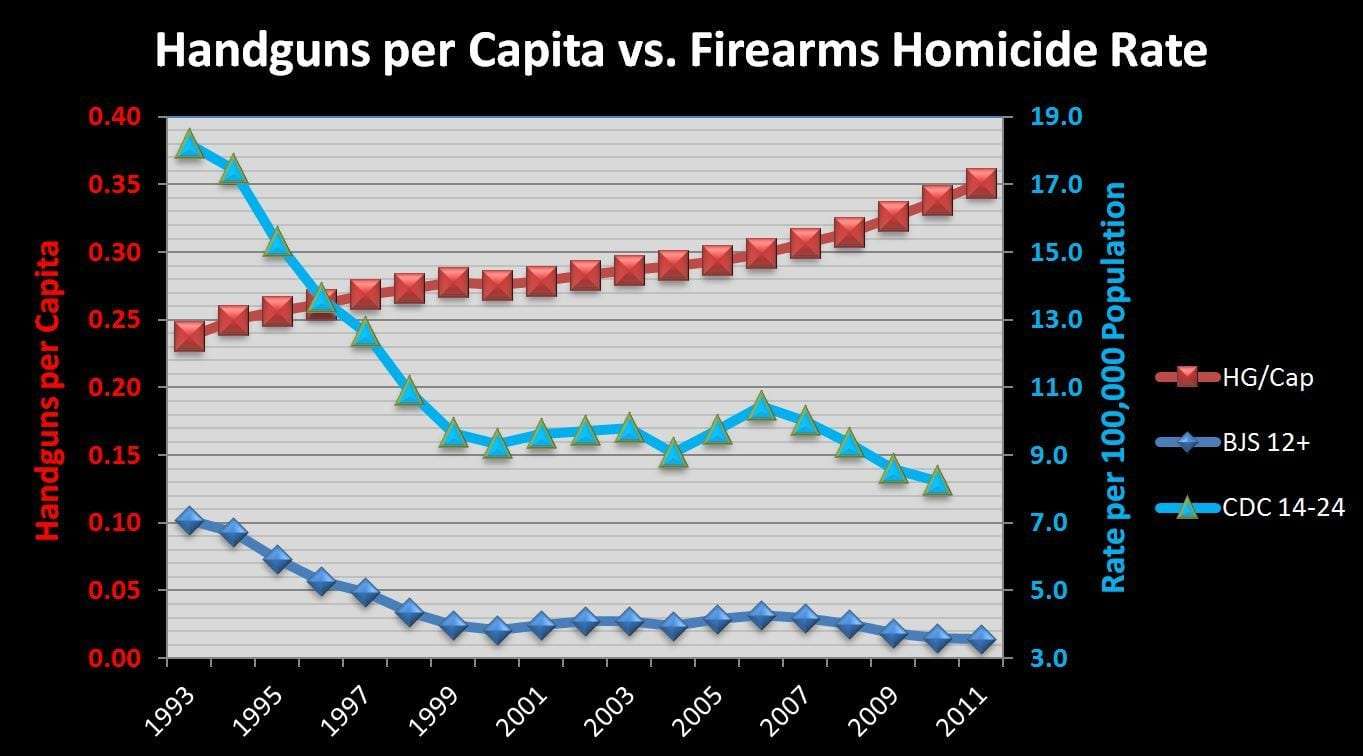 The CDC shows a different but incomplete picture for non-fatal firearms assaults of victims aged 14-24. There was an 8% increase in the assault rate for years 2000-2011, but since the CDC doesn’t provide online data prior to 2000, it’s impossible to determine if rates were even higher for 1993-1999. When correlated with handgun ownership, the CDC data still show a weak negative correlation. 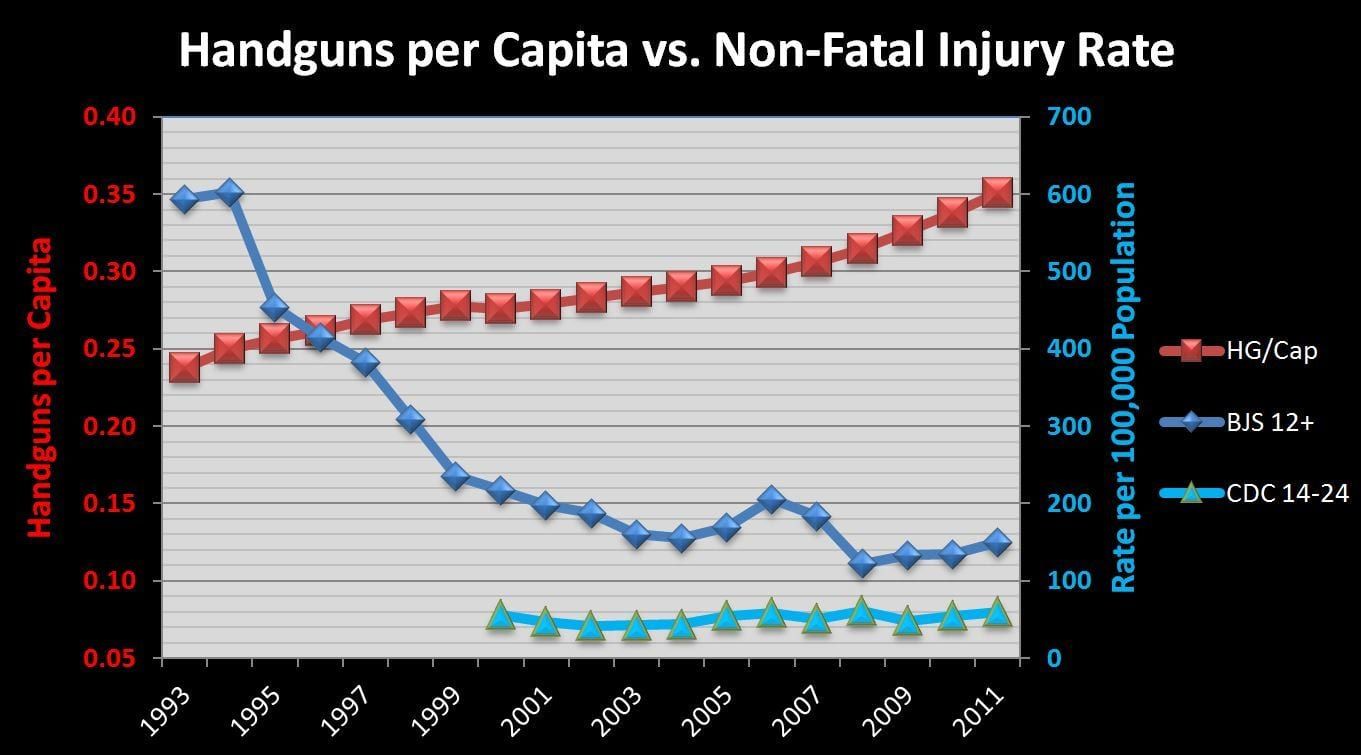 Researchers claimed that Flint’s crime rates are “are comparable to other urban centers, such as Detroit, Camden, and Oakland.” But compared to all cities over 75,000 population — Camden’s population is around 77,000 — Flint consistently ranked among the most violent. When comparing Flint to all cities over 75,000 population, it’s clear that Flint does not represent America: its violent crime rate averaged over 5 times the median rate, its murder rate averaged 13 times higher, and its aggravated assault rate averaged 6 times higher (see tables below).

Using manipulated data, these researchers, and their media allies, want to convince America that violence committed by exceptionally violent criminals in exceptionally violent communities proves there’s grave risk to our youth. But if they must lie to promote their agenda, why should we believe their claims that civilian disarmament will make us safer?

The unabridged and fully annotated version of this report is available at the Social Science Research Network.