Auburn, Maine, company Packgen has miles of oil spill containment boom on hand and has the capacity to produce upwards of 100,000 additional feet of boom a day. That inventory and that capacity has been available to help the Gulf Coast states for nearly a month. The news of this company was reported here at PJM four days ago, on June 8.

The curious case of the lack of interest in Packgen’s boom gets curiouser and curiouser. Yesterday, ABC News had an interview with Admiral Thad Allen, the national incident commander in charge of the BP oil spill in the Gulf of Mexico. After a handful of questions about the flow of oil into the Gulf from the wellhead, the topic turned to mitigation of the spill. Here’s the exchange:

Jake Tapper, ABC: I talked to a guy who runs a company in Maine that offers boom, and he has — he says — the ability to make 90,000 feet of boom a day. High quality. BP came there 2 weeks ago, looked at it, they are doing another audit today. He is very frustrated, he says he has a lot of high quality boom to go and it is taking a long time for BP to get its act together. Don’t you need this boom right now?

Allen: Oh we need all the boom wherever we can get it. If you give me the information off camera I’ll be glad to follow up.

There was no need for the admiral to ask for the information from Jake Tapper. It’s contained in a letter that has been on the admiral’s desk since May 21st. The letter was also sent to Secretary of the Interior Ken Salazar and to NOAA Administrator Jane Lubchenco. Copies were sent to Governors Bob Riley, Charles Crist, Haley Barbour, and Bobby Jindal. The letter was signed by two U.S. senators.

It’s not hard to come by. Here’s a copy: 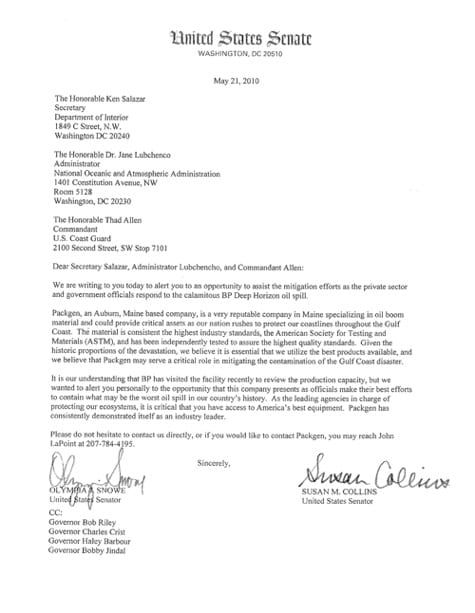 I interviewed Packgen owner John Lapoint at his facility in Auburn on Friday afternoon. BP today, once again, had representatives in the building to inspect his production line and his product, and to verify his assessment of his capacity to deliver more. BP is still not ready to commit to purchasing the oil boom, though.

Packgen’s boom not only passes every independent ASTM assessment, it’s apparently superior to the material currently being used in the Gulf. According to John Lapoint, it’s priced only slightly higher than oil boom that BP apparently normally purchases from places like China. And according to Packgen, boom manufactured in Auburn, Maine, on Monday can be onsite at the Gulf of Mexico on Tuesday. Boom from China normally has a lead time in months.

Packgen still has the 13 miles of ASTM certified floating oil containment boom, packed and palletized and ready to ship at a moment’s notice to the Gulf Coast.

That supply has been on hand for over a month, and in the intervening twenty-two days — between the time of the notification that Admiral Allen, Secretary Salazar, and Jane Lubchenco received, and today — Packgen says they could have manufactured and delivered approximately two million feet of additional boom, all of which could be helping to protect the coastline of the United States from the devastating effects of the BP oil spill.

The federal government has enormous power and responsibility when the United States is in danger from any large oil spill. According to the National Oil and Hazardous Substance Pollution Contingency Plan, the president is tasked with the mitigation of the spill:

If a discharge, or a substantial threat of a discharge, of oil or a hazardous substance from a vessel, offshore facility, or onshore facility is of such a size or character as to be a substantial threat to the public health or welfare of the United States (including but not limited to fish, shellfish, wildlife, other natural resources, and the public and private beaches and shorelines of the United States), the President shall direct all Federal, State, and private actions to remove the discharge or to mitigate or prevent the threat of the discharge.

In carrying out this paragraph, the President may, without regard to any other provision of law governing contracting procedures or employment of personnel by the Federal Government —

(ii) remove and, if necessary, destroy a vessel discharging, or threatening to discharge, by whatever means are available.

The wording does not equivocate. And the second part clearly states that the president can ignore any non-emergency government procurement hurdles to direct the mitigation of the spill.

If the federal government directs entities other than BP to mitigate the spill, does the American taxpayer get stuck with the bill? No:

Mitigation of damage. — In addition to establishing a penalty for the discharge of oil or a hazardous substance, the Administrator or the Secretary of the department in which the Coast Guard is operating may act to mitigate the damage to the public health or welfare caused by such discharge. The cost of such mitigation shall be deemed a cost incurred under subsection (c) of this section for the removal of such substance by the United States Government.

Recovery of removal costs. — Any costs of removal incurred in connection with a discharge excluded by subsection (a)(2)(C) of this section shall be recoverable from the owner or operator of the source of the discharge in an action brought under section 1319 (b) of this title.

The public deserves to know why the federal government continues to allow BP to determine who will supply desperately needed material for the mitigation of their massive spill, determine how much and what type of material will be needed, and even determine if and when it will be purchased or used at all, all while the Gulf Coast’s wildlife and industries slowly die in a haze of oil.

And while American workers who are ready, willing, and able to do the job stand idle. The ball’s in your court, admiral. Er — on your desk.