Let Us Count the Gulags 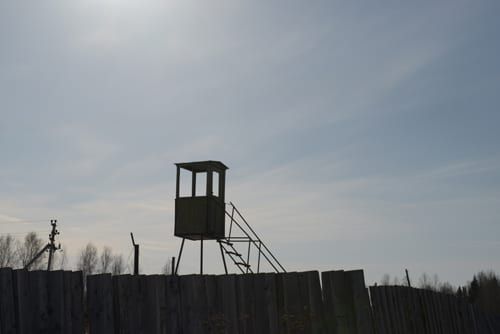 There are many threats to the continuity of the modern world, of which Islam in its manifold guises — international terrorism, the razia of unfettered immigration, Iranian nuclear ambitions — is the most prominent. But the Islamic agenda would not be what it is without the “progressivist” mentality and attendant policy making that are handing the barbarians the keys to the city. Islam and progressivism, to cite Jamie Glazov, are United in Hate. Indeed, as Executive Director of the Center for Islamic Pluralism Stephen Schwartz remarks in First Things, the deep complicity between Islam and the left goes a long way back, to the writings of the chief Communist impresarios, Marx and Lenin, as well as to lesser lights like Bolshevik intellectual Karl Radek. America’s far-left, pro-Muslim president has merely continued the dismal tradition.

Thus, we need to consider the broader canvas to which the camel in the room directs our attention. The obsession with multiculturalism that is destroying our civilizational patrimony is a sign of the feverish intoxication with the humanly improbable that characterizes leftist thinking: that we are all born equal (true with respect to rights, but not with respect to talent, intelligence or personal qualities); that sociopolitical changes can eradicate the flaws and blemishes of our nature (demonstrably wrong); that competition is a social evil that must be eliminated for the general advantage (pure fairyland); that education should be politically motivated to promote what is absurdly termed “social justice” (the death knell of critical thought); that tolerance for the “Other,” however defined, trumps due process in the courts (the erosion of equity); that ancient guilts require present expiation (rank unfairness); and, the great canard of our time, that all cultures are on an existential par, none being “better,” more ethical or more advanced than any other (manifestly false).

Hence the dogma of cultural and moral equivalence to which the liberal/left adheres, as practiced most conspicuously by the jerk in the White House and by the majority of our political, community and institutional leadership. No culture, religion or civilization, apparently, is superior to any other, an axiom derived, as I observed in a 2011 PJM article, “The Origins of Postmodernitis,” from the early anthropologist Franz Boas. Boas laid it down in his seminal The Mind of Primitive Man that all cultures should be regarded with sympathy, that we should hold the conviction that all “races” —  today we would say “ethnicities” —  have “contributed to cultural progress in one way or another” and that they are equally capable of “advancing the interests of mankind.” Unfortunately, as I conclude there, what started out as a methodological discipline in the field of anthropology has mutated into an intellectual sickness that regards our own culture as nothing more than a provisional adaptation. We are all, it appears, moral and cultural isomorphs.

The utopian malady runs deep in the leftist psychodrama. Consider the irony of the Charlie Hebdo attack. As Clash Daily contributor William Spencer-Hale points out, “The employees, artists, writers and editors of Charlie Hebdo were all true to life followers of the Church of Leftism. They…eagerly embraced all the tenets of liberalism. They, like so many of their fellow countrymen, voted to implement those policies that are the hallmark of the modern leftist. Among them being gun control and unfettered immigration.” The fantasy world continues to impinge upon the real one, regardless of deadly consequences.

There is a lesson to be learned from contemplating the lasting damage that such torpid maunderings and emotional convulsions can inflict.  Of course, one should try to be circumspect and impartial in one’s judgments. I recall in this connection James Madison’s summation in Federalist #55: “As there is a degree of depravity in mankind which requires a certain degree of circumspection and distrust, so there are other qualities in human nature which justify a certain portion of esteem and confidence.” In other words, both facets of human nature need to be taken into account in forming our view of life, arriving at a mature conception of morality and determining the substance of our political commitments. A strong element of human sympathy leavens Madison’s skepticism. But he had already recognized in Federalist #37 just where choice and temptation tend to lead, making him — like the Founders in general — a reliable authority on the follies and perils of uninstructed human nature and their political implications. The “brighter aspects” of our nature, he wrote, “serve only as exceptions to…darken the gloom of the adverse prospects to which they are contrasted.” Madison is referring chiefly to narcissism, self-righteousness and bickering self-interest leading to political faction.

Such vices are inherent in the utopian prepossession, issuing inevitably in the assumption of infallibility and the application of ruthless force. Utopianism envisages a world in which the concepts of merit, achievement, genuine novelty and civic responsibility have been retired in favor of the misguided and banausic program of affirmative action, mandated mediocrity and cultural self-abasement. And, according to its promoters, it is a world that must be imposed, whether through violence or legislation. As such it cannot be separated from what Madison in #37 calls the “infirmities of human character,” or what we might call the tyranny of results. As Milan Kundera memorably puts it in The Book of Laughter and Forgetting: “Once the dream of paradise starts to turn into reality…people begin to crop up who stand in its way. And so the rulers of paradise must build a little gulag on the side of Eden. In the course of time this gulag grows ever bigger…while the adjoining paradise gets even smaller and poorer.”

Gulags come in many shapes and forms. The physical hell the Soviets built. The moral and intellectual quicksand of leftist ideology. The prison-house of thought built by the mainstream media. And the fetid oubliette of the contemporary Academy to the legal and verbal constraints, aka political correctness, we ourselves impose upon our freedom to serve the purposes of those who would limit it. The conviction that Islam is a “religion of peace,” despite its millennium and a half of conquest, massacre, looting, slavery, punitive cruelty and cultural desecration, and that something called Islamism is merely a violent deformation of its central tenets, is a mental gulag that its deluded captives actually relish. Some gulags, it appears, are readily mistaken for idyllic acreage. They may not be discernible as gulags, but each is a cordon sanitaire of intellectual besottedness. The gulag from which one rarely escapes is a species of enchantment, namely, the shuttered enclosure of Edenic infatuations that inevitably brings and prolongs human suffering — the wages of cognitive imbecility. Living inside a stockade of groundless and uninhibited raptures does not represent a viable political future.

Whether we believe in the discredited canard of global warming, or the easily dispelled myth of Palestinian stewardship in the Holy Land, or the utterly transparent falsehood of Israeli apartheid, or the facile notion that anything but the Koran is the “root cause” of Islamic terror, or the lethal illusion that unbridled multiculturalism is a social blessing, or that big government stimulates rather than stifles economic vigor, or that gender is a social construct, or that we live in a rape culture or that being a white male is an unwarranted privilege — or any of a virtual calendar of such idols and figments, we are living in a gulag of our own gratuitous making. We are no longer self-reliant and independent human beings capable of responsible thought or of embarking on a free-ranging journey toward the truth of things.

Indeed, we have done more than surrender to the “infirmities” of our nature; we have consciously revalued them as ornaments of the moral life and embellishments of character. This is perhaps an even greater plummet than Madison envisaged, the cultural diagnosis of a crippling malady as a form of robust health. With this sordid declension in mind, one’s redemptive ambitions — assuming a modicum of sanity and prudence — should be oriented toward reality and not anchored in childish illusions, quixotic fictions and mellifluous fables. The world is a damn serious place and the romantic infantilisms, along with the venal calculations, of our elites must somehow be checked. Nor are ordinary people exempt from such rainbow apparitions. As Victor Davis Hanson writes in a comprehensive sweep of the political cretinism and cultural stupefaction afflicting the West today, “either the chaos grows and civilization wanes and tribalism follows, or the iron hand of the radical authoritarian Left or Right correction is just as scary, or a few good people in democratic fashion convince the mob to let them stop the madness and rebuild civilization. I hope for option three. I fear option one is more likely at home. And I assume that option two will be, as it always is, the choice abroad.”

All sensible people hope for option three. Only in this way is minimal progress at least conceivable — or at best, illimitable harm partially avoidable. We must not give up the effort to reclaim what we are in danger of losing. But reality compels us to recognize that options one and two are the more likely alternatives. German philosopher Johann Christian Friedrich Schiller was probably right when he declared, Mit der Dummheit kämpfen Götter selbst vergebens: Against stupidity the gods themselves struggle in vain. This is the self-imposed gulag from which even the Lord despairs of freeing us.

The bleakness of our condition, as Madison recognized, is only partly relieved by the thoughtful exceptions among us. Let us thank the Lord that they exist. But it is, I suspect, only when the gulag becomes unsustainable, when it collapses upon itself, that a few fortunate inmates may glimpse their salvation.