Everywhere I look, I see hybrids. Chevrolet’s new Volt, a “plug-in hybrid,” is in sufficient demand that some dealers are adding a $4,300 “market availability adjustment” charge, bringing these cars up to $49,000. Can’t anyone do math?

I like the idea of an electric car — and I especially like the idea of the Chevy Volt. It is mechanically simpler than the Toyota Prius. Recharging from house current is very economical for those who are going to primarily use the Volt for commuting. But there is no economic sense to these cars.

Buy a Chevy Volt at the suggested retail price of $40,280. If you only use it in electric mode (plug it in every night, and keep your total driving down to about 40 miles per day or less), yes, you will get what the EPA considers the equivalent of 95 miles/gallon in the city. That’s pretty impressive — but there’s a popular misconception about mileage that makes this sound better than it is.

Drive a gas-guzzling SUV that gets 10 mpg 15,000 miles a year; that’s 1,500 gallons a year. Get a more efficient SUV or midsized sedan at 20 mpg. That same 15,000 miles a year consumes 750 gallons. Double the gas mileage, and you cut your gasoline cost in half. If you triple your mileage, your annual consumption is 500 gallons. That’s better than 750 gallons, obviously, but not as dramatic a gain as going from 10 mpg to 20 mpg. A 60 mpg car would burn 250 gallons. Each 10 mpg improvement in gas mileage gives a progressively smaller savings in fuel costs — an asymptotically declining improvement. 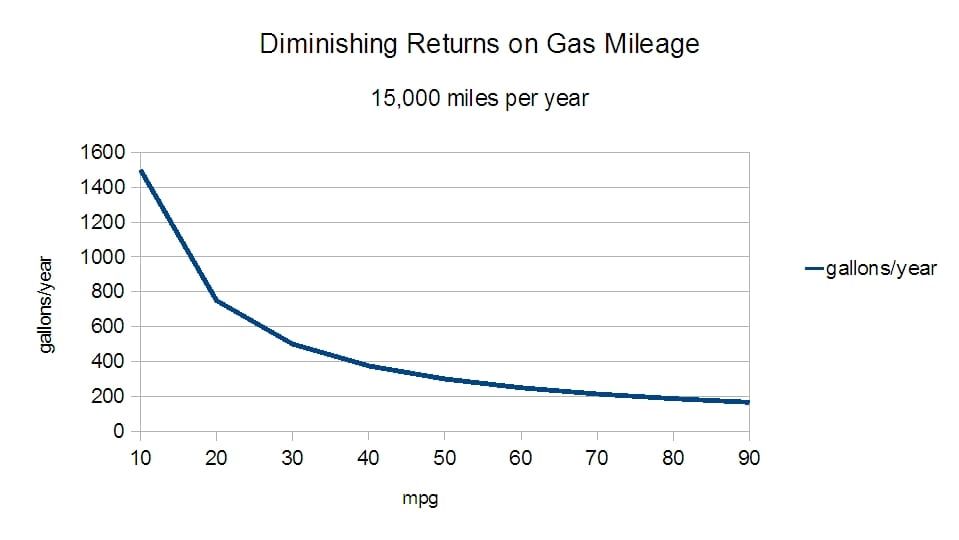 Obviously, getting 50 mpg is better than getting 10 mpg. But the capital cost of that improvement is dramatic. Even at the suggested retail price of just over $40,000 for the Volt — even after you get the benefit of the $7,500 federal tax credit for buying a hybrid — you are still paying far more for a Volt than a more conventional automobile. If you are really concerned about gas mileage, the Chevrolet Aveo has a suggested retail price of $11,965, and the EPA city fuel economy estimate is 27 mpg. How much gasoline can you buy for the difference in price?

Of course, all of this assumes that you are starting from scratch. If you already have a car that gets more than 30 mpg on the highway, like mine (no, really, it does!), taking a bath on the sale of it to buy a hybrid to save money makes even less sense.

There might be a case for buying the Volt or other hybrids, but it isn’t based on economics. It is based on bragging rights, on showing everyone how concerned you are about Mother Earth. There is nothing intrinsically wrong with any of these things, but you have to be pretty darn rich to afford them.

There is another problem with this economically inefficient activity. Many years ago, I toured the first big solar power demonstration plant in the Mojave Desert — Solar One, near Barstow, California. It was very impressive: a vast array of mirrors, reflecting sunlight onto a boiler. There was a lot of electricity used in making all the glass for the mirrors, the electric motors, the boiler, the computer systems controlling all this, the posts holding the mirrors, and aluminizing the glass to make the mirrors (a very energy intensive process). I asked the tour guide: “How do we know that the system is a net producer of electricity? Even if it is a net gain, how much net gain?” She had no idea.

Eventually, I received a letter that admitted: They had no idea. The enormous subsidies that went into this project made it impossible to figure out what (if any) net gain there was. Energy is a major part of the cost of many alternative energy systems, and energy costs money.

How much energy is going into making the batteries that go into these hybrids? How much energy is spent transporting the batteries from China? How much will be spent recycling those batteries at end of life? When you see one of the “Save Mother Earth” projects that requires federal tax credits and is still a bad economic deal for the buyer, my immediate suspicion is that it is hiding an enormous energy input that destroys most of the ecological reason for doing it.

There may well be a case for the government subsidizing basic research or demanding new technologies. Throughout American history, such subsidies or government purchases have often more than paid for themselves in technological development and economic growth. Interchangeable parts and the development of the vertical milling machine are both results of government musket contracts in the 1790s, for example. Microprocessors and the Internet have similar U.S. government origins.

R&D encouragement, however, is not the same as subsidies to production, which can introduce severe distortions without producing much of value. Corn ethanol subsidies are among the most obvious of these — but in another ten years, we are probably going to see a lot of “green” technology, such as hybrids, fall into the same category.