New Documentary on Pat Tillman Is a Blindside Tackle

The Tillman Story recalls the remarkable life of NFL standout Pat Tillman, the bruiser who ditched millions for the chance to serve his country.

It’s also the latest film to assault the military and former President George W. Bush — although the former brought some heat on itself. It’s a minor miracle the images from Abu Ghraib didn’t make the final cut.

Tillman is shrewdly assembled by director Amir Bar-Lev, a rare documentary that doesn’t fall back on slick animation or other tics to keep us engaged. It’s also uniformly one-sided. The film testifies to Tillman‘s fighting spirit and the tight-knit family which forged his character. In between, the movie tries to spin the Tillman myth in incredulous directions.

The film is anchored by Dannie Tillman, Pat’s mother, as well as the rest of his nuclear family. They recall their emotional evolution from horror to outrage as the story of Tillman’s death shifted over time.

A very private family endured the public mourning when news broke of Tillman‘s death. Once the truth trickled out — he died at the hands of his fellow Rangers in a tragic accident — they got suspicious. The family’s investigation led all the way to … President George W. Bush, the man whose party wanted to use Tillman’s “heroic” death as a recruitment tool.

The only problem is the “conspiracy” in question showed its cards five weeks after the tragedy. That’s when the military revealed the nature of Tillman‘s death after the initial investigation ended. Government officials also handed over thousands of pages of investigation notes to the family. Much of the material was redacted, which set the family’s Spider-sense a tingling. 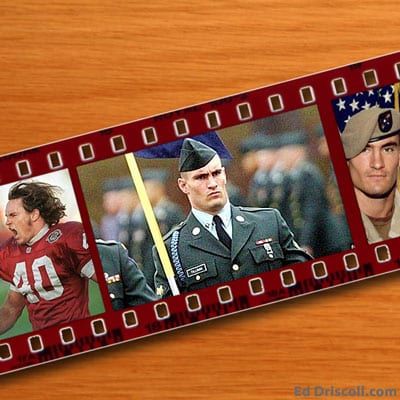 It’s one thing for a grieving family in search of closure to see wickedness around every document drop. But Tillman can’t really connect enough dots to make the charges stick. It’s common for information initially recorded during war to be wrong, or incomplete, something the film admits and then conveniently forgets. Some military members were told to hush about the case in those first few days after Tillman’s death, but that could simply be so the investigation could run its course before any official information leaked out.

After all, Tillman wasn’t just another soldier.

But those angles aren’t included here. In fact, the military isn’t allowed to speak on its behalf during the film, nor do we hear from neutral military experts who might shed light on the matter.

So we’re left with a grieving family funneling its energies toward the possibility of a vast conspiracy, and a director eager to pour gasoline on any fires they stoke.

That doesn’t make the military any less guilty for spinning Tillman’s death so efficiently in the immediate aftermath of the incident.

And there’s a fine line between leaders helping to rally the nation around the war effort and exploiting its own fighting men and women for that cause. The film reminds audiences of the Jessica Lynch affair, Exhibit A for how not to go about such an effort.

We’re privy to plenty of anti-military rhetoric in between testimonials to Tillman’s unflappable character. One Ranger says he didn’t join the armed forces for patriotic reasons, but for selfish ones. Why does that matter to the story if only to throw a negative light on a soldier‘s sense of duty?

And Dannie Tillman’s theory on the reason her son died is rather ugly, saying his fellow Rangers had a “lust to fight.” That’s a heated, and potentially unfair, way to slander men who will have to live with the death of a comrade on their hands for the rest of their lives.

Frankly, for her protection the scene should have been left out. A grieving mother shouldn’t be exploited.

Other anti-military moments seep in, too, like the outrage expressed in the film over the ban on photographing flag-draped coffins en route to the U.S. It’s merely taken as an article of faith that the public should see those pictures. Can’t we hear the other side of the issue?

The film’s most poignant moments belong to the Tillman family. The future Ranger and his two brothers kicked up a ruckus around the home, cussing like sailors but sticking by each other as only brothers can. Tillman married his high school sweetheart, and in several sports-related interviews comes across as blunt but selfless.

He was a hero even if he never fired a shot in Afghanistan or Iraq, and it’s impossible not to mourn right along with this impressive family unit.

Minor coincidences are trotted out like a shooting gallery of smoking guns, but some fire only blanks. Attempts to pin the cover-up on President George W. Bush are weak, but more incriminating are the actions of the generals who claim not to remember a memo the film insists is proof of a cover-up. Again, here’s where a neutral observer might offer more definitive proof.

The Tillman Story, despite its urgency and relentless pace, turns the subject’s death into something he would have cursed. The real Tillman didn’t want to be a recruitment tool, but in the hands of Bar-Lev he’s become a tool for those eager to swat the Bush administration, an irony lost on everyone involved.

Christian Toto is the editor of HollywoodInToto.com — "The Right Take on Entertainment." He's an award-winning journalist and movie critic whose film reviews are heard on radio stations across the country. He co-hosts Denver's Mike Rosen at the Movies radio show on KOA NewsRadio as well as the weekly "Hollyweird" segment on The Michael Brown Show.
Read more by Christian Toto