From Heli-Drones to Drone Boats: Inside the Drone Expo 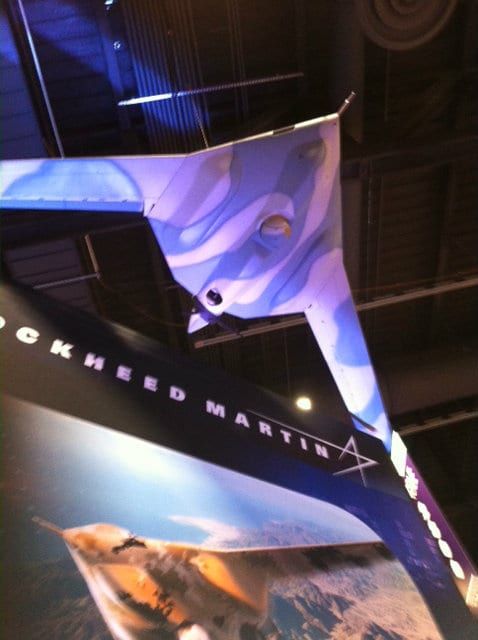 Dronepalooza. Droneyland. Dronestock. I had a slew of aggrandizing nicknames for the Association for Unmanned Vehicle Systems International conference heading into this week, looking forward to my inaugural drone expo. The size and scope of the event did not disappoint. It was essentially one-stop shopping for farmers and warfighters alike, a bevy of unmanned aerial systems and components, robotics technology for unmanned vehicles, IED-defusing and reconnaissance robots, and more.

And when we talk shopping, that was one of the more fascinating aspects of the megaconference that swallowed three giant exhibit halls and numerous conference rooms at the Washington Convention Center. Foreign military officers mingled throughout the crowd and stopped for long conversations at the booths, carrying sponsor tote bags and filling them with swag, informational brochures and business cards. Among the countries whose officers I spotted were Israel, Canada, Italy, Azerbaijan, Ukraine, and Senegal. I saw officers from Serbia and Kosovo, naturally on different sides of the hall. And then I passed an officer from… Pakistan.

Yes, the country that heartily criticizes the U.S. for drone use was drone shopping in Washington, D.C. One of the mega-contractors at the show told me they had no dealings with Pakistan. One of the companies at the show under contract with the Pentagon to provide Pakistan with ground robotics technology told me they hadn’t seen the officer come by. So what was in his shopping bag is still a mystery. 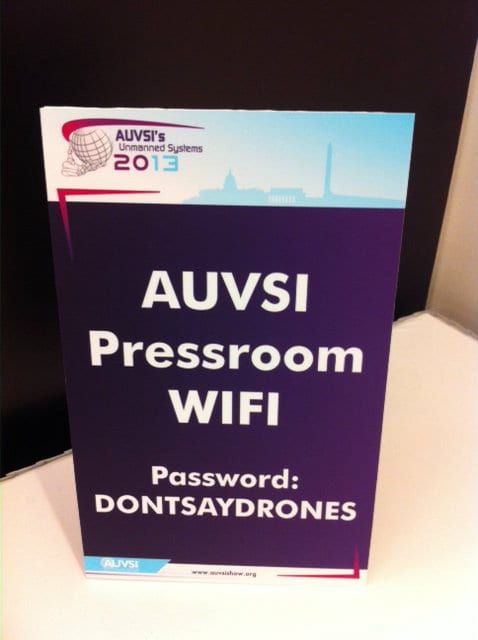 AUVSI treated the press to an oversized filing room with couches, power strips, sodas and water, chips and Nutri-grain bars, and free WiFi. On Tuesday, the password was tacked on plain white paper on a distant wall, where I couldn’t find it. When I asked a conference worker for the password, and she pointed it out to me, I burst out laughing.

By Wednesday, after the drone association had taken ribbing for password, these colorful signs were propped on each workstation. 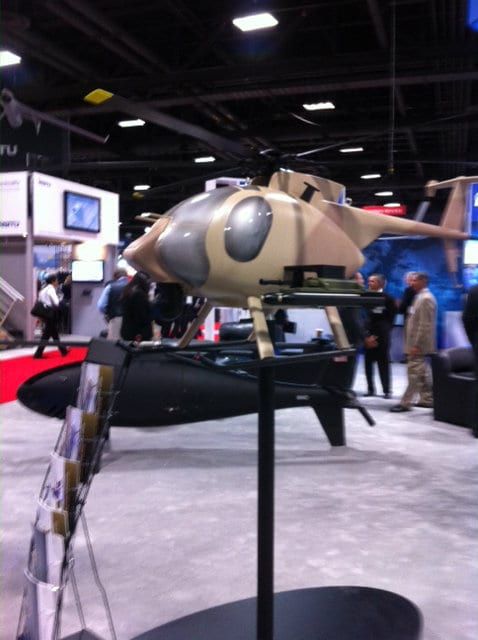 I found this Boeing heli-drone one of the most intriguing, though I’m not sure the guys behind the program had heard it called cute before. The Unmanned Little Bird H-6U can go for 10.6 hours with a 300-pound payload and a ceiling of 20,000 feet. The compact chopper is used for maritime operations, intelligence and surveillance, precision cargo resupply, precision weapons delivery, and as an unmanned component of a manned team.

Even though Little Bird is packing some heat here, the Boeing reps pitched less explosive uses to me, such as flying into a smoky wildland area to find hotspots during a wildfire when conditions would make it dangerous for manned helicopters to plunge into the region. It was one of many examples I came across at the show of businesses pointing out public safety potential of drones as privacy advocates are trying to enact safeguards in connection with government use. 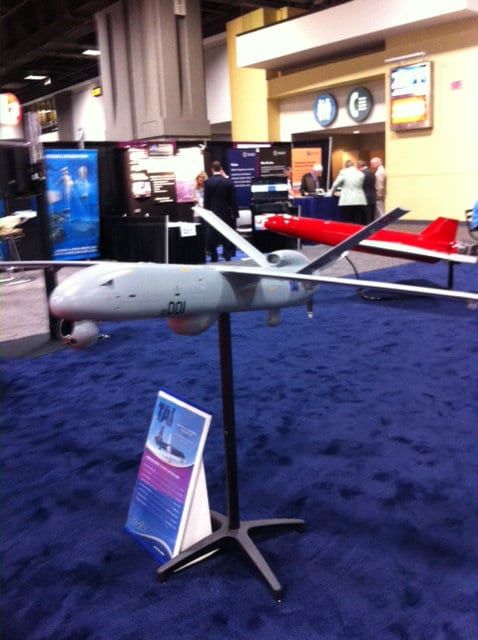 Drones came in all shapes and sizes, and from a range of countries as well. These are from Turkish Aerospace Industries.

The ANKA Medium Altitude Long Endurance UAV System, in the foreground, can fly for 24 hours at a ceiling up to 30,000 feet. The reconnaissance craft billed as “easy maintenance” are used by the Turkish Army. In the background, the red TURNA Target Drone System has been used by the Turkish Armed Forces since 2001. “The highly cost-effective system, which has an open architecture design that can be shaped in accordance with the needs of the customer, has proven its affectivity during real firing missions at operational areas with its distinctive simulation of air threats and missiles capability, high maneuverability, high speed, ease of operation, low mission risk and modularity,” the company says. “TURNA is used for tracking and firing exercises of radar, optically, thermally or manually controlled barreled anti-aircraft guns and guided missiles.” 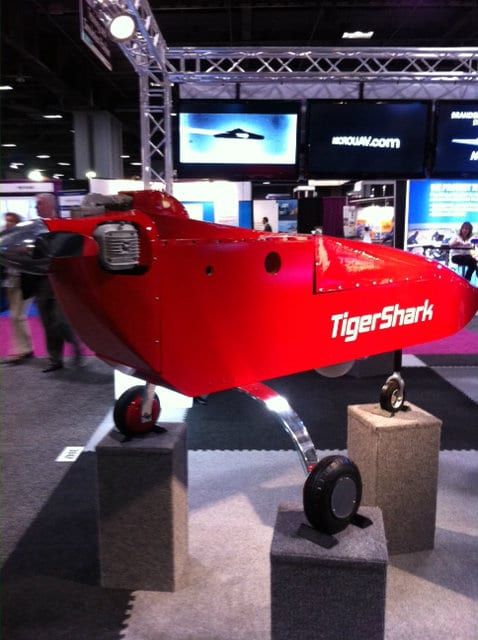 In the market for a bargain drone? This little guy will run in the $50,000 range and can be assembled at home. The Brandebury Tool Company, Inc., TigerShark is made of laminated plywood for a high strength to weight ratio and can put in about 12 hours of flight time. The airframe pops together easily with lightening holes, slot sockets and tabs. It weighs about 150 pounds and can take on that much in a payload. And you might notice the little dome on the bottom — a camera. Rand Paul would notice it. 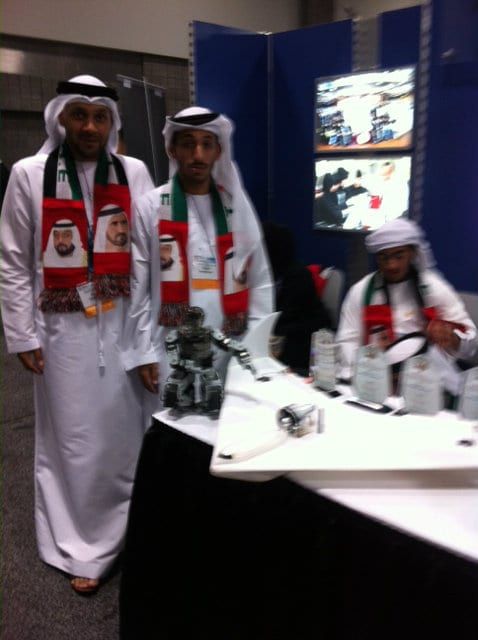 If you’re searching to the ends of the earth to find that perfect drone innovation, try engineering students. Northrop Grumman held a UAV Innovation Challenge to find the smartest guys in the classroom and the top honors went to Emirates Robotics from Dubai Men’s Campus of the Emirates’ Higher Colleges of Technology.

The guys told me that they were tested on flight endurance, accuracy in a controlled course, and speed. That drone on the table, with awards lined up behind it, is mostly Styrofoam and plywood. They also brought bags of dates to share with passers-by.

“These types of highly technical, multidisciplinary projects in aerodynamics and aerospace will help shape the UAE’s future capabilities,” Yousef Al Otaiba, the UAE ambassador, said. The students were frequently breaking away from the booth in pairs to roam the exhibit hall and ask questions of more seasoned engineers. 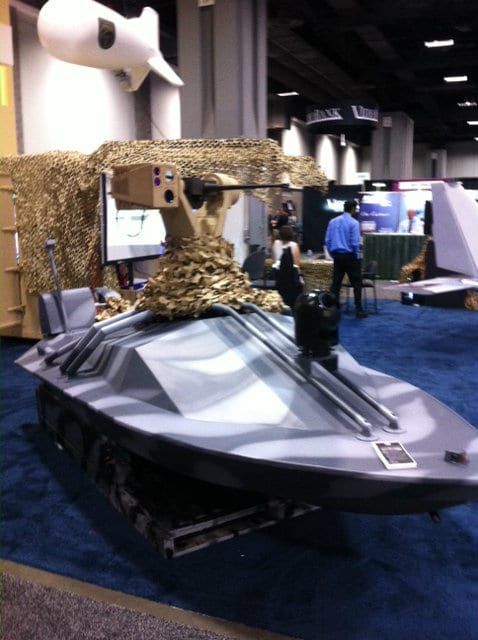 It wasn’t all just eye-in-the-sky unmanned vehicles. The DragonSpy by Neany Inc. shows as a small buoy on radar and runs on a 30 gallon fuel tank standard, unless you want to upgrade to battery cells in an electric motor indiscernible from 20 feet away. Supplemental floatation means the boat can completely fill with water and not sink. Carrying capacity is 600 to 700 pounds depending on your power option.

And that little guy on top? A 7.62mm externally powered machine gun. Could come in useful at some ports of call. 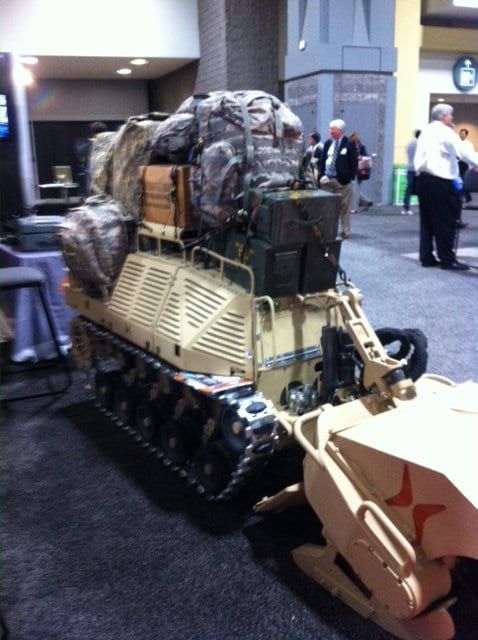 Much of the conference was focused on how to move equipment in and out of battle zones using unmanned systems. HDT’s Protector bulldozes the path trying to dig up hidden explosives while carrying the infantry’s stuff on top. It can be remotely controlled from up to 1,300 feet away. 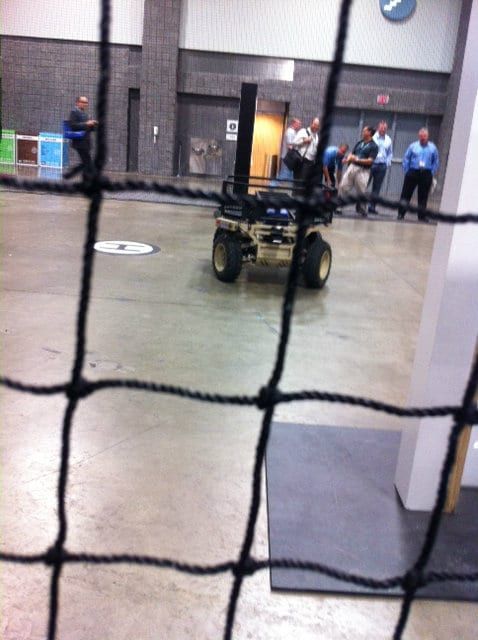 And not all unmanned vehicles led the way, but followed with robotic intelligence. This demonstration showed a vehicle that could follow a soldier on nearly any terrain, sensing objects in its path and adjusting the route accordingly, and basically trailing like a little puppy while carrying whatever it could. 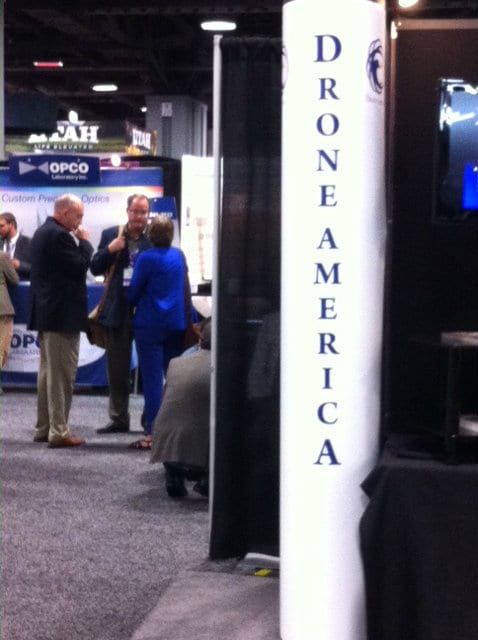 But in the end, after the privacy debates and businesses’ fear of privacy legislation, maybe Rand Paul was right…