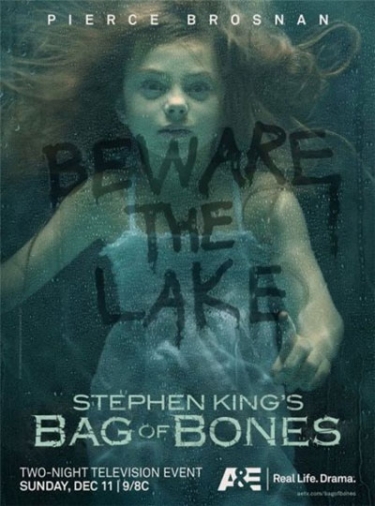 I'm taking my talent and swimming for shore!

Boy, this blew. And while I haven’t read the 1999 Stephen King novel on which it was based, I have read a lot of King and I’m pretty sure this one isn’t his fault. In fact, while the two-part, four-hour A&E adaptation can’t escape King’s generally minor weaknesses (I mean, does EVERY protagonist have to be a horror novelist?), it manages to utilize none of his amazing strengths. Because, unlike a lot of very popular novelists I can think of, King is really good. His writing is gripping and innovative, his timing is brilliant. And he’s scary. Like, really scary. By which I mean, he has scary ideas that don’t depend on tricks or gore or shock—even if he occasionally augments them with that sort of thing. I remember reading Tommyknockers, a lesser King that goes on for some 800 pages about how something really, really scary is in the shed in back of the house. By the time I got to the end, I was thinking, All right, brother, what’s in that shed better be pretty damned scary. Then they opened the shed…  and I thought, Yup, that’s scary. I’m scared now. Should never have opened the shed.  I mean, that takes real talent, skill and imagination and King’s got it every which way.

Director Mick Garris and writer Matt Venne, on the other hand, have nothing to offer here scare-wise except for repeated boos and startles and rotting skeletons jumping out at you from various directions. Which is actually NOT scary. It’s startling. It’s annoying. But who cares?

As a result, a summary of the mini-series plot would look something like this:

Dreadful. Pierce Brosnan phones in the starring role long distance. In fact, as far as the acting goes, only talented 7-year-old Caitlin Carmichael and the achingly appealing Anika Noni Rose make it out more or less alive. And then a skeleton jumped out at them!!!